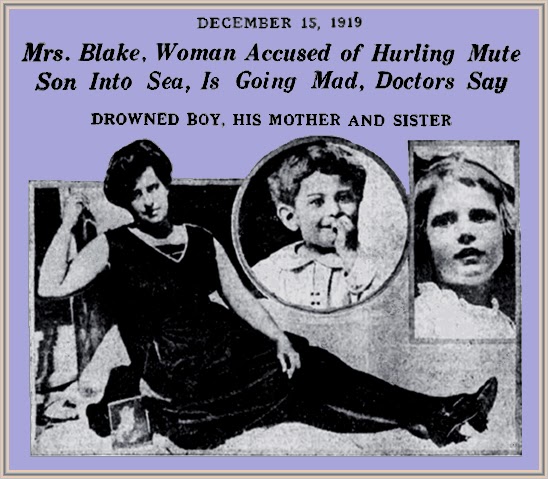 FULL TEXT: Atlantic City. Dec. 14. — The body of five-year-old "Buddy" Blake, the mute boy, whose mother reported Friday night that two negroes had kidnaped him, was washed up on the beach at Ventnor to-day by a rising tide. An autopsy showed that death was due to drowning.

The little body was identified as it lay on the beach by the grief-stricken father, James Blake, an insurance broker, of Philadelphia, who has an apartment here.

A few hours later, while the boy's body was being removed to an undertaking establishment, his mother, Mrs. Esther Blake, whose husband obtained a legal separation from her four years ago, was taken in an ambulance from her lodgings to the Atlantic City Hospital. When she had been placed in a ward bed she was served with a warrant charging that she had murdered her son by drowning him.

Apparently Mrs. Blake, whose relatives and friends believe she is demented, was unmoved as William Sprague, Chief of Police of Ventnor, read the warrant. She shrugged her shoulders indifferently when a policeman took his post at her bedside to prevent her fulfilling a threat to kill herself.

As Chief Sprague turned to leave, remarking that he would return in the morning and hoped she would tell the truth about "Buddy," Mrs. Blake said:

“Come back to-morrow and I'll tell the same story. Two negroes stole ‘Buddy.’ Why don’t you find them?”

Samuel Blair, of Margate, standing along the boardwalk this morning with his chin tucked into the upturned collar of his ulster to avoid the wind-driven rain, saw that the high waves breaking on the Ventnor beach at half flood tide had washed ashore the body a yellow-haired child, clad in a gray sweater suit and blue leggins.

Blair climbed down from the boardwalk to the beach, waded into the surf and carried the little figure under the boardwalk out of reach of the breakers. Then he sought a telephone and notified Chief of Police Sprague, who before starting for the beach dispatched a policeman in an automobile for James Blake in Atlantic City, about live miles north.

When Mr. Blake arrived he looked at the body a moment, leaned over as though he would hold it in his arms and then straightened up with twitching face. A policeman put his arms across Mr. Blake’s shoulders and led him back to the automobile.

"Buddy's" affliction had intensified the affection his father felt for him, and his friends say that he was overjoyed recently when the child managed to articulate two words that he had learned from rapt listening before a phonograph. These words constituted his entire vocabulary, but to the father they meant that there was a chance his son might in time learn to speak like other children. like other children.

The body had been washed ashore near New Haven Avenue, Ventnor, four blocks below the Ventnor fishing- pier. The finding of Mrs. Blake's handbag on this pier Saturday morning caused the police to abandon their search for two negroes Mrs. Blake insisted had kidnapped her son. From that time they endeavored to gain from her a confession that she had thrown the boy from the end of the pier. Chief Sprague said last night:

“Mrs. Blake has told us in the course of repeated questioning that this mute boy stood between her and her husband. I asked her why, but she refused to explain. Her husband says there is no basis for such a belief.”

“They were legally separated in Baltimore four years ago. He told us he didn't know whether his wife was addicted to drugs, but said she took a lot of medicine.”

“After the separation Blake invited his wife's mother and sister to keep house for him and take care of his children, which were awarded to him. They have been doing so ever since and as far as possible have sought to avoid the wife. Blake has moved many times, he told us, but each time his wife followed and rented a room near the new home.”

“Blake moved here last summer and soon afterward his wife rented a room near his apartment. He pays her an allowance of $20 a week.”

“Mrs. Blake was permitted to see her two children as often as she cared to. but she was not allowed to take either, or both, of them out of the house unless Mrs. Miller, her mother, or her sister accompanied them. The father told us he feared she would take the children away and hide them if she was given an opportunity.”

“On Friday afternoon Mrs. Blake coaxed her mother to let her take ‘Buddy’ for a ride in an automobile. The father’s worst fears were confirmed. We have accounted for her movements after she left the house, except for an hour, between 5 and 6 o'clock, when she pounded on the door of the home of Benjamin Fox and told the story about two negroes kidnaping the boy.”

“We know she went to the office of Dr. William Fox, 1616 Pacific Avenue, and loft there at 4:40 o'clock. At 5 she bought an apple for the boy in Kentucky Avenue. She has told us four stories about her movements since then. We haven’t been able to verify any of them or learn whether she came to Ventnor, about thirty minutes’ ride in a jitney, or on the streetcars. “She was as cool as a cucumber when I went to see her this morning. I asked her if she had slept, and she said”:

“’I had very little sleep, because you accused me of murder.’” 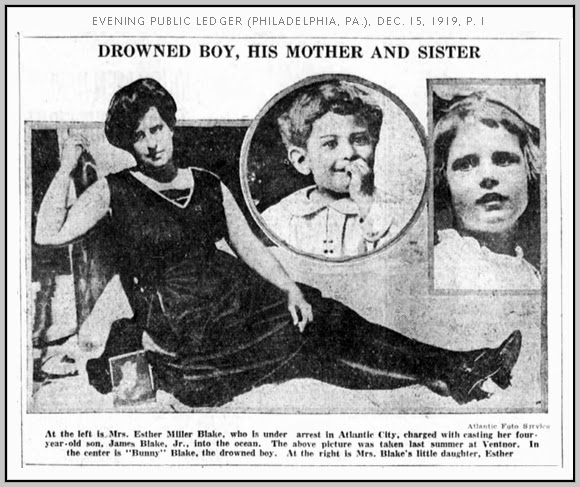 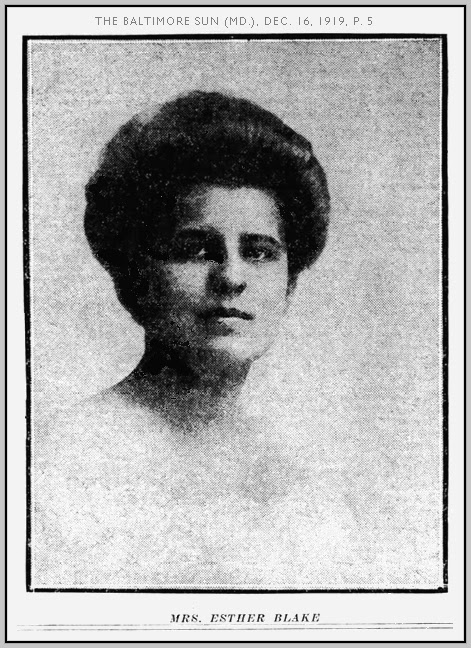 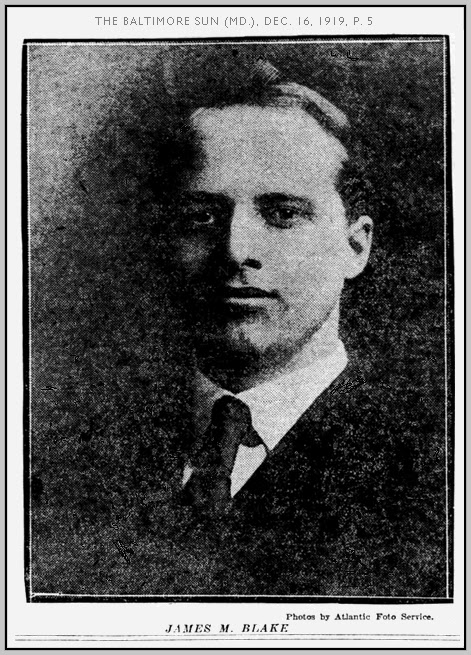