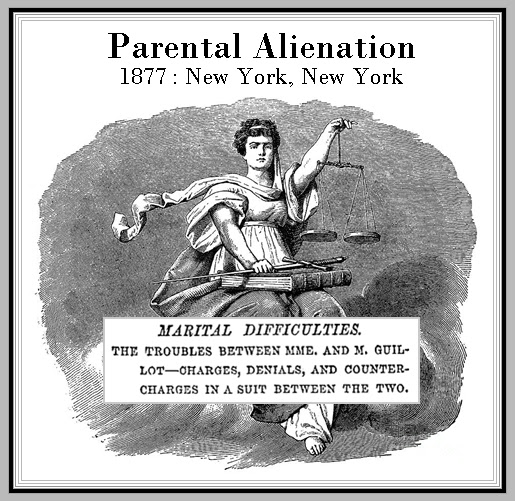 FULL TEXT: One of those cases of marital difficulties with which the courts have of late been overcrowded was argued at length before Judge Robinson, in the Special Court of Common Pleas [New York, N. Y.] yesterday, on a motion for alimony and counsel fee. The suit in question is brought by Mrs. Annette Guillot against Modeste Guillot. These parties are of French extraction, and were married in Paris in August, 1856. They have two grown-up children named respectively Matilde and Calixte. The action is for a limited divorce, on the ground of the defendant’s alleged cruel treatment of the plaintiff, beginning, as the latter says, about a year after their marriage. In 1857, she says, he abandoned her at Paris. She says she was left entirely destitute of means, and with a three-months-old baby to look after. Her husband surreptitiously came to this country. After a time he sent for her, but when she came here she found him living with another woman, whom he left very reluctantly, and only after the most urgent remonstrances. Because of his being compelled to cease his relations with this woman, Mrs. Guillot says he evinced toward her an ungovernable hatred, and began to treat her in a cruel manner. She says she has been a faithful wife, and has aided him in his work, which was that of a tailor, and that through her exertions and economy he has acquired a good commercial position, and has accumulated money. She changes him with abusing and beating her, and with “vilifying her character and poisoning the minds of their children against her.” Thus, in July, 1873, she says he went off and was gone from home for three days, leaving in her absolute ignorance of his whereabouts. When he returned he locked himself in a room with her, and proceeded to beat and kick her so that she was sick for eight days. In January, 1874, she says he nearly choked her to death. At another time he knocked her senseless, and on a subsequent occasion threw a large piece of marble at her, which might have killed her had she been struck by it. About two years ago she says he abandoned her, though she admits that he has paid her $7 a week ever since. She says, however, he can afford to pay her $25 or $50 per week. She asked for alimony and counsel fee.

In opposition to her story, her husband denies all the allegations of cruelty and abandonment, both generally and in a specific manner. He says that before leaving Paris he provided his wife with money for her support. She was then living in her brother’s house. Mr. Guillot says she knew where he had gone, and that he sent her money from time to time. He denies having lived with another woman, and, says he and his wife lived happily until, a few years ago, he found her too familiar with Emile Sigrist, the cook of the New-York club. One evening, he says, he saw the two together in front of the club-house, and told his wife to go home with him. She did so, and when, after their arrival at the house, her remonstrated against her against holding conversations with Sigrist, she became angry, and began to throw various articles at him, and he then clutched her by the arm and told her never too give utterance to it again.This he says is the true story of the alleged attempt to choke her. In regard to throwing the piece of marble at her, he says that happened in this wise: He had been very sick for weeks and while convalescing was one day lying on the sofa: his wife came to the room door, opened it, and in loud tones said, in French, “Miserable! You old carrion! I know you will soon rot and die, and I will be glad of the day when they put you in the grave and cover you with dirt.” Made delirious by these remarks, he says he picked up a small piece of marble and threw it toward where she was standing. He was too feeble, however, and it did not reach her. He met her at a picnic afterward with Sigrist. Her conduct there, he says, was such as to call out unfavorable criticism, and he chastised Sigrist. He says she has a bad temper, and that from her conduct it was unsafe and improper for him to live with her. He provided her, however, with lodgings of her own selection, and has been paying his own expenses and providing for his children. David Crawford appeared for the plaintiff on the motion for alimony and counsel fee, and Jesse K. Eurlong represented the defendant. Judge Robinson, after hearing the arguments, took the papers, reserving his decision.