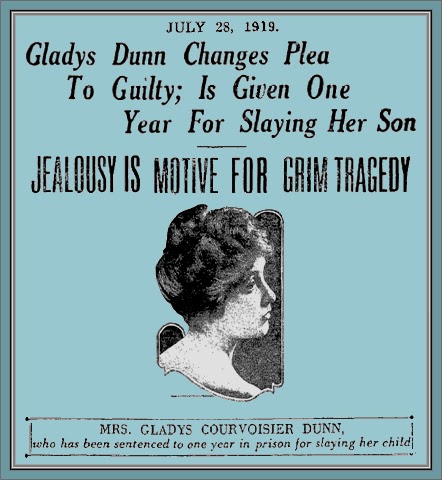 FULL TEXT: Pittsfield, Mass., July 28.— Pale, as if all color in her face had been removed by acid, her limbs trembling. Mrs. Gladys C. Dunn. former beautiful society woman of Oakland, walked to the petitioners' rail in court here today on the arm of her attorney and brought her trial for murder to sudden and unexpected end by pleading guilty to killing her three-year-old baby boy.

She was sentenced to one year at hard labor in the Pittsfield house of correction.

The plea brought to a close one of the strangest stories of jealousy that ever was told, a jealousy that was the fruit of long unhappiness crowned with joy at the love of the novelist and editor, J. Allan Dunn, only to be lost when her own baby boy, she thought, was winning from her husband the attention which she wanted for herself alone.

~ JEALOUS OF BABY BOY SHE SHOOTS HIM. ~

All the love of mother for child fled before this sweep of jealousy, according to the story of Mrs. Dunn; she hated the beautiful boy for whose life she had gone herself close into the valley of death. So she shot the child as he sat in his wicker chair at the Lenox home of her husband. Her effort to kill herself failed.

The husband was in court today and rushed to his wife’s side when she made her plea, and tottered as if on verge of collapse. A writer of fiction, a dealer in emotions. Dunn had found in his own wife an emotionalism beyond the dreams of a fictionist, a nature beyond all reckoning.

Summer resort spectators crowded the court today when the trail was to be resumed after the complete collapse last week of the defendant. These curious ones craned their necks as the woman went forward, haltingly, often seeming as if she would fall before she reached the rail.

The decision to change her plea, after the trial has proceeded for three days, was communicated to Justice Brown shortly after court convened today by John F. Knoxson, leading attorney for the defense.

When he reached the rail, the clerk turned to her.

“Gladys Dunn, do you wish to change your plea?” he asked.

Her voice was barely audible, but she spoke with only a slight pause after the first word:

“Yes – I plead guilty to manslaughter.”

Her husband led her to a chair and district Attorney Ely began a brief review of the case for the prosecution. He told of the state’s theory that the crime was committed as the result of a wild fit of jealousy after a quarrel with her husband.

“This case is one of the most pathetic in the criminal annals of the commonwealth of Massachusetts,” he said.

In pronouncing sentence, Justice Brown explained why he would not inflict a long prison term.

“There are certain things,” he said, “that bespeak an unsound mind on the part of the defendant. But it must be remembered that in the quarrel which preceded the killing of the child she had no weapon. She had to go upstairs and procure a weapon before the deed was committed.”

“In view of what I believe the defendant has suffered and what she will suffer, the court is disposed to leniency. What I could impose would add to the torture she already has suffered. The court therefore accepts the plea of guilty of manslaughter and sentences the defendant to one year in the house of corrections at hard labor.”

Women in the courtroom hurriedly rushed outside and lined up on the courthouse steps, but the sheriff, fearing a repetition of earlier incidents when Mrs. Dunn was reviled, kept her secluded in his office until the women grew weary and went away.

Testimony at the trial showed that after shooting her son, she desired to shoot herself but did not succeed because her husband had removed the bullet clip from the automatic pistol. She seized a bottle of chloroform and took a draught which nearly caused her death.

Her attorney, in summing up the case for the defense, spoke of her intensely affectionate nature and the effect that the quarrel with her husband had upon her.