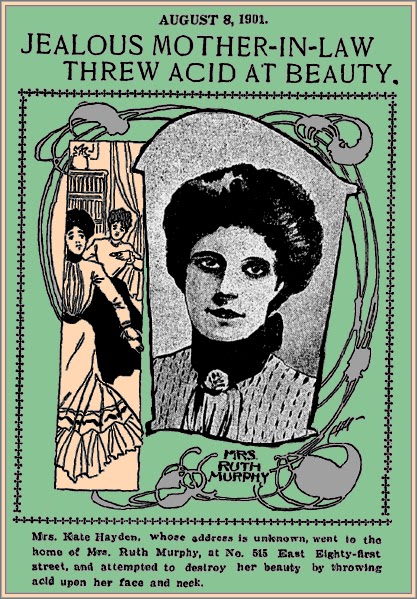 FULL TEXT (Article 1 of 3): Made desperate by the complaint of her neglected daughter, Mrs. Kate Hayden, whose address is unknown, went to the home of Mrs. Ruth Murphy, at No. 615 East Eighty-first street, and attempted to destroy her beauty by throwing acid upon her face and neck. Mrs. Hayden is a fugitive from justice.

Her daughter Is Mrs. Joseph Cawfold, of No. 322 East Thirty-fifth street. She is delicate and subject to melancholy. When Mrs. Hayden went to see her last Tuesday night she was crying. She said tier husband had not been home all day, and she feared he, might have gone to the home of Mrs. Murphy with his brother Nicholas, who is engaged to be married to Mrs. Murphy’s sister. This story and the suspicion that her daughter was being slighted by Mr. Cawfold made the mother angry. Leaving the house in a rage, she bought a bottle of carbolic acid.

Mrs. Murphy and her unmarried sister live with Mrs. Catherine Manning, another sister. The women are refined and educated. They were school teachers in Dublin till they came to America four years ago. One is a music teacher and another has written magazine articles. The sisters say that Cawfold has called on them only three times and has never shown any attention to Mrs. Murphy. But the fact that his wife is plain, while all of the sisters are beautiful, made his mother-in-law suspicious.

“The vague complainings of her daughter seem to have turned her head,” said Mrs. Murphy yesterday, “for she came in here demanding, that I return her son-in-law. My husband is not at home. He is a bookkeeper at Ward’s Island. Nicholas was here sitting on the sofa with my sister. Mrs. Hayden burst in the door and exclaimed: ‘I’ll teach you to steal another’s husband. I’ll disfigure you for life!’ She threw the acid from the bottle at me. It burned my neck and back.

“Nicholas sprang to save me and was burned on the face. My sister’s little children clung to the woman’s skirts, but she followed me through the flat trying to hit my face with the acid. Then she fled.”

When Nicholas Cawfold and Mrs. Murphy went to a corner drug store to have their burns dressed Mrs. Hayden rushed in and risked if they were so badly burned they would be marked for life. Then she disappeared and the police have been hunting for her since. She has always been passionately jealous of her son-in-law’s attentions to other women than her daughter. 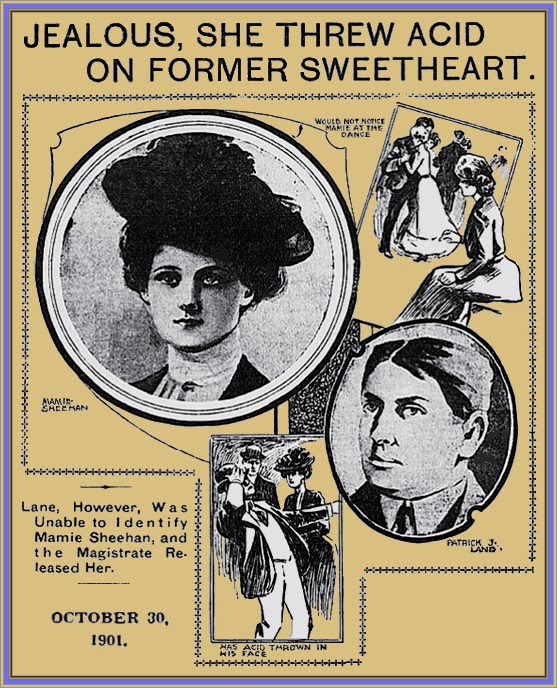 FULL TEXT: (Article 2 of 3): Mamie Sheehan, of No. 206 Baltic street, Brooklyn, and Patrick Lane, of No. 55 Van Brunt street, were at a dance last night in the Brooklyn Dancing Academy, in Fulton street, opposite the Borough Hall. They has formerly been sweethearts, but during the evening Lane did not dance with her. After midnight, when the dance broke up, Lane went out on the street and met the girl, who then threw acid in his face. Then she ran away.

The other girl was with Lane when the acid was thrown, and when the Sheehan girl ran away she followed. Opposite the Municipal Building she caught up to her, and there was a fierce struggle between the two, the blond girl yelling for the police all the while. Roundsman O’Brien heard her cries and placed Mamie Sheehan under arrest.

Meanwhile Lane’s friends wiped the acid from his face and took him to a near-by drug store At first he denied that he knew who threw the acid, and in a careless way asked those around him to have some soda water. He was firm in his denial about the girl when the roundsman brought her in. It was only after long persuasion that he agreed to make the complaint. His eye sight will probably be saved.

When taken to the police station the girl admitted her guilt.

“He threw me over for another girl,” she said, “so why should I not disfigure him? I do not remember throwing the acid, though. I seem to have been some other person.

“I am not sorry for what I did, and it is right that he should suffer as he made me suffer.

The girl, who is twenty-one years old and pretty, was arraigned in the Adams Street Court this morning, but for some hours Lane did not show up to make a complaint.

When Miss Sheehan was arraigned was arraigned in the Adams Street Police Court, Mr. Lane appeared as a witness. His face was badly burned and he was wearing smoked glasses.

Magistrate Steers asked if he could identify Miss Sheehan as his assailant. He said that he could not.

“There were twenty persons in the crowd,” he said, “and I do not know who threw the acid.”

“Do you think we should hold this girl longer?”

“Well, I she should be held until I can get witnesses.”

The policeman who had made the arrest said that he had no complaint to make, so the Magistrate dismissed Miss Sheehan, saying:

“I do not see why she was arrested.”

Before leaving the court-room Miss Sheehan, who is twenty-one, small, black-haired and pretty, admitted having thrown the acid, and said that she did it because she could not bear to see Lane with another girl.

Miss Sheehan left the court-room in company with her mother and sister. After consultation with his friends Lane returned to the police station and asked Magistrate Steers to issue a warrant for the arrest of Miss Sheehan. 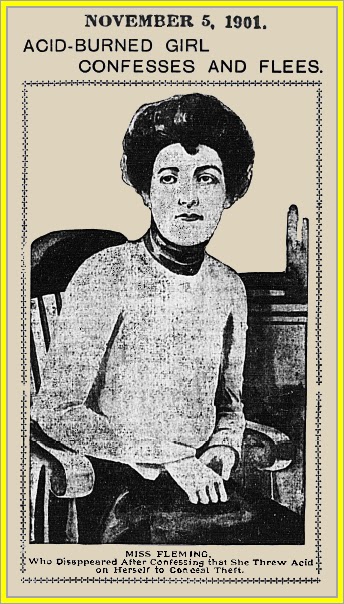 FULL TEXT (Article 3 of 3): After being foiled in an attempt to rob her aunt for the benefit, the police say, of her lover, and after disfiguring herself for life with carbolic acid in trying to bolster up a false story of robbery, pretty Amelia Fleming, of No. 642 Evergreen avenue, Williamsburg, has left her home for parts unknown after making a full confession of her duplicity to the police.

The girl is only twenty-one years old and very good looking and bright. She has worked as a governess for some good families in Brooklyn, but when she lost her last position, a few months ago, went to live with her aunt, Mrs. Louisa Siebel, at the address given.

Ten days ago Mrs. Siebel missed a dollar bill and found that somebody had ransacked her bureau. She questioned her niece, but the girl denied taking the money and suggested burglars.

Mrs. Siebel, however, feared for the safety of a roll of about $500 that she kept in her trunk, and put it in the bank without the girl’s knowledge.

Last Thursday Miss Fleming was found in the hallway of her aunt’s home by Hilda Schubert, a neighbor, badly burned with carbolic acid about the neck, face and hands, and apparently in an exhausted condition. She said a masked woman had entered the house and thrown the acid on her when she tried to prevent her from breaking open her aunt’s trunk. She said the woman had ransacked the place and stolen from her a gold watch, which had been a gift from her mother. She showed a mask which, she said,

The police concluded that the girl’s whole story is false and last night Sergt. Relfcucider, of the Ralph avenue station, went to the house with Detective Mitchell and received a full confession from the girl.

The girl said she had lost her watch and $15 dollars a week ago, and fearing to tell her aunt had thrown the acid on herself and feigned the assault of the masked woman. She admitted that she alone had ransacked her aunt’s rooms.

At Mrs. Siebel’s home this morning, an Evening World reporter was told that Miss Fleming had gone.

“Is that the man she is engaged to?” was asked.

“I don’t know anything about it,” said Mrs. Siebel. Then she said she did not know where her niece was and refused to give any further details of the queer story.