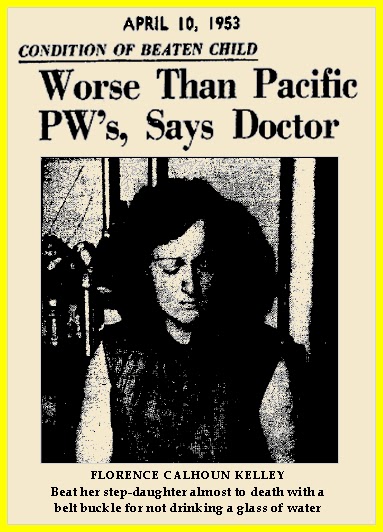 FULL TEXT: I tiptoed up to the little white bed in the Special Surgical Unit of the University of Texas Medical Branch Tuesday afternoon and saw a little girl whose head was swathed in bandages.

She wag 10-year-old Jewell Louise Kelley of Texas City, who Monday was beaten by her step-mother because she could not drink two glasses of water.

The slender child turned her head from side to side. Her eyelids blackened and swollen, it was hard to tell whether she slept or was awake.

But she was conscious for the first time since she was brought in Monday. She didn’t complain.

When she took from beneath the her arms out sheet – I got a glimpse of what a beating she got. Great big black and blue spots, bigger than the size of a silver dollar, covered her arms.

From her neck down there were dark ugly welts. The bruised spot overlapped each other. Her physician. Dr. Ira Jackson, aid she “might make it now that he had regained consciousness.

One of the doctors commented, “I was out in the Pacific during the war and I’ve seen prisoners come back after they’d gotten the works. Never did I see one that was in the condition in which that child is.”

That tells the story of Jewell Louisa’s plight at the hospital.

Then I went to the county jail where I saw the woman who inflicted the flogging with a leather belt at the end of which was a metal buckle.

Mrs. Frances Calhoun Kelley, the step-mother, was sullen. She didn’t want to see anybody. She had nothing to say. She wanted to be left alone.

The matron, Mrs. Catherine De Rulle, brought her from the cell in which she was confined away from the other women inmates.

“The women up here are up in arms what she she did to the little girl, so I put her apart from them so they won’t harm her,” the matron explained.

Wringing her hands, the woman said she couldn’t talk about what happened. Her eyes showed the lack of sleep.

I jus wanted to be sure those kids are all right,” she said, then wiped away a tear which streamed down her cheek. Her reddish blonde hair was disheveled and there was no make-up to hid the freckles on her face.

She told me she has been married previously and that she was working as a waitress in Texas when she married Kelley.

“What made you beat the child like that?” I asked.

She repeated she didn’t want to talk about it.

I reminded her she would be forced to talk about it when she is brought to trial.

“When the time comes I’ll talk about it – don’t you like the child – you don’t look like the type of person who would almost beat a little girl to death,” I said.

“I guess that’s my trouble. I’ve always been too good,” she said.

Then she walked away, down the corridor. She vanished from view as she entered her cell.

“Fran can rot in jail for all I care. I never want to see her again – I could never forgive her for what she did to my baby,” the father, Barney G. Kelley told me Thursday night.

He was there to see his “little Louise,” as she called the child.

“I don’t know what got into her,” he said more to himself than to me, as he sat on the steps of the special surgical ward at the hospital.

“She was strict with the kids. She beat them sometimes harder than I thought she should and I told her about it,” he went on.

“When we were going together before we married, she said she wanted the children. Never had any of her own.”

“At that time my first wife’s parents were taking care of them and they (the parents) were living with us.

“I thought Fran would make those kids a good mother – and they needed one badly, so we got married,” the father said.

“She was a good housekeeper

“I’d hardly been back at work a half hour, when Barney came on his bicycle to get me. He said that Mother had beaten Louise and she was hurt,” the father said.

On arriving home, the child was in their bedroom.

“Well, Barney,” he quoted her as saying, “I beat her and hurt her bad, but just let the kids get all right and I’ll leave.”

They took the child to County Memorial Hospital.

“I told my wife to take the car and go home. That’s the last I saw of her., and I hope I never see her again,” Kelley said.

“What I have seen my baby suffer here, I could never forgive Fran for.”

Then he went into the ward where his little girl lay.

He bent over her small bed and she clutched her hand tightly.

He put his arm under her pillow, hugged her, kissed her bruised face and said, “It’s all right. Daddy’s right here.”

Louise smiled. She stretched out her bruised arms and put them around her daddy.

Little Jewell Louise Kelley, 10-year-old Texas City girl who was badly beaten at her home Monday, was still on the critical list at John Sealy hospital Thursday night, but she had regained partial consciousness.”

“She might make it,” an attending physician said of the dark-haired girl whose beating law officers termed one of the worst they has investigated.

Meanwhile the stepmother, Mrs. Frances Kelley, 38, was in Galveston county jail under $10,000 bond on a charge of assault to murder.

Bond was set at a preliminary hearing in Justice of the Peace G. P. Redell’s court at 2 p.m. Thursday. Judge Redell continued the hearing until little Jewell is able to appear in court.

Jewell Louise, her nine-year-old sister, Sandra, and her brother, Barney Glenn, 12, were declared by the judge to be dependent and neglected children, and he granted an orfer giving the welfare custody.

The welfare unit, in turn, placed the children in the custody of the maternal grandparents. Mr. and Mrs. Walter Galloway of Texas City. They are the parents of the children’s mother, who died seven years ago.