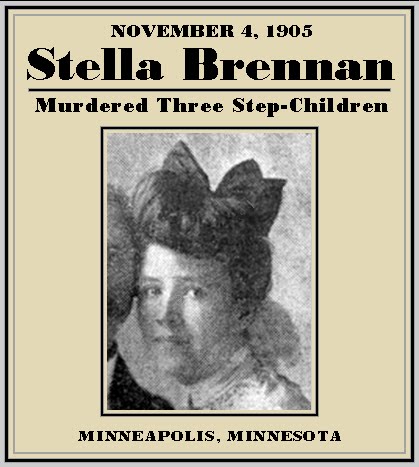 FULL TEXT (Article 1 of 5): Minneapolis, Minn., Nov. 6. – Three children are dead and one is badly wounded while the mother lies fatally injured at the city hospital as the result of a tragedy at the home of Jas. Brennan, a fireman. The dead:

Five shots were fired in quick succession. The first intimation of the tragedy was heard by W. G. Farmer, who lived on the first floor of the Brennan home.

The woman says says a stranger shot the children first through a window and then herself. The police think Mrs. Brennan did the shooting. The couple had separated, but recently became reconciled. She is step-mother of the children, and is believed to have become temporarily deranged because of jealousy of the children. The woman has tried suicide twice previously.

FULL TEXT (Article 2 of 5): Minneapolis, Jan. 1. – Guilty of murder in the second degree is the verdict whereby the jury holds Mrs. Stella Brennan of this city accountable for Elizabeth, and at the same time saves her from the hangman’s noose.

The indictment in the case charged murder in the first degree — the inevitable penalty for which is hanging – but the jury, as was considered provable, availed itself of the possibility of clemency provided, in Judge Dickinson’s charge and made its verdict murder in the second degree. The maximum penalty under this conviction is life imprisonment, and it is expected that will be the sentence of the court.

FULL TEXT (Article 3 of 5): Minneapolis, Jan. 2. – Mrs. Stella Brennan has begun the service of her life sentence in the Minnesota state penitentiary. This woman, convicted of the ointentional killing of her step-daughter, Elizabeth Brennan, has been sentenced to the penitentiary for the rest of the Hennepin county court.

In the custody of Sheriff Dreger, Jailer Nels Clausen and Jail Matron Mary Woodburn she left the Hennepin county jail shortly after noon and was properly installed in her permanent abode at Stillwater at a little after 2 in the afternoon.

The two indictments charging Mrs. Brennan with the murder of the other two little children were continued over the term, on motion of County Attorney Smith, and will be kept on the calendar until the defendant’s motion for a new trial has been decided or dropped.

FULL TEXT (Article 4 of 5): The application for parolee of Stella Brennan, sent to Stillwater in 1915 (sic, 1905 is the correct year) for the murder of her three step-children in this city, has been denied, it was announced yesterday by the state parole board. Her life sentence was commuted to 20 years a few years ago.

EXCERPT (Article 5 of 5): The board denied Stella Brennan, a pardon. She is the Minneapolis woman who killed her stepchildren and the board’s action was based largely on objection made by Thomas J. Brennan, the only surviving stepchild. He recovered from the shot wound inflicted by his stepmother. 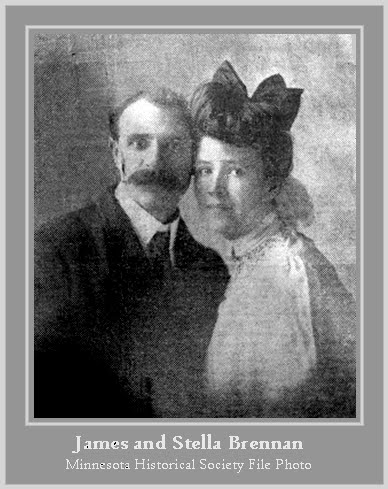 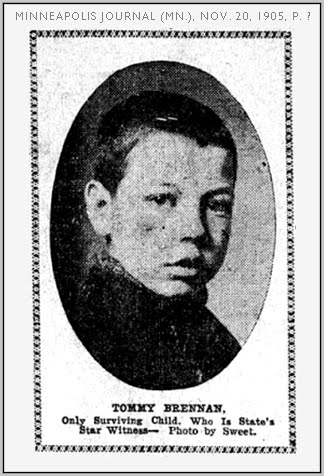 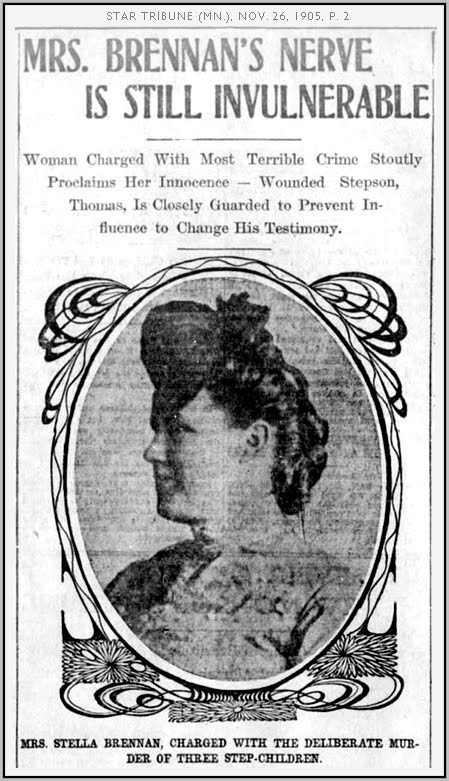 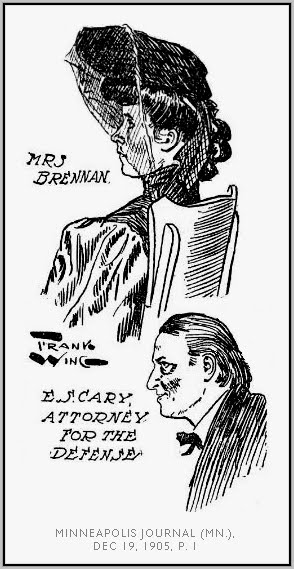 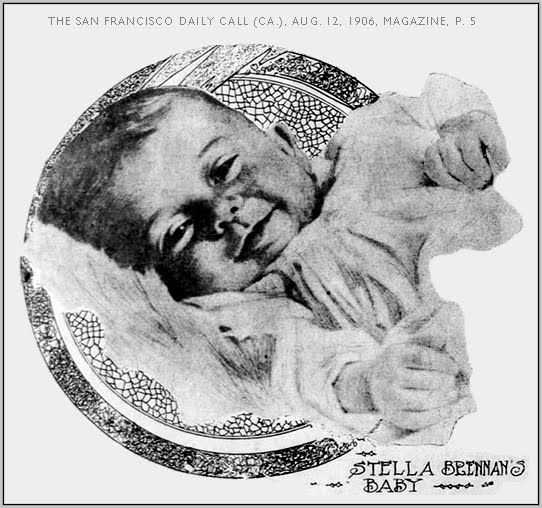 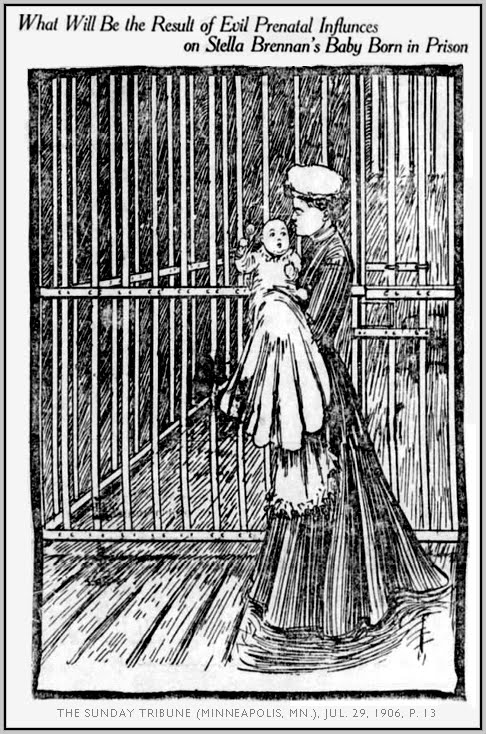 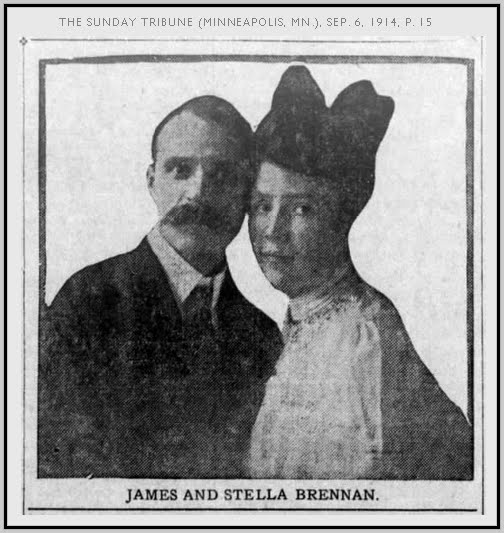 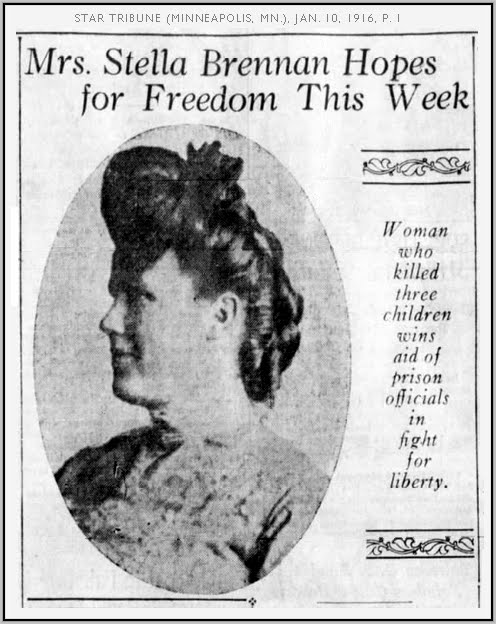