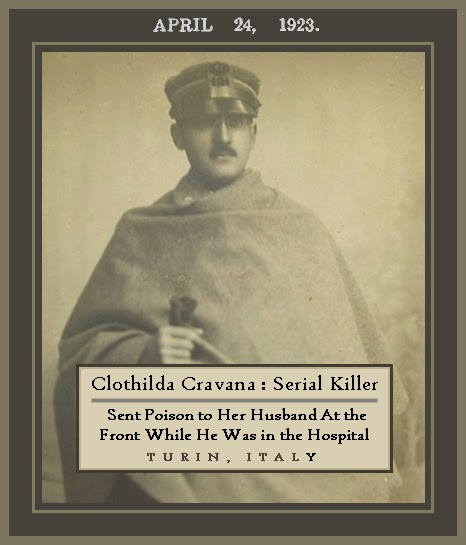 FULL TEXT (Article 1 of 2): London, April 23. – A message from Rome states that the trial of Clothida Cravana, who is charged with poisoning her son, daughter, and husband, is causing a sensation, partly owing to the beauty of the accused, who is a well-known woman in Turin.

Since her arrest she has lost three stone in weight, but she defended herself during the opening days of the trial with the utmost vigour. She declared that her accusers were acting under the impulse of a vendetta, and that her father-in-law, who is the principal witness for the Crown, had made immoral advances, which she had repulsed.

The trial is expected to last a fortnight. The evidence shows that the three victims died of poisoning by corrosive sublimate. When the first child died in March, 1916, the magistrate decided that there was no case for the jury. No official inquiry was held when the daughter died in similar circumstances in 1917, but the aged father-in-law, with unwearying persistence, induced the police to order post-mortem examinations and try the accused.

[A cable message from London on April l8 stated that Clothida Cravana had been accused of poisoning her son, daughter, and husband. The woman, it was stated, had frequently sent poison to her husband during the war, when be was in hospital at the front. Before her arrest she had been living a life of dissipation on 900,000 francs, inherited from her alleged victims.]

FULL TEXT (Article 2 of 2), Rome, May 26. –  Maria Clothida Gaione, nee Cravino, described by prosecution for crown as a modern Borgia, stands her trial at the assize court of Alessandria today on the capital charge of murdering her husband and two children.

The case has aroused extraordinary interest, not only because of the sensational charge itself, but, also because Maria Gaione is a beautiful woman about thirty years old, and one of the prominent personalities of the town of Ovada.

The allegations of the prosecution re briefly that Maria Cravino poisoned her husband, her son, and her daughter in order to give rein to her unbridled passions; that as a result of these murders she inherited 300,000 lire ($15,000); and that she proceeded to dissipate this sum with a series of lovers.

The case for the crown is that in February 1916 the Carabinieri (the Italian gendarmes) received an anonymous letter referring to the death In the previous January of Ernest, Maria Cravino’s ten-year-old son. The letter said that the boy had been killed by his mother.

On the strength of this letter an autopsy was ordered, criminal proceedings were initiated, and several witnesses were heard before the Juge d’Instruction of Novi Ligur. This brought the case to March 1918, when the examining magistrate decided there was no case to go before a jury.

In September of the same year Angela, the younger sister of the boy Ernest, also died, her symptoms being identical with those of her brother. Apparently this singular coincidence aroused no special comment. At all events, no official inquiry was ordered.

A little more than two years elapsed, and then. In January 1919, Giovanni Gaione, the husband, fell ill with the same sinister symptoms.

The doctors called in to visit him eventually diagnosed his case as one of poisoning by corrosive sublimate. On February 3, 1919, while the husband was still living, his father, Giovanni Battista, telegraphed to the King's Proctor of Novi Ligurs begging him to make inquiries.

A few lays later Maria Gaione's husband died. There was an autopsy, but death was ascribed to pulmonary pleurisy. The father-in-law, entirely dissatisfied with this finding, continued to press for a more searching inquiry, and in August 1919 Maria had again to face an examining magistrate. Once more it was decided that there was no case against her.

The old man, with unwavering persistence, still sought for fresh evidence, and eventually, on the strength of further testimony, induced the authorities to make an order for an exhaustive and highly technical post-mortem of the bodies of the husband and both children. The prosecution alleges that distinct traces of corrosive sublimate sufficient to cause death, were found in the bodies of both father and son, but it was impossible to determine the cause of the daughter's death.

A warrant was issued for the arrest of Maria Clotilda Gaione. Andino Carlo, alleged to be her lover, and her servant, Elina Minolli, were also arrested, but both the latter were discharged when the examining magistrate found that there was no case for trial on a charge of complicity.

Maria Gaione, since her arrest, has become a shadow of her former self, and has lost more than three stone in weight. Nevertheless, at the opening of the trial she defended herself with the utmost vigor, maintaining that one of her accusers was acting from a sense of vendetta only, as he had been her lover and she had afterwards discarded him.

[“Modern Borgia Up For Murder - Beautiful Italian Woman is Accused of Poisoning Husband and Children,” The Winnipeg Evening Tribune (Canada), May 26, 1923, p. 2] 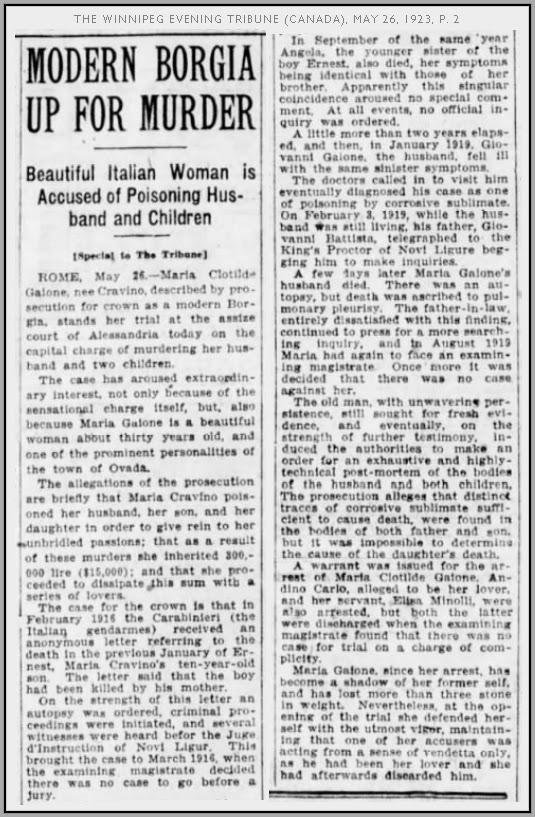