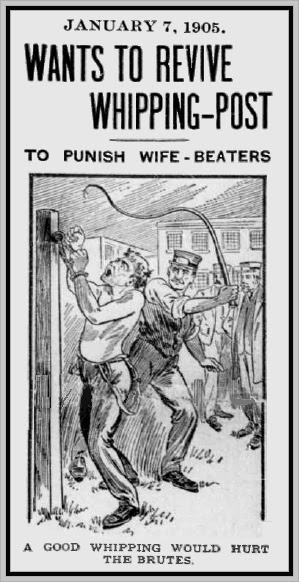 FULL TEXT: Bridgeport. – Selectman Augustine Martin Lewis, of the town of Southington, favors the whipping post for wife beaters. At a recent meeting of the managers of charity boards and selectmen, held in Hartford. Mr. Lewis advocated the advisability of having a whipping post bill introduced at the coming session of the general assembly. He said:

“If a bill is introduced I will not be the only one who will support it. From all over the state I have received assurances of support. Still, I meet a few persons who hold up their hands in horror and declare that to return to the whipping post would be going back to the days of barbarism. Then, too, there are politicians who admit that a whipping post would be a good thing, yet they fear it would cause trouble for the party passing the measure, and it would lose votes in consequence.

“A wife beater is too lazy to work for his family. When he is arrested and placed in prison he is comfortable. And gets three square meals a day. I have several times asked men arrested in Southington what would become of their families when they are in jail, and invariably their answer has been:

“What do I care for my family” I am of the opinion that a dose of the whipping post for such men would have a good effect, not only on the ones whipped, but on others who have a leaning toward wife beating and neglecting their families.

“I should be very conservative if I had the framing of a whipping post law. I have never advocated a whipping post for thieves and other criminals of that class, but something

“The whipping post should never be publicly administered. Let the judge of the court have all to say in regard that matter. The selectmen and charities board officials should give the judge the history of the offenders, so that he would know just what to do with them.”

[“Wants To Revive Whipping-Post - Southington, Conn., Selectman Wants New Law. - To Punish Wife-Beaters - He Says He Has Received Assurances of Support for Legislation He Will Ask For from Next Legislature.” The Richmond Planet (Va.), Jan. 7, 1905, p. 2]