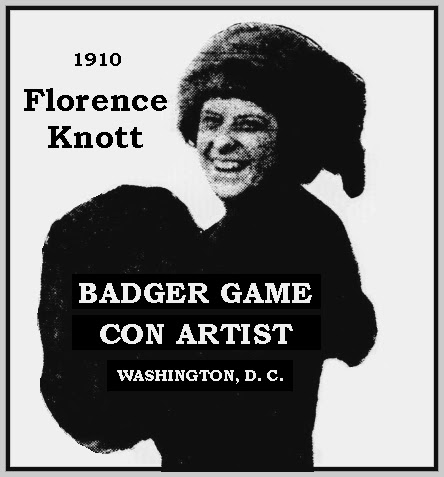 • Jams Knott declares Armstrong came to Washington on proceeds of similar game worked in Milwaukee with two other men and a girl as accomplice.

• Knott’s story of his and wife’s career in the Capital and circumstances surrounding elaborate scheme sustained by wife.

• Harry Rosenthal describes method by which alleged attest to obtain $5,000 from him by blackmailing scheme was worked.

Sensational disclosures said to have been made to the police describing the methods employed in an elaborate and ingenious scheme by which James G. Knott, Mrs. Knott, and Alfred H. Armstrong are charged with trying to obtain the implication of a fourth person. Benjamin H. Knott, and the swearing out of warrants for all four were this mornings development in the case.

The quartet was brought to police to headquarters this morning and photographed and  measured for the “gallery.” Tomorrow they will be arraigned in Police Court on charges of attempted blackmail.

Both James Knott and his wife, was formerly Florence Bennett are said by the police to have made disclosures this morning which throw new light on the perpetration of a highly original variation of the old “badger game.”

The most striking phase of Knott’s story told today Armstrong obtained $3,500 by working a game in Milwaukee similar to that attempted in this city. According to Knott two men and another girl were accomplices at that time.

The utter indifference of Knott, his wife and Armstrong baffled police upon early questionings. The trio apparently their sudden removal from their handsomely furnished apartment at the Cairo to a cell at First precinct station with perfect nonchalance, and to all appearances they were as indifferent to their fate. 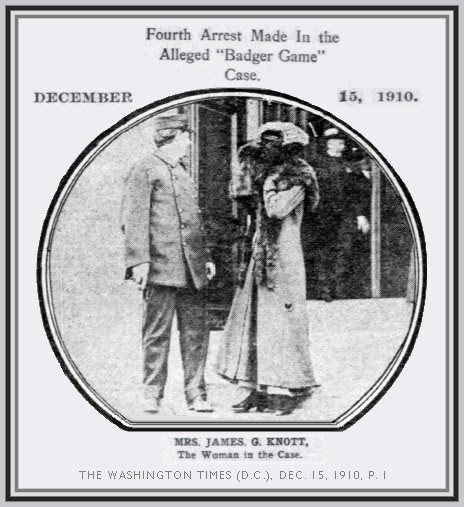 “That is the most cold-blooded crowd I ever saw was the comment of Inspector of Detectives Boardman.

Benjamin Knott protests his innocence of any connection with the plot to blackmail Rosenthal, who is a well-known sporting goods dealer, but the police say a letter found in his possession contained sufficient evidence on which to have a warrant sworn out.

According to Knott’s fragmentary story gained by the police today, James Knott first came to Washington about a year ago to live at 726 Fifth street northwest. Last September he and the Bennett girl, whom two months ago at Rockville joined the Virginia Amusement Company, and toured Virginia until the organization was stranded at South Boston, Va.

When Knott returned to his rooms on Fifth street be found his clothing gone and in place was left the uniforms of two marines supposed to be Flick King and E. M. King, who represented themselves as brothers. They are not supposed to have been related.

Knott told the police that Armstrong and two marines had worked the same in Milwaukee that they tried on Rosenthal here. They had for their accomplice Knott, another girl, and Armstrong came to Washington with his share of the proceeds

According to Knott’s story it was Armstrong’s glowing description of this scheme which inveigled him and his wife into a similar attempt. Mrs. Armstrong refused to talk except when she corroborated her husband’s version of Armstrong’s approaches.

Mrs. Knott came to Washington as Florence Bennett, according to her husband’s story,  with a former soldier. The pair rented a house near Fort Myer run until her companion’s money ran out and be replentished.

The usual method of an irate husband rushing into the room and demanding money from the “victim” was elaborated in such a manner that the alleged conspirators had a series of photographs with which they confronted Rosenthal when they made their demand for money. These photographs taken through hole in the wall by means of a powerful electric light, will be prima facie evidence, the assert, against the prisoners when they are arraigned in court. There are nine different pictures, the plates for which are locked up in the safe at Police Headquarters.

The story as Rosenthal told it to the police had its commencement several weeks ago when Mrs. Knott entered Rosenthal’s store to make several small purchases there and soon made it known to the merchant that she was rapidly falling in love with him

Although Rosenthal does tell the police that the girl – for she is little more than seventeen – made any real advances oh him, he claims that she sent him notes, some of which he still has, and invited him to cast upon her at her apartments in the Cairo apartment house.

The real entanglement began on Sunday fight when Rosenthal visited the Cairo for the first time did not stay very long on this occasion, he says because or an engagement watch he had in the morning and which demanded that he rise early. But the girl requested that he come back soon and he promised to return on the next night which he did.

Mrs. Knott so says had explained to him that she was very much afraid of the nark and thus trade an excuse for the brilliant lights which were suspended from the ceiling of her room in such manner that no portion of the apartment was in shadow when the lights were turned on says that he on this fact but that the woman turned it off lightly and that he did not think anything further of the lights or their significance.

On Tuesday morning Rosenthal mention the occurrence to his partner, Joseph Levy and was warned latter that there was probably something more than appeared on the surface, but Rosenthal, feeling secure at his and went to call on the fair charmer on Tuesday night.

It was late that night that the denouement came and when it did arrive it was with a suddenness that amazed and startled Rosenthal who was utterly unprepared for it According it was just before he was preparing to leave on Tuesday night that door of the closet in the girl’s room was suddenly thrown open and a later found to be James B. Knott of Richmond Va., who claimed to be the girl’s husband rushed out, brandishing a revolver.

With scarcely a word he grappled with Rosenthal threw him breathless into a chair and bound him there while the girl looked on in amusement. Then with a gun at his head Rosen that was told to write a check for $5,000 which he did but Knott would not accept it saying that he had to have the cash and Rosenthal to next morning.

Then with an additional warning of what would happen to him the money was not there Knott released the sporting goods merchant and the latter left the apartment only to meet Alton A. Armstrong, a friend of Knott’s who told that he had better have the money ready on the morrow for they had photographs showing Rosenthal that and the and he showed these to the merchant and said that they would be used against him. If the money was not forthcoming. It was found later that pictures were taken through a specially prepared hole in the closet door and the function of the lights was to facilitate the taking of the views.

When Knott called at Rosenthal’s store at 603 D street yesterday to collect the money from he found Detectives Cornwall and Bauer awaiting him and he was arrested after being caught in the act of trying to the money from the merchant. The made by the alleged blackmailers are in the hands of the police and will be used by them in the trial of Knott and his associates.

The authorities at the Cairo say the Knott pair conducted themselves with the utmost propriety while in the house and that was nothing to indicate that they were not what they pretended to be – a respectable, a newly married couple plenty of money.

According to the story told to the by Knott Armstrong and the girl after they were is thought that the trio has a police record other cities and the police think this is not the first time that have been mixed up in a game of kind.

While the credit of successfully carrying out the scheme belongs properly to Knott and his young wife. It is the opinion of the police that the brain behind the entire scheme the judgment which directed the operations of game and the genius which man aged the details of the taking of the pictures and other important developments, belong to Armstrong.

So far as can be learned Armstrong is much older than the age which he gave at headquarters yesterday – twenty years. He tells, with a bit of pride, of having a house in Richmond, Va., and of having held up a gambling in Chicago at the point of a gun. And, as one member of the force said this morning, “any man who holds up a card joint in Chicago and gets away with it, going some.”

Armstrong says that his Chicago achievement netted him about $1,000. which was enough to finance him for his and masterly work. In Washington Knott says that he met Armstrong at the Bliss Electrical School, in this city, where they were both pupils and, that, after a brief but intimate acquaintance, Armstrong broached his scheme of getting a little easy money by variation of the old and oftworked badger game.

Armstrong, according to Knott’s story outlined the plot in brief and said that the best one that they could possibly pick for the woman’s end of the game would be Knott’s young wife, and that Armstrong was continually telling him that should not be plodding along in the world with a mere pittance when they could pick up a lot of easy money by the use of a little ingenuity.

Knott says that he met his wife six months ago and they were married in Rockville, Md., on November 25 find engaged apartments at the Cairo a few days after. On searching Armstrong’s rooms and trunks a number of cameras and plates were discovered. He claims, as does Knott, that he has been living on money sent to him by his mother in Orangeburg, Va., but police say that he has made other statements concerning the source of his income.

Rosenthal tells the police that he had requested hostess several times to turn off the mercury light which was suspended from the ceiling in her room, but that she made the excuse that the dark frightened her. So the light remained on and the pictures taken of the pair are consequently as clear and well defined as taken in broad daylight.

The police spay that they have found the hole in the door through which the pictures were taken, the weapon with which Rosenthal was threatened, and several other bits of damaging evidence against Knott, Armstrong, et al., but they will not say what these last bits of evidence are. There is no doubt however, in the minds of the police authorities that in the capture the trio thy have bagged one or the boldest and most dangerous sets of blackmailers that have ever been taken or even reported here

Knott was arrested late yesterday afternoon just as he was demanding the payment of the $2,000 promised by Rosenthal. Armstrong was taken at the a Cairo, as also Benjamin H. Knott, brother of James Knott who is held on suspicion, and Mrs. Knott was taken into custody just as she was about to step on board a train at Takoma D. C., where she was to have met her husband. It is not thought that there are any other members in the gang.

[“Disclosures Made By Trio Accused of Blackmailing – Fourth Arrest In The Alleged ‘Badger Game’ Case. – Are Disappointed But Indifferent - Variations of Old ‘Frame Up’ Used In Attempt to Blackmail Harry Rosenthal.” The Washington Times (D.C.), Dec. 15, 1910, p. 1] 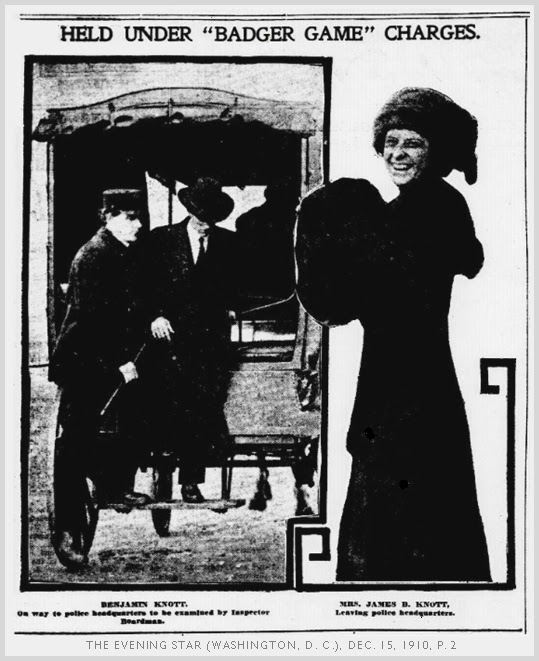 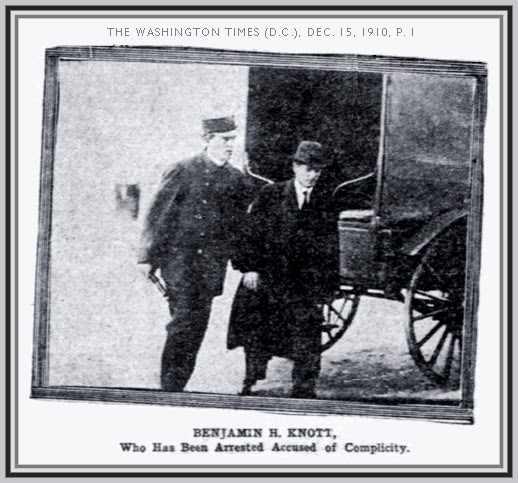 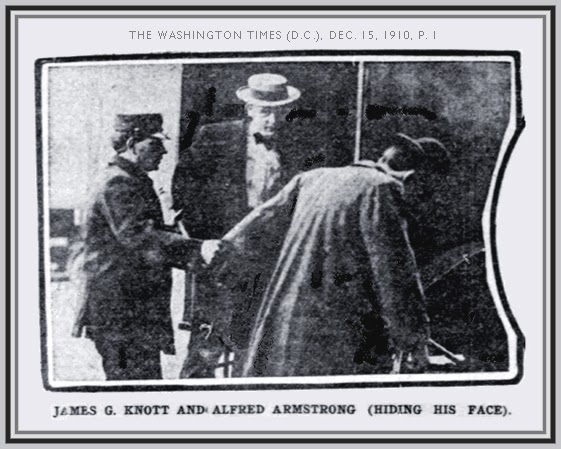