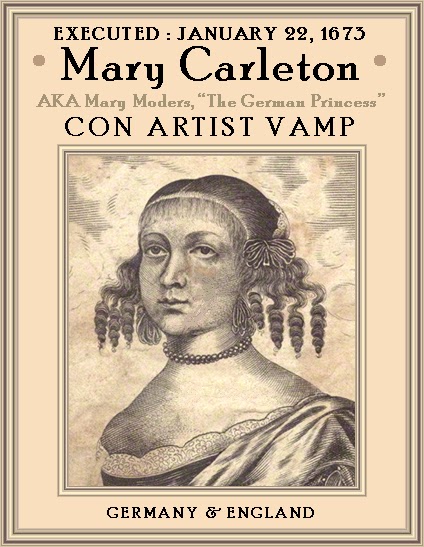 Wikipedia: Mary Carleton (11 January 1642 – 22 January 1673) was an Englishwoman who used false identities, such as a German princess, to marry and defraud a number of men. Carleton was born Mary Moders in Canterbury. According to later accounts she married a journeyman shoemaker named Thomas Stedman and gave birth to two children who died in infancy. She later left her husband to move to Dover where she married a surgeon, prompting her arrest and trial in Maidstone for bigamy.

After the trial she visited Cologne where she had a brief affair with a local nobleman. He gave her valuable presents, pressed her for marriage and began the preparations for a wedding. She, however, slipped out of Germany with all the presents and most of her landlady's money, returning to England through the Netherlands.

She returned to London in 1663 and took on the persona of an orphaned Princess van Wolway from Cologne. She claimed that she was born in Cologne and that her father was Henry van Wolway, Lord of Holmstein and that she had fled a possessive lover. She used this guise to marry John Carleton, brother-in-law of the landlord of the Exchange tavern which she frequented. After the wedding, however, an anonymous letter exposed her.

Her trial in 1663 was the first recorded appearance of Mary Carleton. She was charged for masquerading as a German princess and marrying John Carleton in London under that name. She claimed that John Carleton himself had claimed to be a lord and was trying to extract himself from marriage as he had discovered there was no money in it. Divorce would have been an unheard of scandal in those times. Both sides of the conflict published pamphlets to support their own story. Mary Carleton was eventually acquitted.

Afterwards Mary Carleton wrote her own account, The Case of Madam Mary Carleton, possibly through a ghostwriter. She also acted in a play about her life and gained a number of admirers who gave her more valuable gifts. She eventually married one of her admirers. Predictably she left him too, taking with her his money, valuables and keys while he was drunk.

Carleton next pretended to be a rich virgin heiress fleeing an undesirable suitor whom her father had arranged for her. She even arranged that someone would send her letters that supposedly contained updates of family news. When her new landlady found and read them, she was convinced and became a matchmaker between Carleton and her nephew.

Carleton arranged a new letter that claimed that her brother was dead and he had left her all he had, including her father's forthcoming inheritance. However, her father was even more determined to marry her to a suitor she detested. Her lover invited her to live with him but Carleton and an accomplice, disguised as a maid, stole his money.

Over the following ten years Carleton used similar methods to defraud various other men and landlords, often with the aid of her maid. Some of the men were too embarrassed to reveal they had been duped. She was many times accused of theft but was jailed only briefly.

She was once arrested after stealing a silver tankard, and was sentenced to penal transportation and sent to Jamaica. However, after two years she returned to London, again pretending to be a rich heiress and married an apothecary at Westminster. Naturally, she stole his money and left him.

In December 1672 Carleton was captured when a man who was searching for stolen loot recognized her. On 16 January 1673 she was tried in the Old Bailey. Because she had returned from penal transportation without permission, she received a sentence of death. She was executed by hanging on 22 January.

In 1673 Francis Kirkman wrote, and issued under his own name, The Counterfeit Lady Unveiled, a fictional autobiography.

Leaving the stage, Moders concentrated on crime, creating one man after another, sometimes employing a swindle that would later be termed “the badger game.” She would entice a wealthy man to her apartment, then have an accomplice pretending to be her husband barge into the room, raging that he would kill them both. Invariably, the compromised suitor paid handsomely to be spared his life. [Jay Robert Nash, The Great Pictorial History of World Crime, Volume 2, Scarecrow Press, 2004, p. 363] 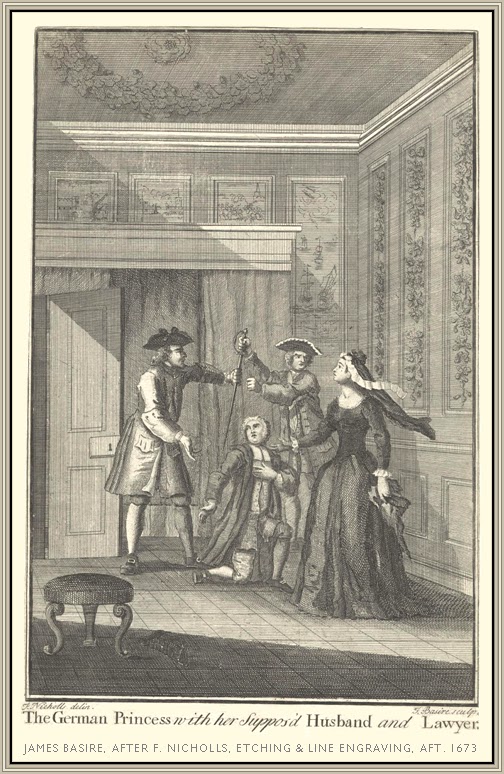 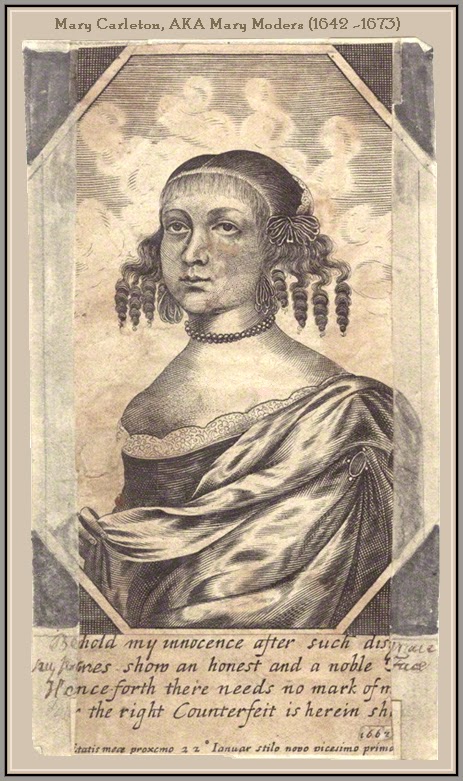