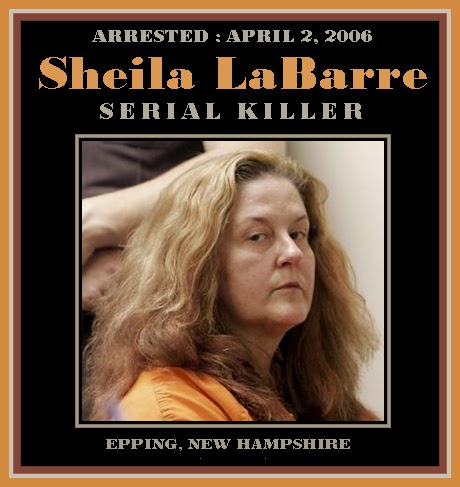 Sheila LaBarre (born Sheila Kay Baley on July 4, 1958 in Fort Payne, Alabama) is an American convicted murderer. She was sentenced to two consecutive life sentences, with no prospect of parole after being convicted of killing two men, Kenneth Countie and Michael DeLoge, in Epping, New Hampshire. At the time of the crimes, LaBarre lived in Epping, New Hampshire (Rockingham County) on a farm. She regularly enticed younger men to her farm, where she would torture and control them. At her trial she claimed she was an angel, sent by God to punish pedophiles. She accused the two men she killed of being pedophiles.

LaBarre was born Sheila Kaye Bailey in Alabama in 1958. She has a sister, Lynn Noojin. She graduated from Fort Payne High School in 1976. After marrying Ronnie Jennings, she was known as Sheila Bailey Jennings. She wanted to divorce Ronnie but he refused to divorce her for some time. In the early 1980s, LaBarre was held in a psychiatric facility after attempting suicide where she was sexually assaulted by an orderly. She married John Baxter in January 1981.

LaBarre moved from Fort Payne to Epping, New Hampshire in 1987 after answering a personal ad placed by Dr. Wilfred “Bill” LaBarre, a chiropractor. She never legally married Bill LaBarre, but took his last name (“Sheila LaBarre”) and they lived together from 1987 until his death at age 74 in 2000. Bill LaBarre had been married twice before. However, LaBarre married a Jamaican citizen named Wayne Ennis in Yor, Maine, on August 22, 1995. LaBarre divorced Ennis in 1996. In April 1997, Sheila LaBarre got a restraining order against Ennis after he had repeatedly assaulted her.

After Bill’s death, Sheila LaBarre inherited his farm. She said she was his common-law wife. His children from a previous relationship attempted to contest the will to get money and property, but were informed they had a 50/50 chance of success and would have to pay $50,000 upfront. 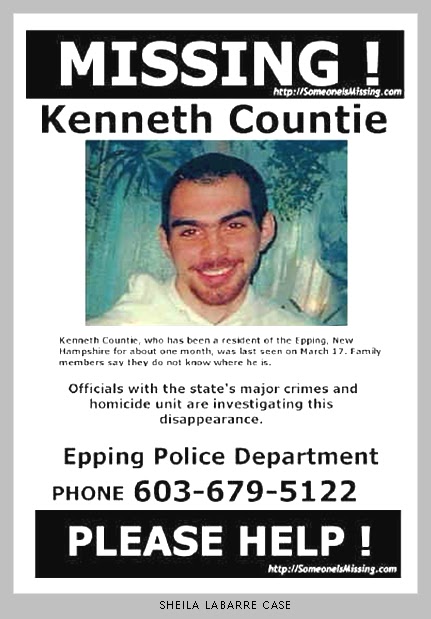 Kenny Countie met LaBarre via a personal ad in 2006 when he was 24. He moved in with her shortly after meeting her. Countie was described as having a low IQ and “child like” trust. LaBarre made a recording of him vomiting whilst she accused him of being a paedophile. She stabbed him to death and then burnt his body. The police were able to identify his DNA from his army records.

Countie’s mother subsequently accused the Epping Police Department of negligence. Prior to his death, he had been seen in a Walmart store, bruised and burned, in a wheelchair. Her lawsuit against the two police officers who had seen him in the store was rejected in 2010.

Deloge was LaBarre’s boyfriend, who lived with her at her farm. He was last seen alive in 2005. A bone of his and his birth certificate were found at the farm in 2008. It is unknown how he died. His mother informed the police that she was worried LaBarre was trying to kill him.

An arrest warrant was issued on April 1, 2006 for Shelia LaBarre, for charges of first degree murder. She was arrested on April 2, and the police conducted a three-week search of her farm.

The jury visited LaBarre’s farm and the Walmart where she was seen with Countie. LaBarre attended too, wearing a stun belt. LaBarre pleaded not guilty to murdering Countie and Deloge on the grounds of insanity. Her defense attorney described her as a “deeply, deeply sick individual.” At trial in May 2008, psychiatrists testified that LaBarre was diagnosed with schizoaffective disorder and delusional disorder. James Brackett testified in court that he was in abusive relationship with LaBarre for six years. LaBarre’s ex-husband Wayne Ennis claimed that she had asked him to kill Wilfred. Wilfred LaBarre’s daughter Laura Melisi claimed that LaBarre had threatened to shoot people. She stated she always disliked Sheila LaBarre, and had warned her father against pursuing a relationship.

Her plea of not guilty by reason of insanity was rejected by the jury. They found her guilty and LaBarre was sentenced to life in prison without parole in June 2008. Her appeal in 2010, was rejected. LaBarre is currently serving her sentence in Lowell Annex near Ocala, Florida.

• Suspicions on death of Dr. Wilfred LaBarre [not in Wikipedia]

• Unnamed victim [not in Wikipedia]

A woman who is in prison for torturing and killing two boyfriends may have a new body to account for as police have found three toes near her farm that do not belong to the two men she is known to have murdered. Sheila LaBarre, now 54, was arrested in 2006 after an anonymous tip led police to find remains of Kenneth Countie and Michael Deloge near her Epping, New Hampshire home. With the latest discovery, police are asking for the public's help in trying to piece together who the toes may belong to. 'They were not the remains of Kenneth Countie or Michael Deloge,' Assistant Attorney General Jane Young told The Manchester Union Leader. “There was no way to determine who it was.” [Meghan Keneally, “How many did she kill? Police believe woman who murdered two of her boyfriends may have another victim after finding toes at farmhouse,” Mail Online, Jul. 5, 2012]

[The above text is taken from the Wikipedia article on this case and augmented from other sources.] 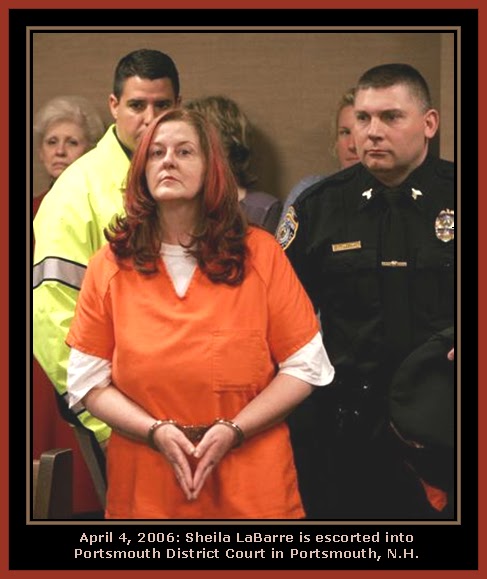 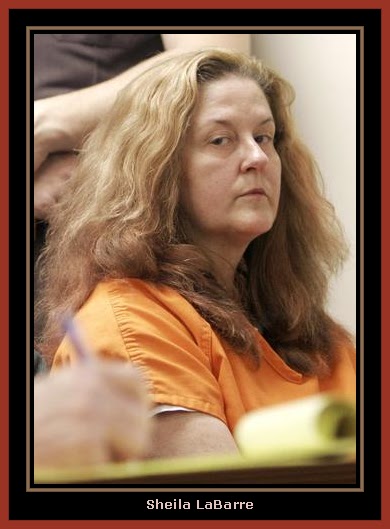 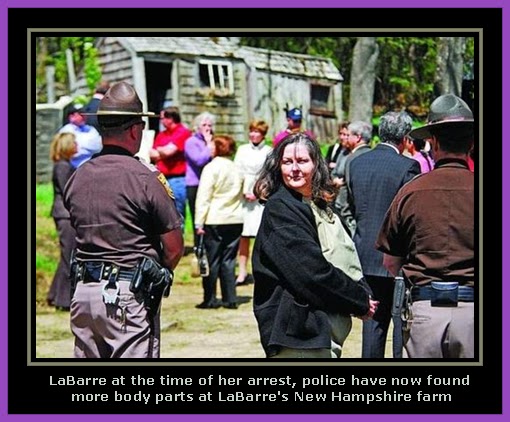 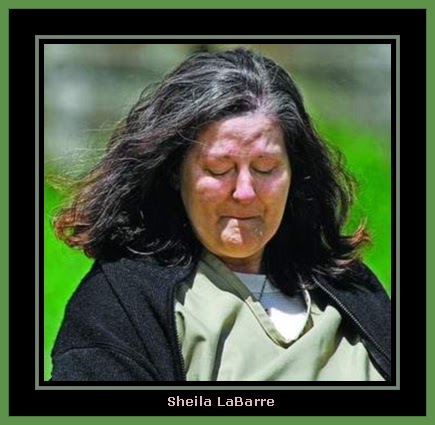 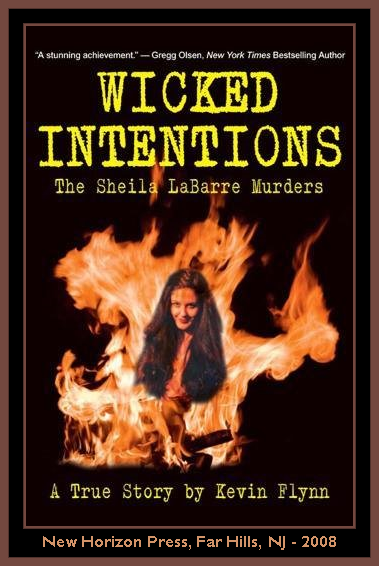