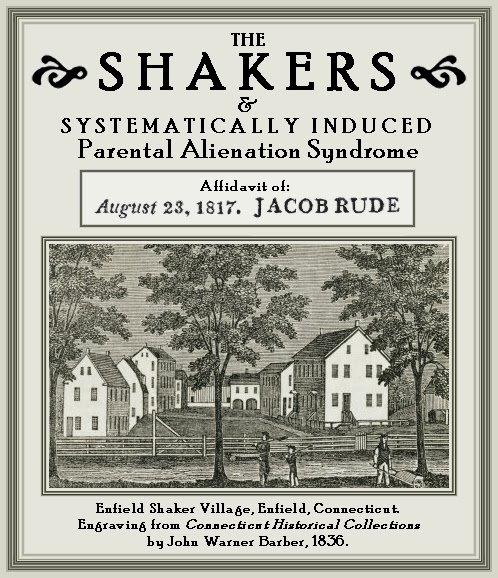 NOTE: The following text describes one of the means by which the Shakers cult, founded in New York state in the late 1700s,  indoctrinated children – usually with the assent of at least one parent – into accepting that parent-child relations are wicked and that children must hate their parents, and instead accept the cult leaders as “parents.”

The Shakers mind control techniques and panopticon surveillance methods were an inspiration to Fredrick Engels, co-author of the Communist Manifesto.
Early in October 1844, Engels had written to his friend Marx in Paris that ..... “The first people in America,” he wrote, “and indeed in the world who brought into realization a society founded on the community of property were the so-called Shakers. [Ref. Feuer, Lewis S., “The Influence of the American Communist Colonies on Engels and Marx,” The Western Political Quarterly, Vol. 19, No. 3. (Sep., 1966), pp. 456-474.]

JACOB RUDE, aged 19 years, being duly sworn, saith, that in the year 1815, he went with his mother to the society of Shakers; that he with 7 other young persons attended an evening school in the winter of 1815 and 1816, that one evening after they had gone through the exercises of the school, John Woods, who taught the school, rose up & taught them, saying that they must hate their parents: and if their parent spoke to them, they must not answer them; or if they did, they must answer them in a scornful sneering manner, frown and look surly at them, &c. And then put the question to them in general, whether this was not their faith; they all answered Yea, except this deponent, who was silent – which Woods perceived, and immediately put the question to each one separately, beginning at this deponent, who stood first in the class, & who though conscious of the error, through fear, answered in the affirmative. – And, that Woods repeatedly endeavored to instill such principles into their minds.

[Rude, Jacob, Affidavit of Aug. 23, 1817, from: Eunice Chapman, “An Account of the Conduct of the Shakers …,” 1818, p. 94 ( This is the first of two books published by Eunice Chapman recounting the Parental Kidnapping of her children by her husband who had joined the Shakers.)]

Following is the text of the song Shakers used in the 1820s and possibly earlier to indoctrinate children in the hatred of family relations.

Except a man hate his own life,
And all his sins forsake;
Hate father, mother, children wife,
Of Christ he can’t partake;
Oh the way, the narrow way, &c.

Note: in Shaker parlance, “Christ,” refers not to Jesus, but to “Mother Ann Lee”