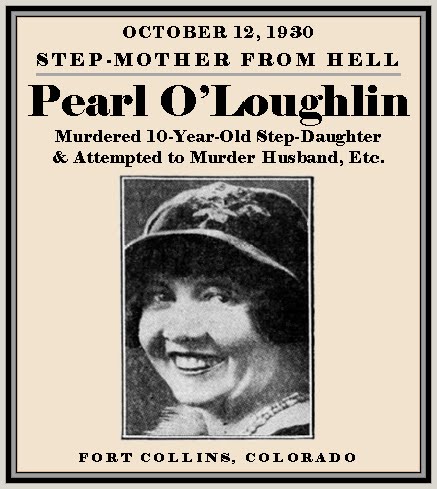 FULL TEXT (Article 1 of 3): Denver, Colo., Oct. 21. – Officers investigating the brutal murder of 10-year-old Leona O’Loughlin, drowned in City Park Lake, apparently have unearthed evidence of an attempt to exterminate other members of her family.

While officers continued to question Mrs. Leo O’Loughlin, stepmother of the child who was fed ground glass, beaten, unconscious and thrown in a lake to drown, Leona’s 74-year-old grandfather, Dennis O’Loughlin, made his appearance in the investigation.

He told officers he had found glass in the sugar served at a dinner at his home in Fort Collins, Colo., six weeks ago. Leo O’Loughlin, father of the slain girl, is now recovering from the effect of eating ground class.

Investigators said it was established the glass in the sugar bowl at the Fort Collins dinner and that found in the slain girl and her father was identical.

Repeated questioning of the stepmother resulted in her constant denials of any part in the death of the girl.

Under the law police will have until 10 a. m. Friday to produce her in court for a hearing on the writ.

[“Woman Denies Part In Ground Glass Crime - Investigations Into Murder Of Her Step-Daughter Unearth Evidence Of Attempt To Exterminate Other Members Of Her Family.” Cumberland Evening Times (Md.), Oct. 21, 1930, p. 1] 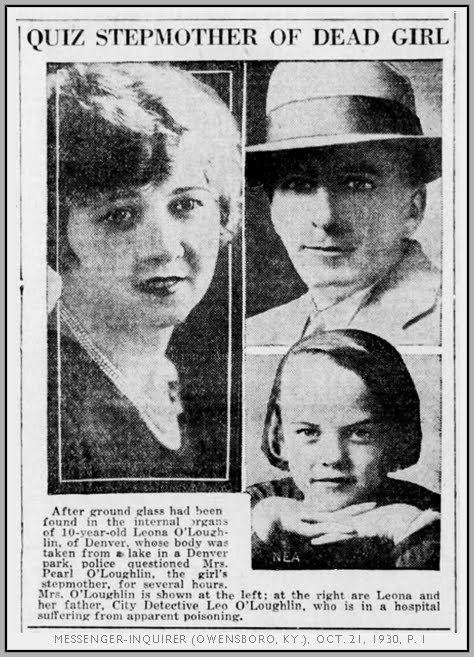 Note: Some sources misspell the name as "O'Laughlin."

With Mrs. O’Laughlin’s alleged confession to police barred as evidence, the verdict carried with it an automatic penalty. Under Colorado law capital punishment can be imposed only where there is an eye-witness to the crime or a confession by the accused. Laughing and joking with her attorney a moment before the jury filed into the box, Mrs. O’Laughlin listened intently but with no display of emotion as Judge Henry A. Calvert read the verdict.

The defense was granted thirty days in which to file a motion for a new trial. Should the motion be denied, John M. Keating, her counsel, said he will appeal to the state supreme court.

The formlities over, Mrs. O’Laughlin stood erect and walked with firm step from her chair down a narrow passageway to the prisoner’s dock. In the front row of the spectator’s seat sat the woman’s husband, Leo, a city detective whose life the state alleged she also sought. The husband flinched as the verdict was read.

In the closing argument, Earl Wettengel, district attorney, and Ralph J. Cummings, the prosecutors, endeavored to show Mrs. O’Laughlin, could not account for her movements the night of October 14, when her step-daughter, Leona was apparently hit on the head with a tire iron and her body thrown into the icy waters of Berkley lake.

The opportunity for the crime, Wettengel argued, rested between Mrs. O’Laughlin, her husband and his brother, Frank, who also is charged with the murder. His trial is set for Dec. 16. The husband was at work on a. robbery investigation.

Frank, on the witness stand, testified he spent the night in bed, and his statements were not refuted. The prosecution emphasized the alleged finding of glass in the stomachs of Leona and her father. As a motive for murder the state sought to show Mrs.

O’Laughlin attempted to kill her 73-year-old father, Dennis, by putting glass in a sugar bowl at his home in Fort Collins; to end the lives of her husband and stepdaughter by placing glass particles in their food, and then to inherit the elder man’s estate of approximately $35,000 and $3,200 in insurance carried by her husband. 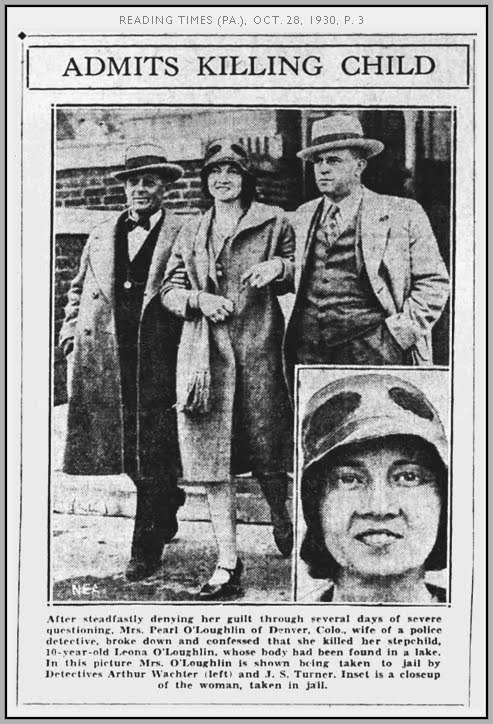 Mrs. O’Loughlin was found guilty last night of slaying her stepdaughter, Leona, 10, whose battered body was found in Berkeley Park Lake, Oct. 17. The “child had been fed broken glass, struck on the head with a tire iron and her body hurled into the lake, the state charged.

The tall, red-haired, woman who stood off police questioners for five days without breaking down, showed no emotion when the jury’s verdict was read.

District Attorney Earl Wettengel said he was confident the jury would have voted to hang Mrs. O’Loughlin if he had been permitted to introduce statements he said she made of Detective A. T. Clark in which she said: “I did it,” “and “I alone am to blame.”

The statements, he said, constituted a confession, which is necessary under Colorado law to sustain a verdict imposing the death, penalty unless there are eye-witnesses to the crime.

There were no eye witnesses to Laona’s murder, and the confession was kept from the jury when the defense proved it was obtained under duress. Colorado law excludes, confessions obtained either under duress or under promise of reward of immunity.

With Mrs. O’Loughlin’s confession ruled out, Judge Henley A. Galvert instructed the jury it could return one of two verdicts, acquittal or guilty with life imprisonment as the penalty.

Chief Defense Counsel John M. Keating announced today that if he failed to get a new trial he will appeal Mrs. O’Loughlin’s conviction to the state supreme court as soon as she is sentenced.

“She got what she deserved,” said the woman’s husband, Leo O’Loughlin, a city detective, who was ill when Leona was killed and who physicians said also ate some of the broken glass which contributed to Leona’s death.

Mrs. O’Loughlin walked to her cell without assistance after the verdict, removed her clothing, donned a pink wrap and combed her hair.

Mrs. Jennie Ray, jail matron, said she bore up under the weight of her conviction better than any prisoner she had ever seen.

“She is a remarkable woman,” said Mrs. Ray. “Her nerve truly must be iron.” 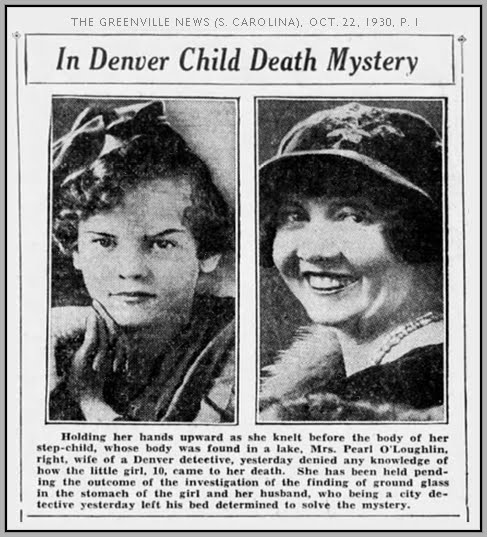 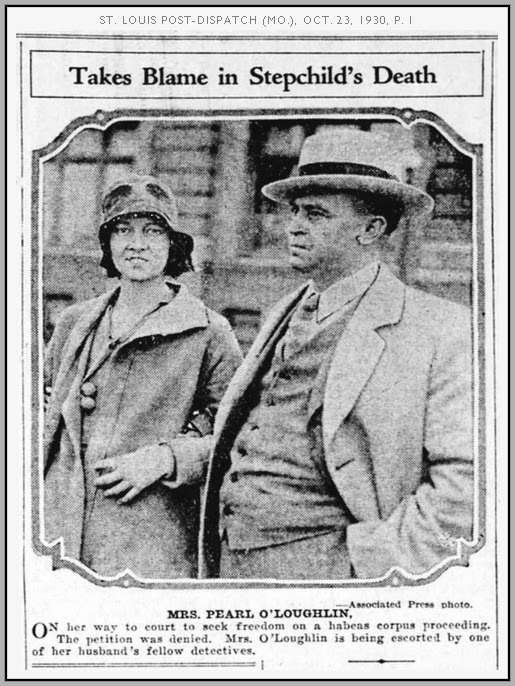 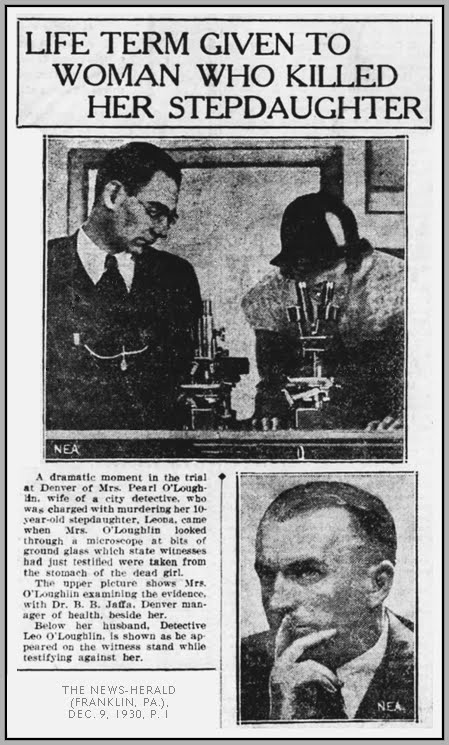 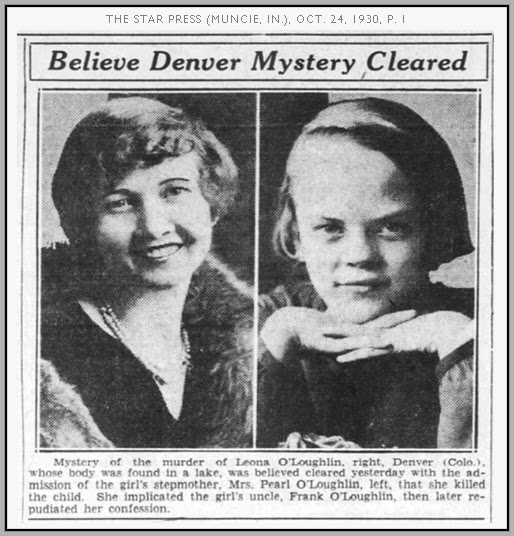 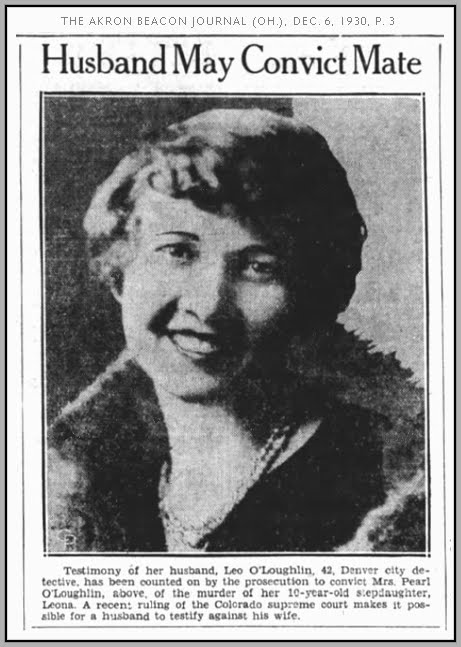 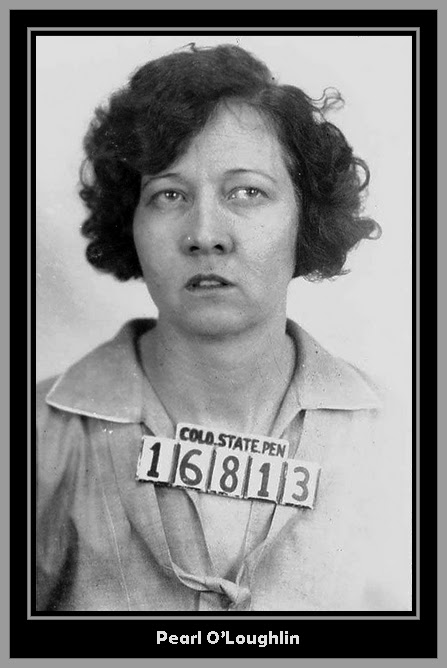 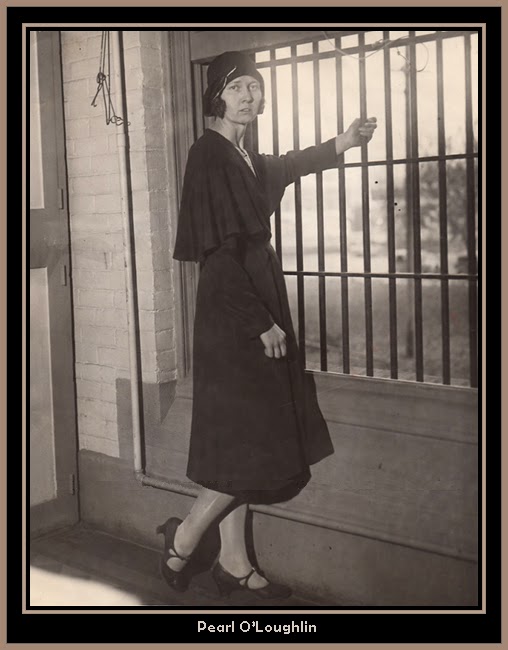 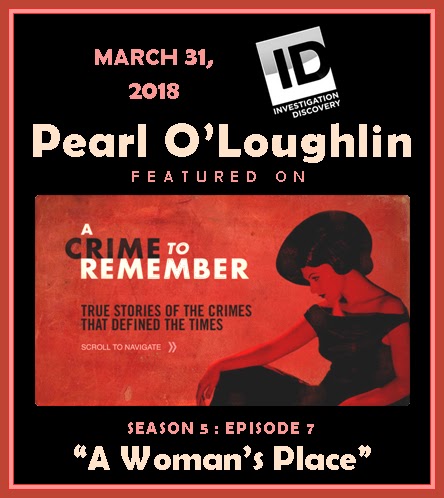 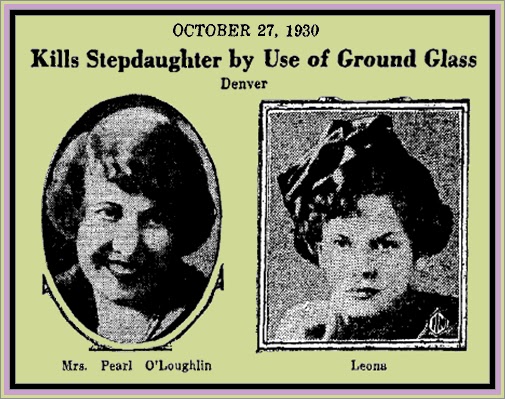