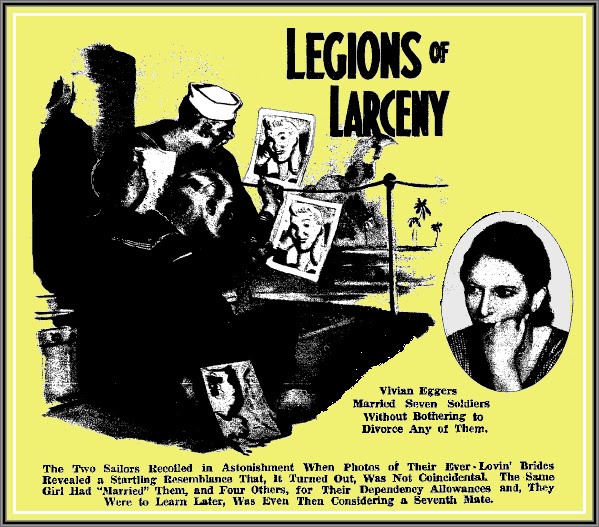 ILLUSTRATION CAPTION: The Two Sailors Recoiled in Astonishment When Photos at Their Ever-Lovin’ Brides Revealed a Startling Resemblance That, It Turned Out, Was Not Coincidental. The Same Girl Had “Married” Them, and Four Others, for Their Dependency Allowances and, They Were to Learn Later, Was Even Then Considering a Seventh Slate.

PHOTO CAPTION: True to the Army, Vivian Eggers, Cincinnati FBI Agents Said, Married Seven Soldiers Without Bothering to Divorce Any of Them.

FULL TEXT: It is axiomatic that a sailor has a sweetheart in every port, but Elvira Tayloe put reverse English on the idea. She had a sailor in every porthole. Well, maybe not that many, but Elvira did manage to accumulate an even half-dozen seagoing husbands in less than a year. And she collected dependency allotments on all six.

Elvira’s technique was perfect. She worked as a dime-a-dance,, girl at one of Norfolk’s hot spots; hence met plenty of lonely service men. The blond temptress preferred the Navy (she said soldiers propositioned; never proposed). Anyhow, whatever the reason, she succeeded in wedding six sailors the day before each left for the South Pacific. She was hard at work on her seventh when her marrying career was brought to a sudden end by the kind of coincidence which should happen only in a movie.

Two of her lovin’ spouses met in Australia, compare photographs, and decided they’d been gypped, A complaint to the legal advisory bureau of the Navy Department saved the sailors $22 a month each and put Elvira in jail. She was convicted, not of defrauding the government, but of bigamy. 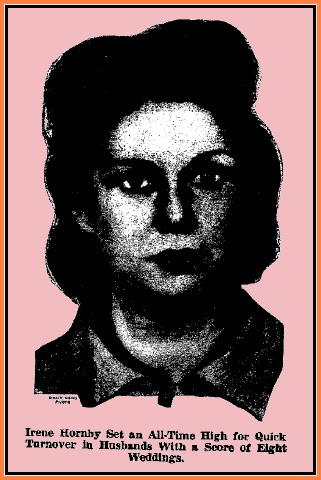 Two similar cases of multiple marriages have developed, but in only one was a money allotment involved. In Montreal, Irene Hornby, convicted of bigamy recently for having married four men, was sentenced to four years in prison. At least three other marriages are attributed to her. She was not accused of money affairs.

In Phoenix, Ariz., Vivian Eggers, 34, was sentenced to 18 months for accepting a soldier’s allotment while not the man’s legal wife. She was arrested in Ohio where authorities quoted her as saying she had married seven service men, none of whom she had divorced.

Officials of the American Bar Association declare tens of thousands of service men are bled for tremendous sums for dependency allotments by undeserving wives. The government is cheated of an even greater amount. Naturally the War and Navy Departments are doing all they can to put a stop to the racket. Hastily-married, or long-estranged, wives are investigated thoroughly before a dependency allotment is granted.

Which doesn’t mean that soldiers and sailors are safe from swindles based on sex. In New York City alone, a horde of twentieth century vampires subsists entirely on what they can chisel from service men.

Many of these “Victory Girls” are out for what money they can take from service men, but others aim for higher stakes. Moth-eaten deceptions have been brought up-to-date and are practiced on the military personnel constantly.

Some of the third-rate hotels in the Times Square area co-operate with, these sharp-shooting damsels. Fifteen minutes after a couple, sans baggage, has checked in, there is a knock on the door. A beefy individual, with all the earmarks of a typical cop, crowds into the room.

“I’m from Headquarters,” he announces ominously, flashing a shiny badge just long enough for the beholder to make out the one word, “Police.” The intruder ignores the soldier; speaks to the woman:

“We’ve got orders to pick up all the girls working this district. So you’re coming with me.” To the man, the pseudo detective adds: “You get going. If you weren’t in the Army, I’d run you in, too.”

The girl bursts into tears. “Don’t leave me,” she pleads, throwing her arms around the soldier. “Don’t run out on me like that. Please help me.” 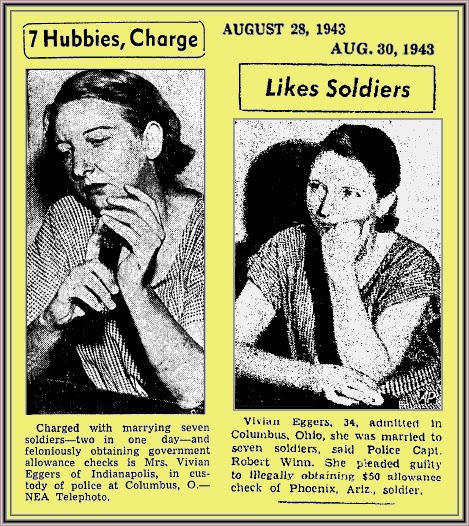 THE bewildered victim is anxious to get away as soon as possible. Yet he doesn’t want to appear like a rat deserting a sinking ship.

Then the trap is sprung.

“All these dicks take graft,” she whispers into his ear. “Ask him to step out in the corridor, and offer him some money.”

The sucker, who has never heard of the badger game, often agrees. He buys off the fraudulent cop and bids the girl a hasty good-by. Which is just what she wants, as she immediately sets out to snare another innocent And the farce is played all over again, several times a night.

The great majority of the Broadway girls depend on others to help them clip their prey, but some of the smarter ones work alone. Such a one was Belle Dolan, whose short career was brought to a tragic end by sudden death.

Belle, a buxom miss from Pennsylvania, had just turned 15, though she appeared to be several years older. Her extreme youth enabled her to put over a unique bit of chicanery.

This lone wolfess would prowl the theatrical section until she met a sailor. First making certain her escort was carrying plenty of money, Belle would invite him to a nearby love nest.

After a suitable lapse of time, the girl swindler would separate the sailor from his bankroll in the most direct way imaginable. For no apparent reason, Belle would suddenly begin sobbing violently. The startled seaman would inquire the reason for the outburst of weeping.

“I’ve never done anything like this before,” Belle would wail, between sobs. “I came to New York to get $100 so my mother could have an operation. If I keep on like this, I’ll end up in jail. I’m too young to go to prison—I’m only 15.”

At this point, Belle would produce her birth certificate and dramatically cry: “See!”

The victim would take one look at that fateful bit of paper and gulp men the crusher would descend.

“You’ll have to marry me,” Belle would whimper. “If you don’t, I’m going to Police Headquarters and tell them what happened.”

The sailor, aware of the penalty for impairing the morals of minor, would try to dissuade Belle from doing anything so drastic. She would say she didn’t have money to go back home, so she would go to the police.

Of course, you know the answer. The sucker would provide the cash, afraid to squawk.

For several months Belle played the part of a wronged girl every night, and always collected. But there came a time when the play had an ending that was not written into her script.

A red-haired seaman, swarthy of ace, short of stature, with two lash-marks on his left sleeve accompanied Belle home on the night he curtain was due to fall. When the sailor discovered he had been marked for a shearing, he wreaked us wrath in a terrible manner.

The authorities label the demise of Belle Dolan one of the most gruesome slayings in the annals of Gotham criminology. The killer has ever been apprehended.

Of course, sex isn’t the only weapon in the arsenal of these feminine sharpers. Service men on furlough are always ready for some lively diversion, so when a beautiful girl suggests that they visit a floating craps game the response is generally an eager assent.

The gambling houses are mostly in New Jersey, but getting to them is no problem at all. The would-be player walks to a spot near 39th Street and Eighth Ave. Every 15 minutes a limousine pulls up. Sportsmen crowd into the car, which then drives through the Lincoln Tunnel where the game is held. When the gamester is finished playing, another limousine drives him back to New York. By then he is broke.

Are these games on the level? Let one of the victims tell it just as he related the sad tale to the police.

“I meets the gorgeous beetle at a dance and right away she says she wants some excitement. “Do I wanna play African Golf? I says, ‘Sure,’ so he hops over to Jersey.”

“I’m hooked plenty before it’s my turn to shoot. And the minute I get me mits on the dice I knows they’re loaded. I thinks to myself: two can play at that game.’ So, when I sevens out, I starts making side bets against the dice.”

“The house man then cracks: ‘You can’t do that here. We’re banking the game. Get that?’”

“I got sore. I says: ‘Gimme the loaded dice you’re using and I’ll bank the game myself.’ Well, one of the shills takes a pop at me, and I slug him back. Then some G.I.’s who were getting wised up joined in and we had a free-for-all.”

“We was doing all right too—until you cops broke it up.”

The more publicity given these crooked games the less chance they have of bilking the service men. But sometimes the extra-smart hustler figures a way to turn publicity to his advantage. 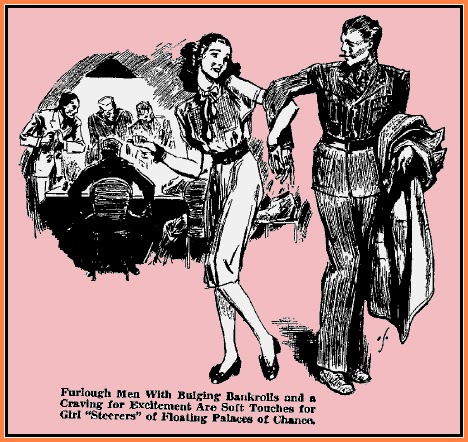 Some time ago many soldiers in Army camps were warned against a type of crooked dice which they were told were known as “tap dice,” The story they heard was that a honeycomb arrangement on the inside of the dice contained a ball of mercury. When the cheater wished to throw a certain number he held that number uppermost and tapped the dice. In a few seconds the quicksilver would fall to the bottom thereby causing the desired number to come up.

It was an interesting story, but it just wasn’t true. In my opinion, there never was, and there never will be, a workable pair of tap dice. Why?

First: Suppose the dice were loaded for a six and the cheater wished to fix it so a five would come up. The mercury would have to travel at right angles – an obvious impossibility.

Second: If the cubes had been fixed to throw fives, they would continue throwing fives until the quicksilver had been tapped into another compartment. In a real dice game the player cannot stop after every throw, tap the dice, wait three seconds and then play. Anybody trying such a ridiculous stunt would be shot.

TO THE gambling fraternity, “tap dice” are known as sucker bait. They are known to would-be cheats by the same business houses which peddle pornographic literature.

However, some soldiers who heard about tap dice didn’t know that they were not practicable. And a fly-by-night concern decided to cash in on the service men’s ignorance.

Field men were engaged to visit many Army camps. They dropped pamphlets where they were certain to be found by soldiers. Inside is an advertisement for “tap dice”— $20 a pair.

The great majority of the soldiers who “find” the booklet toss it into the nearest wastebasket. But a few send away for the “tap dice,” intending to swindle their buddies. Instead, they themselves are swindled.

Appropriately enough the trademark, of the company is the sign of the Triple Cross.

For a while another racket, posing as an Air Warden, was in vogue, especially along the coast where Civilian Defense workers were abundant.

An ex-convict joined the Air Warden Service, and before his fingerprints were checked, he succeeded in extracting money from his fellow wardens under various pretenses.

Another crook posed as an Air Warden and gained entrance to several homes in Westchester County, N. Y., robbing them and gagging the victims.

Then there is the old “sympathy” racket that’s being, used on innocent victims who, like all of then they hear a woman tell of her husband, father, brother or sweetheart having been killed in the war, or tortured by the Japs.

This kind of a racket flourished while the country was stirred so deeply by the Jap treachery at Pearl Harbor. Mrs. Clara Gollobin, for instance, was riding in a New York subway when an aged woman entered and sat next to her. She snuggled close to Mrs. Gollobin, telling her she felt cold.

Mrs. Gollobin listened with great sympathy. But when she left the subway she missed her handbag with money and jewelry in it. This trick was often repeated with variations.