Victimizing Veterans: The Alimony Racket in 1920 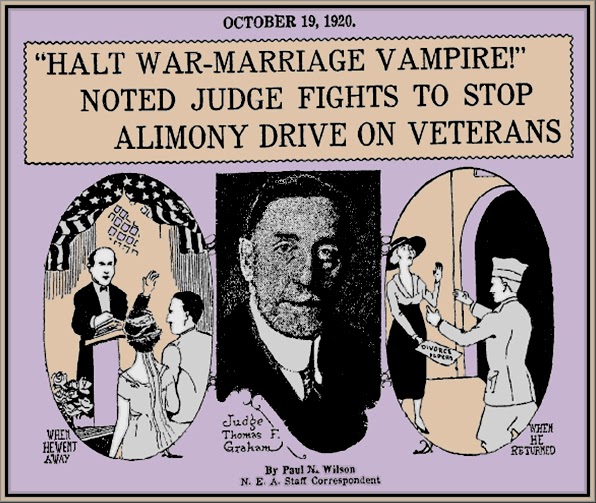 FULL TEXT (Article 1 of 2): San Francisco, Oct. 4.—The dollar vampire who schemed to mulct the American volunteer soldier in the great war under the guise of marriage, is cashing in through the divorce courts.

Amazed at the cynical assurance with which many such “war brides” have brought their alimony pleas before him, Judge Thomas F. Graham. Nationally known as the “Great Reconciler” for his mediation in domestic tangles, and deep student of the divorce problem, is seeking nation-wide co-operation of courts to thwart further victimization.

“Not alone to assure justice in individual cases,” says Judge Graham, “but to support the marriage institution and to check further growth of love cynicism among America’s youth, must courts be alert to see that disillusioned war veterans are not further bled in the marriage bunco game through undeserved alimony.

"Wherever possible, both parties should be compelled to appear in court. The woman’s story should not be sufficient, and diligent investigation of war marriages that smack ‘for alimony’ is particularly vital at this time.”

Blame for wreck and mercenary salvage of war marriages is not placed entirely upon women by Judge Graham. The haste and indiscretion of many men marrying on the eve of overseas departure made the designing overtures of women of that kind all too easy.

But such unions are not proper alimony cases, and it is this feature, that he is fighting with all the legitimate powers of the court.

Surprised by the unexpected return of soldiers whose allotments she sought, but whom she never again expected to see, the marriage profiteer is hastening to sever the matrimonial bond, but seeks to retain this financial tie.

“The matrimonial profiteer,” says Judge Graham, “is a thousand times more dangerous than the economic profiteer who can more readily be reached by law.”

“Since the war began, divorces have increased 50 per cent in California, and I am sure it is the same over the nation.”

“Thousands of young men in the heat of war married women who lived with them perhaps two or three days, then put in claims for alimony. I know of one case in which a woman married five soldiers and for long time collected allotments from each.

“Many married soldiers hoping they would be killed in France so that they could collect insurance.”

“Now that our soldiers have returned, many are finding how they have being victimized! They are too disgusted, too disillusioned to fight. The courts must do it for them.” 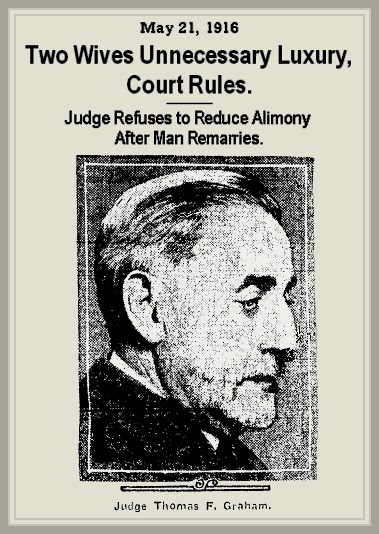 It is ironic that Judge Graham previously earned a reputation as a firmly pro-alimony judge, as can be seen in his harsh words spoken in this 1916 ruling:

FULL TEXT (Article 2 of 2): San Francisco, Cal., May 20. — A divorced man who is paying alimony to his former wife is in indulging in unnecessary luxuries when he marries a second time, according to a ruling of Superior Judge GRAHAM when he declined to make any reduction of alimony on the plea of William B. ISAACS, a civil engineer in the employ of the Southern Pacific Railroad.

ISAACS was divorced by his first wife, Mrs. Mary A. ISAACS, in March of 1913. His salary was $175 a month and Mrs. ISAACS was allowed $75 a month alimony. Yesterday he pleaded for a reduction on the ground that he had remarried and was unable to support two households.

“You should have thought of that before you took the second leap,” said Judge GRAHAM. “For a man in your position, a second marriage is an unwarranted luxury.” 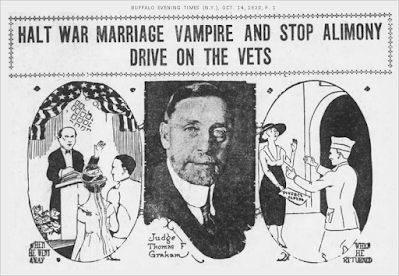 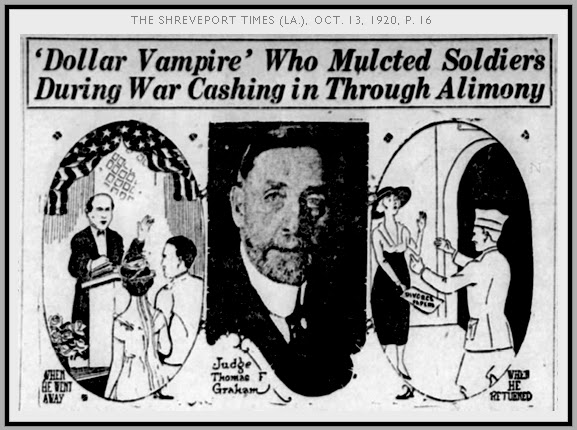