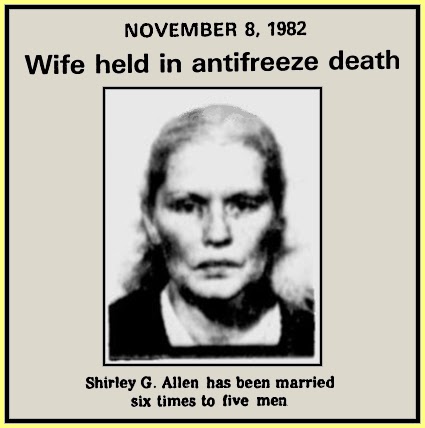 July 6, 1984 – Phelps County, Missouri, USA Conviction for the Lloyd Allen murder, sentenced to life imprisonment without eligibility for probation or parole for 50 years

FULL TEXT: Shirley G. Allen, who authorities say has been married six times to five men, was ordered held on $500,000 bond Monday after being charged with capital murder for allegedly spiking her husband’s beer and wine with antifreeze for eight months.

St. Charles, Mo. – An unemployed nurse charged with poisoning her husband with antifreeze was denied insurance benefits in the death of a previous husband she forged papers identifying her as the beneficiary, a St’ Louis newspaper reports.

In a copyright story Tuesday, the St. Louis Democrat said Shirley G. Allen, 40, had tried to collect some $17,000 in life insurance on a policy taken out against her fourth husband, Daniel E. Null, after he died from an apparent heart attack Feb. 17, 1978.

An investigation into Null’s death was launched after Mrs. Allen was arrested over the weekend in the poisoning death of her husband, Lloyd R. Allen, St. Charles County Sheriff Edward J. Uebinger said.

Mrs. Allen, who authorities say has been married six times to five men, was ordered held on $500,000 bond Monday after being charged with capital murder for allegedly spiking her husband’s beer and wine with antifreeze for eight months.

Court records showed Mrs. Allen had been married to Null, of St. Louis, before she married Allen, the newspaper said.

Null’s brother, David, said he did not believe a report by Dr. Faye G. Spruill, deputy chief medical examiner, which listed Null’s cause of death as arterioscierotic heart disease and reported findings of acute alcoholism.

“He never had any heart trouble, but he began to fall apart the last few months before he died,” David Null said.

Daniel Null married the woman one month after they met, but it was apparently not a happy marriage, his brother said.

About one month before his death, Daniel Null changed the beneficiary on his Teamster’s Union insurance from his wife to his brother, David, with the understanding that if he died, the money would be given to Daniel’s three children from a previous marriage, David Null said Monday.

“Shirley didn’t know that the insurance had been changed, and when she found out the night he died, she hit the roof,” he said.

Null said he never believed his brother had died of natural causes and that he had reported his suspicions to police, but nothing had come of it.

Null said he had to file suit to collect the insurance money because a benefit form identifying Mrs. Allen as the beneficiary had already been filed with the insurer.

A handwriting expert hired by Null later testified in a St. Louis U. S. District Court that Daniel’s signature on the form was a forgery, and the money was paid to David Null, the newspaper said.

William H. Storer, a handwriting expert from Clayton, said he had testified that the signature on the form did not belong to David Null. Uebinger said Monday that of Mrs. Allen’s five husbands, only Null and Allen were dead. [This was incorrect: According to other sources, John Gregg, married her in 1977 and died in 1978; Michael Newton, Bad Girls Do It!, An Encyclopedia of Female Murderers, 1993]

Ethelyne glycol is an odorless, sweet-tasting substance, which is considered extremely lethal.

Allen, an unemployed quality control analyst, died Nov. 1 of what was originally believed to be natural causes. No cause of death was recorded on his death certificate.

Several anonymous phone calls to a St. Louis television station and to the sheriff’s department prompted an autopsy, Uenbinger said.

St. Louis Circuit Attorney George Peach said he would consult with the medical examiner’s office on the possibility of exhuming Null’s body to determine whether he was the victim of foul play.

Null says he and his family would rest easier if his brother’s body were exhumed.

“I would like to see the death certificate changed if he was poisoned. It shouldn’t be on there about alcoholism,” he said.

NOTE: The following report is vague. Many poisons are difficult to detect in autopsies unless the examiner searches for that specific substance. Other substances can be lethal, depending on the condition of the subject, even though they are not considered poison. Considering that “heart disease and alcoholism” are cited as a cause, it is obvious that there are many benign substances can be introduced into a compromised body (weak heart and/or liver)  which would effectively act as poison. A daughter, Regina Null, St. Claire, Mo., still believes her father was murdered, as case be seen in forum posts from 2011.

A court ordered Null’s body removed from its grave more than a week ago after relatives said he may have been murdered by his wife, Shirley Allen.

Mrs. Allen, 40, is charged with capital murder in the alleged poisoning death of her latest husband, Lloyd Allen. An autopsy showed that his body was laced with ethelyne glycol, the active ingredient in auto antifreeze.

Norma Hawkins, Mrs. Allen’s daughter by an earlier marriage, has testified that her mother spoked Allen’s beer and wine with antifreeze for eight months prior to his death Nov. 1.

The death certificate fort Mr. Null, whop died in 1978 while married to Mrs. Allen, said he died of heart disease and acute alcoholism. Authorities said no autopsy was done because they accepted Mrs. Allen’s word on the condition of his health.

FULL TEXT (Article 3 of 4): Rolla, Mo. – A woman accused of killing her husband by adding antifreeze to his drinks once sent her two daughters to find some cyanide-laced Tylenol [*See note below], one of the daughters testified.

Norma Hawkins, 18, also told a jury Tuesday that her mother, Shirley Allen of St. Peters, Mo., sent the girls to buy antifreeze and said she “was going to use it to finish him off.”

Mrs. Allen is charged with capital murder for allegedly lacing Lloyd Allen’s beer and wine with antifreeze in the eight months before his Nov. 1, 1982, death.

Miss Hawkins, one of two daughters by a previous marriage, testified her mother watched television reports of the seven deaths in Illinois in October 1982 of people who took Tylenol capsules laced with cyanide.

“She would watch the news at night and write down the numbers” of the contaminated shipments of Tylenol, the daughter said.

She testified her mother sent her and her sister, Paula, 16, to stores to search for Tylenol bottles from those shipments, but they never found any.

* NOTE: The reference is to an unsolved serial killers case which took the lives of 7 persons. In addition to Shirley Allen, the Tylenol case inspired another woman who wanted to become a self-made widow. In 1986, Stella Nickell of Washington state killed her husband Bruce with cyanide-laced Excedrin in order to collect on his life insurance. In an attempt to cover her tracks, she also killed a complete stranger by placing three packages of tampered Excedrin and Anacin capsules on the shelves of three stores. One of the packages was purchased by Sue Snow, who became Nickell’s other victim. Nickell was sentenced to 90 years in prison. Thirteen years later, private detective Al Farr and his partner Paul Ciolino are on a mission to prove that Nickell is innocent.

FULL TEXT (Article 4 of 4): Rolla, Mo. – Shirley Allen has been convicted of capital murder for killing her husband by spiking his drinks with antifreeze and slowly poisoning him.

The Phelps County jury deliberated less than three hours before returning its verdict Friday against Mrs. Allen, 42, of St. Peters, who was charged with the Nov. 1,1982 death of Lloyd Ray Allen, 40.

The jury also recommended a life sentence without the possibility of parole for 50 years. Prosecutors said prior to the trial that they would not seek the death penalty.

During five hours of testimony Thursday, Mrs. Allen denied the accusation. In response to questioning from Kuelker, she responded softly, “I don’t know who did it.”

However, under cross-examination, she admitted she had not sought medical attention for Allen when he awoke vomiting at 3:30 a.m. the day he died. She said he declined her offer to take him to a hospital.

Two teen-age daughters of Mrs. Allen by a previous marriage testified during the five-day trial that they had seen their mother doctor Allen’s drinks with antifreeze. An autopsy performed on Allen’s body established the cause of his death as poisoning by ethyl-glycol, the lethal ingredient in antifreeze. 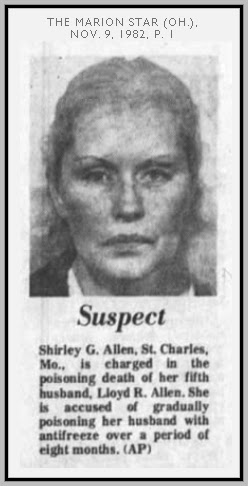 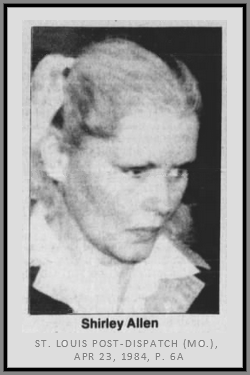 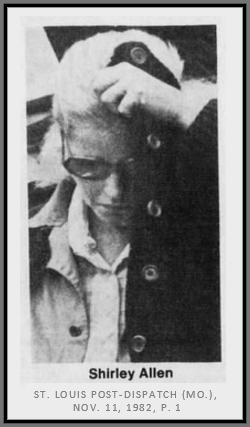