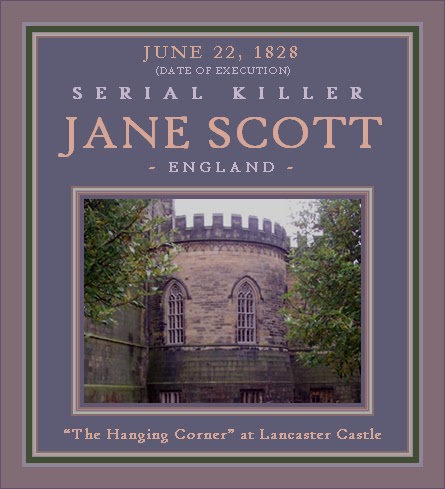 FULL TEXT: Jane Scott, convicted at Lancaster of having poisoned her father and mother, was executed there on Saturday [March 22]. The history of this woman is one of the most revolting depravity. Although only in her twenty-second year, she has, according to her own confession, been guilty of the murder of four of her fellow-creatures, having also poisoned two illegitimate children – one her own offspring, a boy of four years old, and the other a girl of eighteen months, belonging to her sister. The latter crime she committed through revenge, on account of a quarrel with her sister, and it was supposed the child died in a fit. Some inquiry was made into the death of her own son, but nothing could be proved. Ever since she was fourteen, she has led a dissolute life, and had been continually robbing her parents.

EXCERPT: On Monday the 14th of May 1827 Jane prepared some porridge for her parent’s supper as a result of which they both became violently ill.  They were attended by a local doctor, Dr. Brown, who was unable to do much for them. Mary died in the early hours of Tuesday morning, by dawn Jane’s father had also succumbed.  Dr. Brown testified at the trials that he had instructed Jane to keep the pot in which the porridge had been made for examination but when he returned for it he found that Jane had cleaned it thoroughly, removing all trace of the porridge and the arsenic it contained. Dr. Brown informed the authorities and an inquest was held that concluded that Scotts had died from arsenic poisoning, administered by their daughter. Jane was therefore arrested and sent to Lancaster Castle to await trial at the next Assizes. [from: “Jane Scott – Murder of her parents in 1827,” Captial Punishment UK] 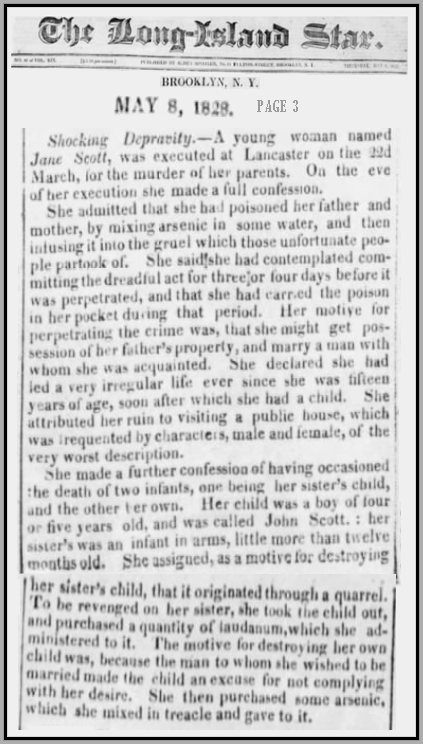