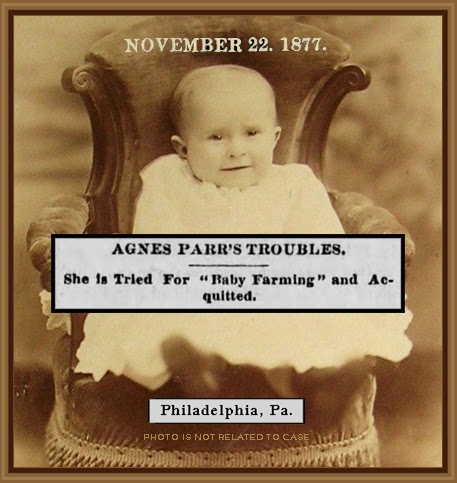 Note: As with all other known baby farmer prosecutions in the United States for infanticide it was impossible for the prosecution to meet the evidentuary standard.

FULL TEXT: Agnes Parr, the alleged “baby farmer,” was put upon trial in Judge Thayer’s Court, yesterday, for infanticide, in causing, through neglect, the death of a small babe, which had been intrusted to her keeping by an unknown mother. The Commonwealth alleged that Mrs. Parr, who lived in Rementer court, back of 932 Arch street, had several small children, all in a sickly condition, in her care for rearing. The Society for the Prevention of Cruelty to Children attention was brought to her institution and their agenty paid her a visit. Two small children were taken from her and placed in the Almshouse, where they subsequently died – one of them supposedly by reason of her neglect and ill-treatment. At the trial, yesterday, these facts were testified to. The defense, which was represented by Thomas B. Price and Maxwell Stevenson, showed, upon cross-examination of the nurse in the Almshouse who had charge of Mrs. Parr’s babies, that almost invariably all infants brought to that institution would, afer a few days, die. It was also testified by the supposed baby farmer’s neighbors that she was kind to her young charges and respected by all who knew her. Judge Thayer, in charging the jury, said that the prosecution had failed to connect the child’s death with Mrs. Parr’s alleged ill-treatment, and therefore the evidence was not strong enough to warrant a conviction. The Judge then inquired of her counsel whether she was still carrying on the same business, and being told no, he ordered her discharge, with the remark that he otherwise would have held her to bail to keep the peace.