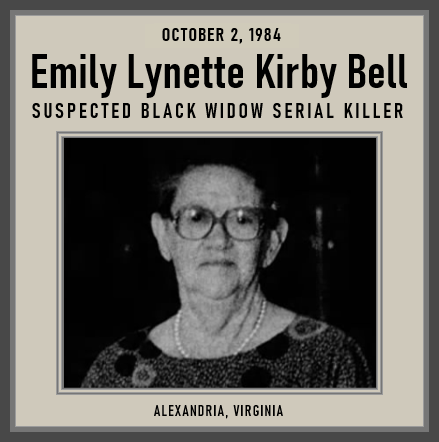 FULL TEXT (Article 1 of 3): A 64-year-old woman was arrested yesterday in Alexandria and charged in the death of man that officers had earlier said they believe is one of a series of suspected arsenic poisoning victims.

Lynette K. Bell of the Colony Apartments, 2133 Simmons St., in Alexandria turned herself in to investigators at the Rapides Parish sheriff’s office Tuesday morning. She was accompanied by her attorney, Mike Small.

Mrs. Bell has been charged with second-degree murder in connection with the death of Mountville B. Townley, 43, of Pineville who died May 11.

In addition she is charged with criminal conspiracy and arson with the intent to defraud. She is being held on $200,000 bond.

Caddo Parish Coroner and forensic pathologist Dr. George McCormick was called into the investigation. He analyzed a sample of Townley’s blood and determined there was a “lethal level of arsenic in the blood sample.”

Dawn Fain, a lab assistant to Dr. McCormick, told The Times yesterday that she had tested the contents of a John Henry whiskey bottle, also sent to the lab along with Townley’s blood sample. Ms. Fain said, “I found traces of arsenic in the whiskey.”

Rapides Assistant District Attorney Earl Humphries said Tuesday that the arson charge relates to the May 6 burning of a house owned by Mrs. Bell in Pineville. “She had the insurance on it,” he said.

Humphries said the conspiracy charge alleges that she conspired with some other person to commit a criminal act.

Officials have said that they suspect six other suspected arsenic deaths during the past 12 years are related. The bodies of the six others, five men and one woman, were exhumed last month from Butters Cemetery in Glenmora, a small town in southern Rapides Parish. They were sent to Dr. McCormick’s forensic pathology laboratory in Bossier City where autopsies were performed.

Humphries said a common thread exists in that each of the dead knew Mrs. Bell. He said she “knew, married or cared for them.”

Dr. McCormick;s laboratory findings as yet incomplete are expected to be the key to determining whether other charges will be sought against Mrs. Bell.

Humphries said he expects to present information in the other cases to a Rapides Parish grand jury meeting in two weeks.

FULL TEXT (Article 2 of 3): Alexandria detectives, investigators and prosecutors met in Bossier City yesterday with Dr. George McCormick to discuss his findings involving the suspected arsenic poisoning of six men and a woman during the past 12 years.

The findings have not been made public.

McCormick, a forensic pathologist and Caddo Parish coroner, is considered the key to determining whether additional charges will be sought against a woman who has already been jailed on one charge of murder by arsenic poisoning.

Lynette K. Bell, 64, was arrested on a charge of second-degree murder in connection with the poisoning death of a Glenmora man, Mountville Townley, 43, who died May 11 in a Pineville apartment owned by Mrs. Bell.

Additionally, Mrs. Bell is charged with criminal conspiracy and arson with intent to defraud. She is being held in Rapides jail under $200,000 bond.

Since her arrest, McCormick and his assistants at his Bossier City laboratory have been conducting tests on six other bodies exhumed as suspected arsenic poisonings. All of these are people who knew Mrs. Bell. Their exhumations were prompted by investigation into Townley's death.

Contacted at home last night, Humphries said, “We are not going to release anything until the evidence can be presented to a grand jury which will meet the first week of October.”

Detectives from the Pineville Police Department and the Rapides Parish sheriff's office made the trip to Bossier City with Humphries to go over McCormick’s findings.

It had been previously reported that Rapides officials are expected to file additional charges against Mrs. Bell. However, Humphries said. “I don't anticipate any additional charges,” until after the October grand jury meeting.

The persons whose bodies were exhumed are Venson Bell, who was married to Mrs. Bell for more than 20 years; William Eugene Johnson and Tanzy Clifford Reeves, both of whom had licenses to marry Mrs. Bell; Earl Campbell, who once lived with Mrs. Bell for a period before his death that was an accidental shooting: Blanche Foreman, a woman who once lived with Campbell and was reportedly taken care of by Mrs. Bell just before her death; and Ira Butter, whose exact relationship with Mrs. Bell hasn;t been determined.

FULL TEXT (Article 3 of 3): Alexandria, La. – A 67-year-old woman accused of poisoning three men for their insurance money has been released on bail after three years in jail awaiting trial.

Bell is accused of using arsenic to fatally poison Tanzy C. Reeves, who died in 1979 at age 61, and Mountville Townley, 43, whose death in Ms. Bell’s Pineville apartment in 1984 prompted her arrest.

She also is accused of trying to poison Earl Campbell, who, prosecutors say, killed himself in 1982 before the arsenic reached fatal levels.

The state contends the murders were part of a scheme by Ms. Bell to collect insurance money and the estates of the victims.

Defense attorney George Higgins said appeals and the complexity of the case had delayed Bell’s trial.

“It hasn’t been dilatory tactics by either side,” Higgins said.

Ms. Bell took out two marriage licenses with Reeves and claimed to have been married to Campbell. Townley was living with her at the time of his death.

EXCERPT: [Tanzy Clifford Reeves] claimed at one point prior to their marriage that Lynette was trying to kill him, according to friends.

Reeves cooked a pot of gumbo one day, and Lynette fixed him a bowl to eat. Reeves tasted the gumbo and noticed something was wrong with it, he told friends and relatives. Reeves poured the gumbo into a jar and supposedly brought it to a chemist friend of his who worked at a laboratory to be tested, one of Reeves’ earlier wives told police.

Reeves claimed to relatives that the that chemist told him there was enough speed in the gumbo to “kill 10 people.”

That was not the only time his food was spiked with drugs.

Mrs. Blevins recalled that on occasions her mother would tell her not to eat a certain food.

Mrs. Blevins said she never really ate at her mother’s house after she learned from Lynette about “the Reeves treatment.”

EXCERPT: Mrs. Blevins’ theory goes along with Humphries’ assessment. She believes her mother poisoned the three men, not for money, but because Lynette “hates drunks.” Mrs. Blevins also made the blanket statement that her mother “always hated men. She did. She had a deep-seated hate of men. She hated sex.”

Mrs. Blevins believes the alcoholism of her grandfather, Lynette’s father, inspired the killings because of Lynette’s memories of abuse at his hands.

The hatred of drunks may have been exacerbated by Lynette’s mental problems – problems even Higgins [the defense lawyer] recognizes. Higgins has had Lynette examined twice to determine if she is mentally competent. Both times psychiatrists found Lynette legally sane and capable of standing trial. 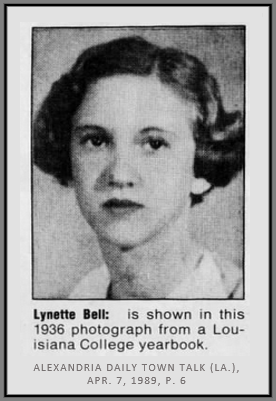 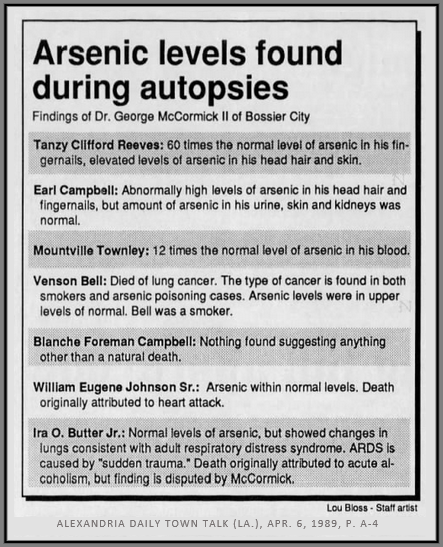 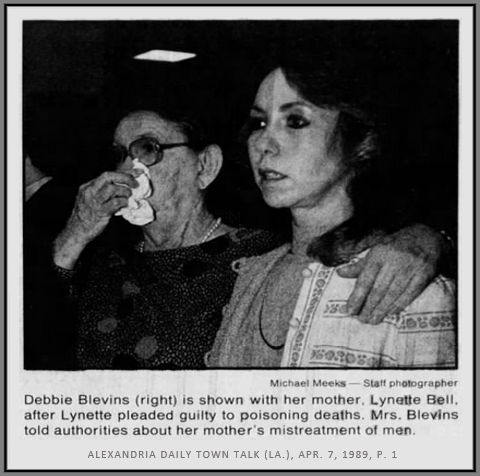 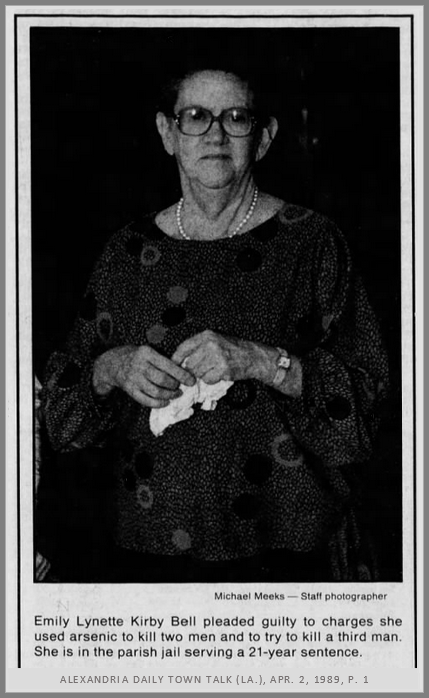 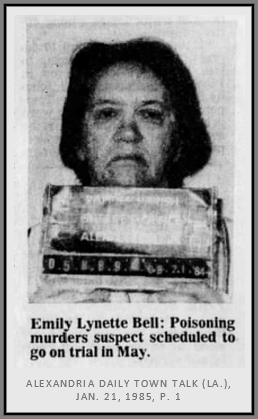 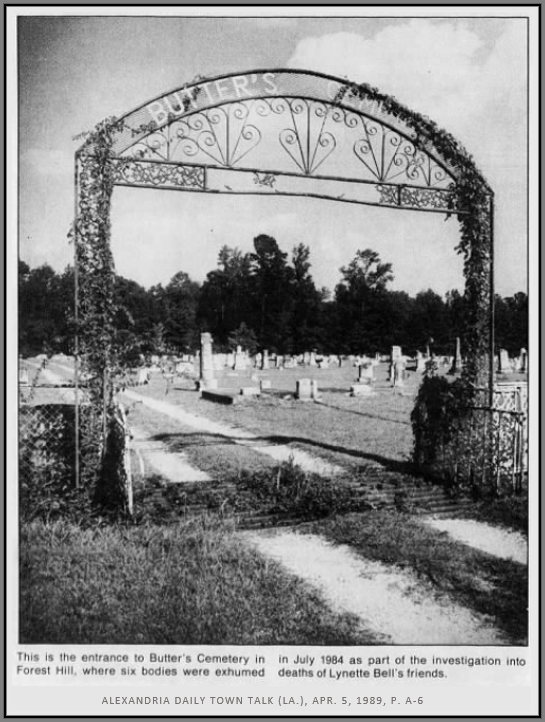 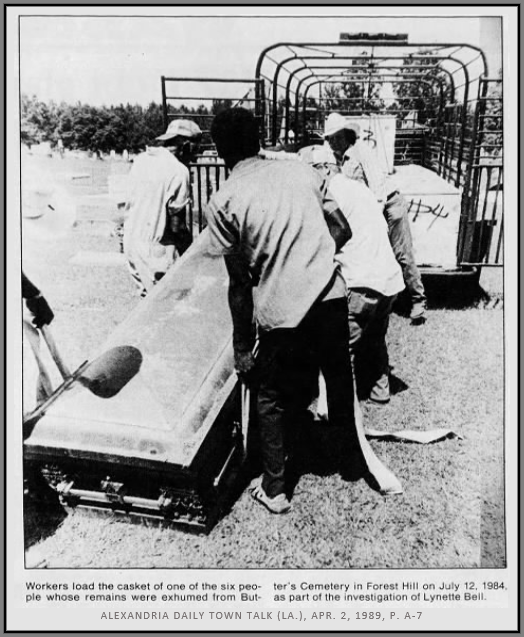 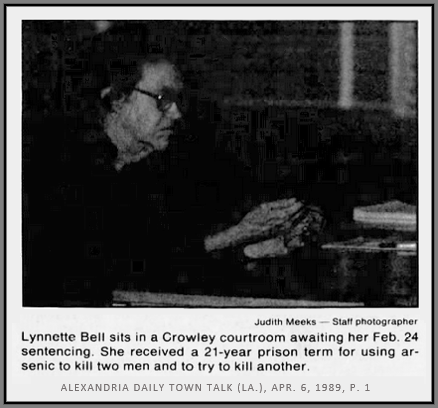 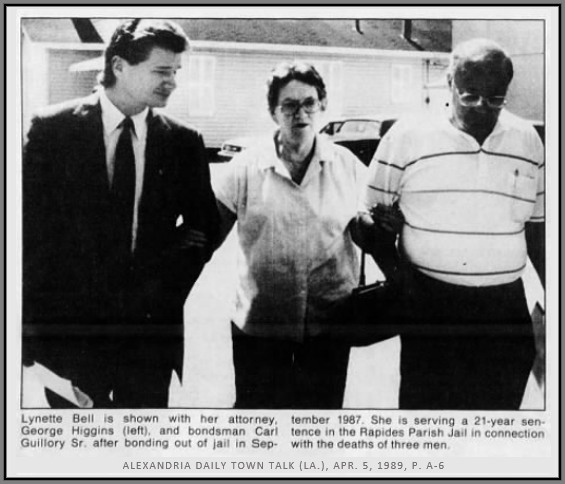 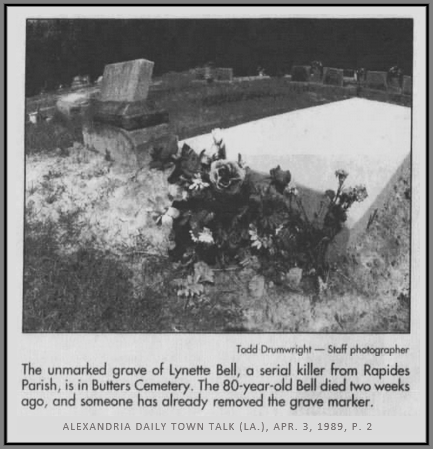 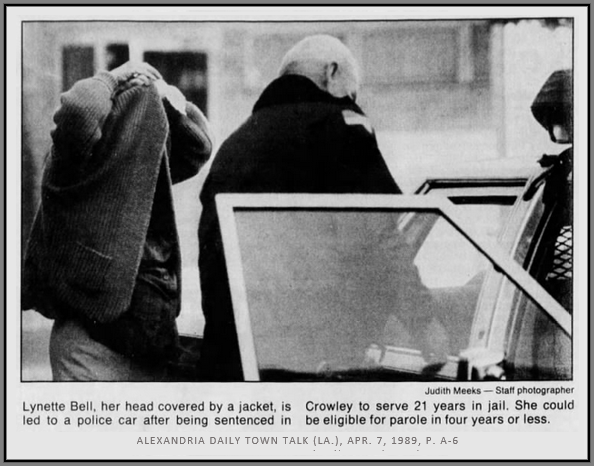 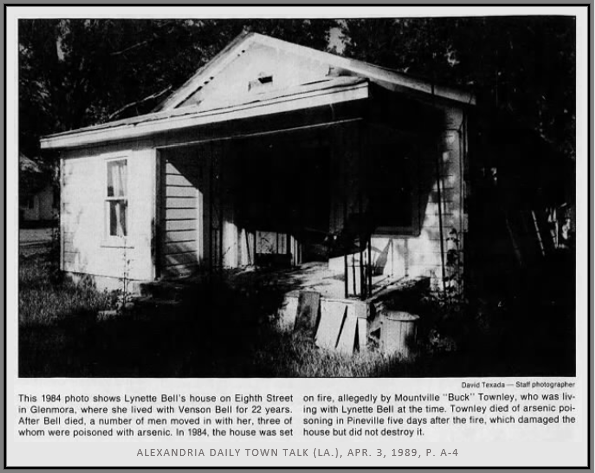 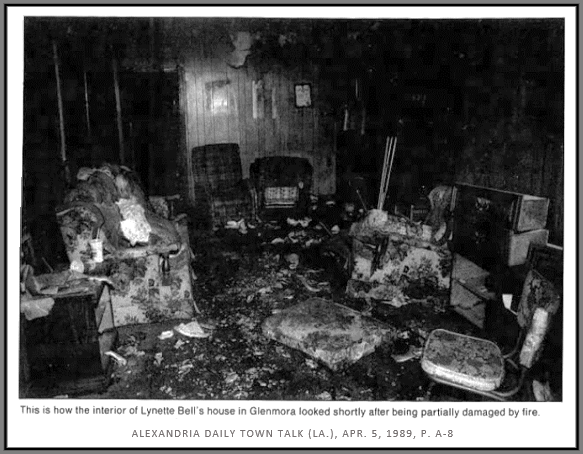 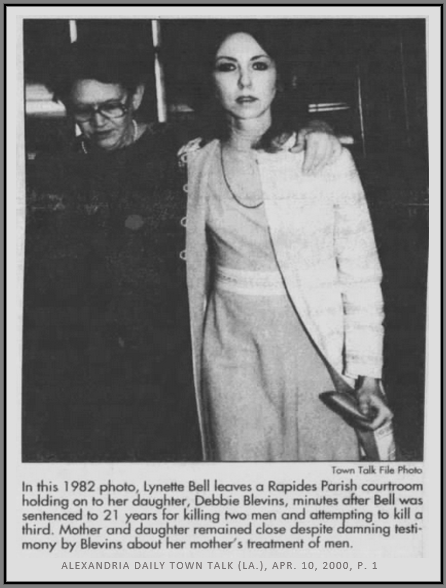 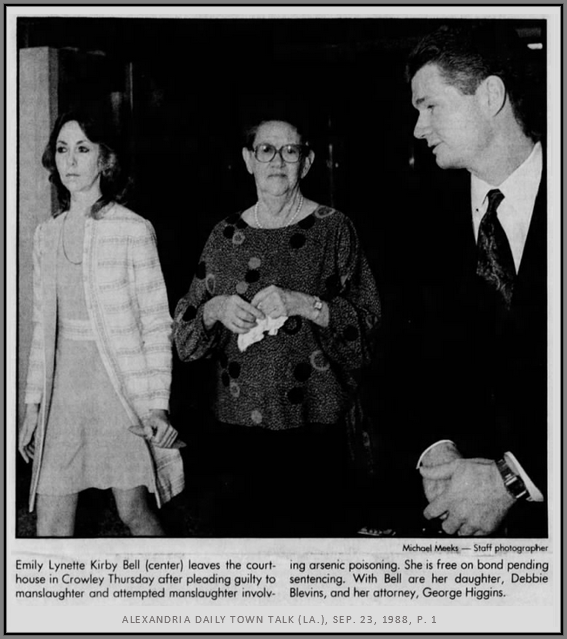 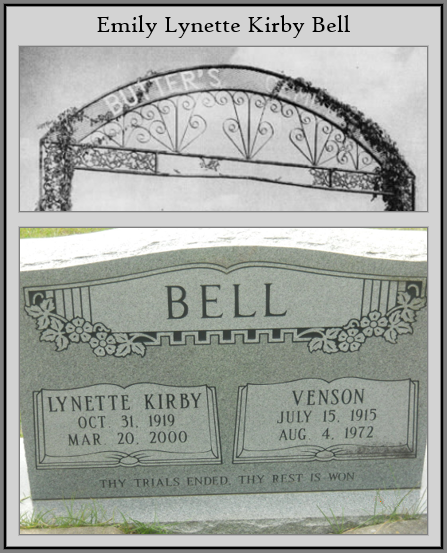 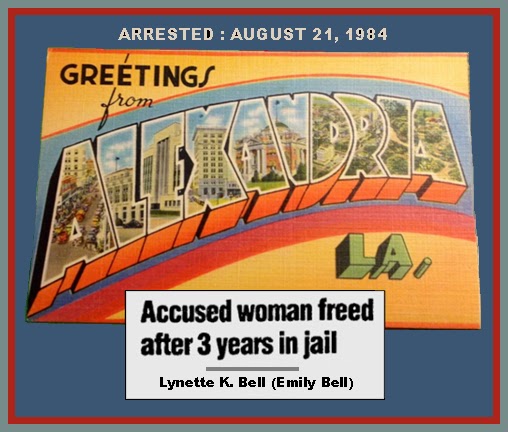