Queen Olympias of Macedonia & Her “Studied Cruelty” – 316 BC 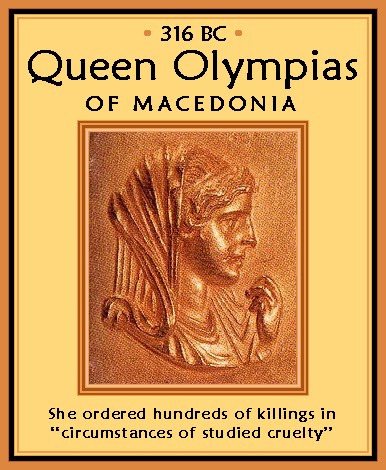 EXCERPT (Article 1 of 3): Olympias,  (born c. 375 bc – died 316), wife of Philip II of Macedonia and mother of Alexander the Great. She had a passionate and imperious nature, and she played important roles in the power struggles that followed the deaths of both rulers. The daughter of Neoptolemus, king of Epirus, Olympias apparently was originally named Myrtale. Later she may have been called Olympias as a recognition of Philip’s victory in the Olympic Games of 356 bc. [Envyclopedia Britannica]

EXCERPT (Aricle 2 of 3): Olympias.—Death of Arrhideeus and Eurydice.— Victory of Cassander. The conduct of Polysperchon had been but weak, and the queen Eurydice appears to have succeeded in that which was her constant endeavour, to supplant him in the management of her feeble husband, and the government of Macedonia. To recover his lost power, he brought Olympias into play. He advanced with her into Macedonia, and Eurydice and Arrhidaeus led their forces to oppose him; but the Macedonians refused to fight against the mother of Alexander, and Eurydice and her husband fell into the power of Olympias. She mercilessly abused her success; the royal captives were put to death, with circumstances of studied cruelty; and the chief friends of Cassander were sought out for slaughter, including his brother, with a hundred of the most eminent Macedonians. But the hour of vengeance was not far off. Cassander had been united with Eurydice, by the closest friendship certainly, and, if prevailing report be trusted, by unlawful love. He was now hastening to avenge her death, and that of his brother and friends. By vast activity he made his way into Macedonia, though great endeavours had been made by the friends of Polysperchon to occupy the passes. The barbarity of Olympias had disgusted the Macedonians, and she now obtained from them but little support. She was besieged through the winter in Pydna, and in the spring the town was obliged to submit, and Olympias surrendered, only stipulating for her life.

Death of Olympiasi The sequel is an abominable tissue of treachery and murder. Amphipolis still held out for Olympias, and it was only by her bidding that Aristonous, the commander, was induced to surrender the place. The high character of Aristonous excited apprehension in Cassander, who had adopted the base policy of destroying all whose ability was such that their opposition might be dangerous. He procured the death of Aristonous; and then proceeded by dark and crooked ways to fulfil his revenge against Olympias. Some of the kindred of those whom she had murdered were prevailed on to accuse her in the Macedonian assembly; she was absent, and had none to speak for her; and the assembly condemned her to death. Cassander sent some of his own friends to advise her to secret flight; he offered to provide a ship which should convey her to Athens; and this he did that, by her flight, she might appear to acknowledge the justice of her sentence, and might then be put to death in the course of the voyage. She refused to escape, and demanded to be heard in her defence before the assembled Macedonians; but Cassander, dreading the effect of her presence, withheld his consent. He then selected two hundred soldiers to despatch her; they entered the house, but on seeing her their resolution failed, and they retired. At length the execution was performed by the kindred of her victims. She died with the greatest firmness. (B. C.315.)

***
EXCERPTS (Article 3 of 3): Philip and Olympias were to have two children, Alexander and a daughter, Cleopatra, but after Philip saw his wife sleeping with snakes; his days of visiting the bedchamber were over. Olympias had long been a devotee to the cult of Dionysos, something that angered many of the Macedonian people and she may even have introduced the practice of handling snakes to the cult.

In 336 BCE at the wedding banquet of Olympias’ brother Alexander to her daughter Cleopatra, Philip was assassinated by the disgruntled Pausanias of Oretis, who had been rebuked by Philip after he had asked for retribution against Attalus. Suspicion immediately fell upon Olympias who some believed had encouraged Pausanias to seek revenge and kill Philip. Plutarch wrote, “When Pausanias, who had been assaulted at the instigation of Attalus and Cleopatra, murdered Philip for failing to recompense him, most of the blame attached itself to Olympias, on the grounds that she had encouraged the young man in his anger and incited him to do the deed …” There is even some evidence that she had horses waiting for the assassin to use for his escape. ] http://www.ancient.eu.com/Olympias/ ]