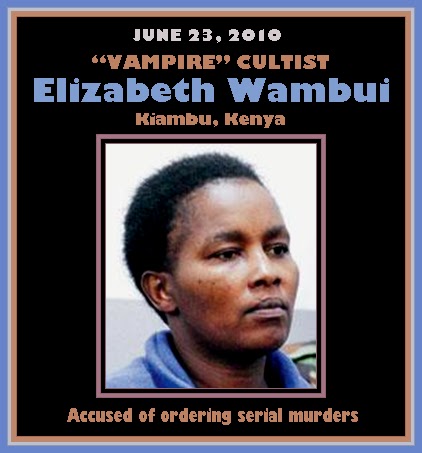 FULL TEXT: Nairobi, Kenya, Jun 23 – A Kiambu based teacher who allegedly recruited self-confessed serial killer Philip Onyancha into a cult has been charged in court.

Elizabeth Wambui was arraigned before Kibera Magistrate’s court and charged with administering oath to Mr Onyancha.

She denied the charge and has been remanded in custody for four days to allow police conclude investigations.

Ms Wambui was arrested two weeks ago and has been in custody since she was picked from her house in Kahawa West.

Mr Onyancha and two of his accomplices are already facing murder charges in court but police have indicated they will be pressing more charges against the self confessed killer, who has admitted to murdering 19 people.

Police have also indicated that they may prefer more serious charges against Ms Wambui once they conclude the investigations.

She was charged that on unknown dates in 1996 at Mahiga High School in Nyeri, she administered an oath to Mr Onyancha purporting it would blind him to commit an offense of murder when called to do so. According to the prosecution, the suspect who was Mr Onyancha’s Kiswahili and CRE teacher at Kenyatta High School in Nyeri, introduced him to the cult by lacerating him twice in the chest and smearing him with some ash.