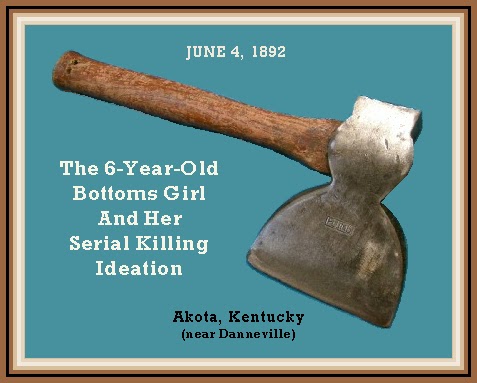 This astonishing case involves a 6-year-old obsessed with a desire to murder babies. She was successful, after planning the deed long in advance, to murder her 18-month-old sister and expressed the desire to kill more babies in the future.

FULL TEXT: Danville, Ky., June 4. – The 18-months-old baby killed by its demon 6-year-old sister, both daughters of Mose Bottoms, colored, at Atoka, five miles west of here, was buried in the colored cemetery near Atoka Friday morning in the presence of a large concourse of colored people, a few of the whites who live in the neighborhood being present.

To say that the whole community is horror-stricken over the terrible deed conveys but a mild idea of the situation. The youthful murderess expresses no regret for her act, but says she always intended to kill the baby, and would have done so long ago had she not been watched so closely that she could not.

She is fairly intelligent, and never manifested any special viciousness until a desire to harm her baby sister was first noticed when she mashed the poor little innocent’s finger and toe-nails off with a hatchet ten days ago. She experienced more pleasure in thinking and talking about what she had done than pain over the severe whipping she received for her unnatural act.

When the fifteen-year-old colored girl, who had been watching the children all day to keep the eldest from harming the baby, returned to the room she found the murderess in great glee, and still swinging the deadly club in her hand, while at her feet lay the lifeless form of her victim.

Her father, an honest, hard working colored man, is almost heart broken over the horrible affair. He lost his wife seen after the birth of the murdered infant, and since then, having to go out to work, the children have been badly cared for. When asked this morning if she would like to kill any one else, she answered that she would like to kill some more babies.

It is not known what will be done with her, as she is too young for a criminal prosecution to be thought of it is probable she will be sent to a school of reform, as it is generally feared that if permitted to go at large she will develop a murderous propensity equaled to no child of modern times, save, perhaps Jesse Pomeroy, whose terrible murders of twenty years ago are still remembered with horror.

[“Another Demon – Kentucky Produces a Veritable Female Jesse Pomeroy, – Who Chuckled With Glee After Murdering Her Baby Sister. – She Says She Is Glad She Killed the Infant, and Wants a Chance to Butcher Some More – Community Horror-Stricken Over the Deed.” Public Ledger (Maysville, Ky.), Jun. 4, 1892, p. 3]

Note: In 1872, at the age of 12 Jesse Pomeroy – of Massachusetts – began assaulting other boys, torturing them and sometimes leaving them with lifelong scars. He was convicted and paroled. After release, at the age of 14, he murdered two children, a 9-year-old girl and a 4-year-old boy.

FULL TEXT: Danville, Ky., June 3.—Wednesday night at Atoka, 5 miles west of here, a 6-year-old colored girl killed her 18- months’-old baby sister by knocking its brains out and breaking its neck with a piece of stovewood. Last week she took the same baby out of the house, and, seating it on a rock, mashed off several of its fingers and toe nails with a hatchet. She had frequently threatened to kill the baby, and, since the finger and toe nail smashing, has been closely watched. They are the children of Mose Bottoms, whose wife is dead. Thursday the two were watched by a 15-year-old girl while the father was out at work. The watcher left the room for a short time, and when in an adjoining room she heard the oldest cry out: “I've killed the baby, come and get it.” When she returned the child was dead. 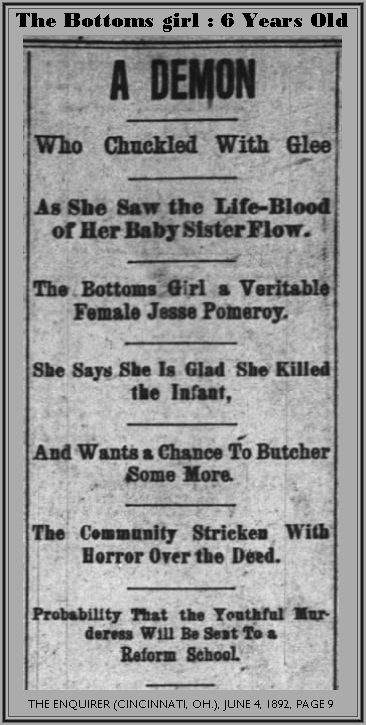 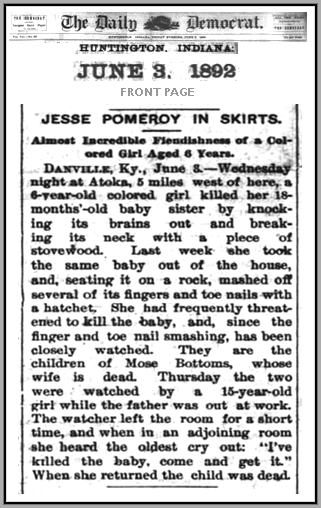