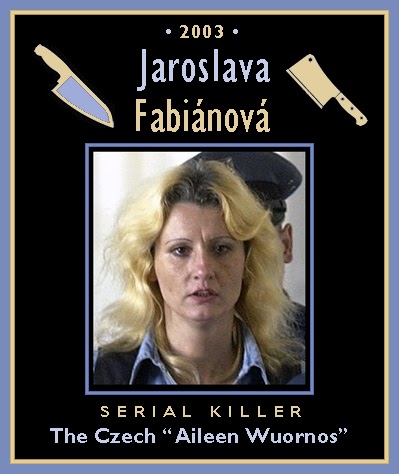 Nicknames given by the press (translated from Czech): “Devil with an Angel’s Face,” “Pub Harpie,” “Killer Siren.”

According to Czech journalist Marie Šrámková, serial killer Jaroslava Fabiánová experienced a miserable childhood and was repeatedly raped as a minor. She discovered homosexuality as a way seeking sexual satisfaction without needing to bother with men, whom she had grown to find incompatible. As an adult she lived with a lesbian girlfriend, the money earned money by prostitution and by robbing prospective customers. In the role of prostitute, she would commonly drug the men she picked up before sexual intercourse would occur and rob them. [Marie Šrámková, Oct. 30, 2008, Zena]

Between 1981 and 2003 she murdered four men, two of them elderly, aged aged 84 and 78. She was convicted and served time for murder twice, but was allowed parole, allowing to continue her criminal career. From the beginning, Fabiánová’s killings are particularly savage. At the age of 17 her victim was subjected to a battering with a masonry hammer consisting of three blows on the head, followed by twenty knife stabs in the face. Her final murders, in 2003, involved attacking an 84-year-old man with a meat cleaver and the stabbing of another man 38 times.

There are quite a few articles on this case in Czech available online, but to date there is no Wikipedia entry.

Jaroslava Fabiánová as the third Czech woman in the history of the independent Czech Republic sentenced to life imprisonment. 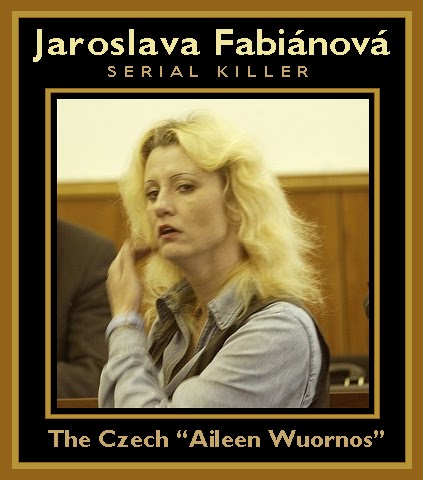 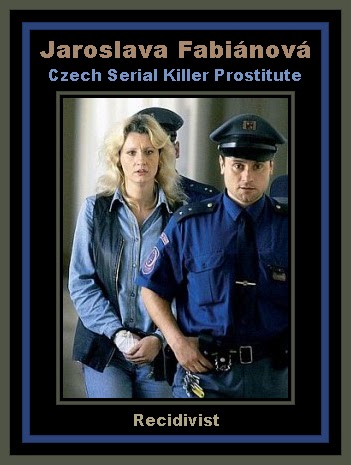 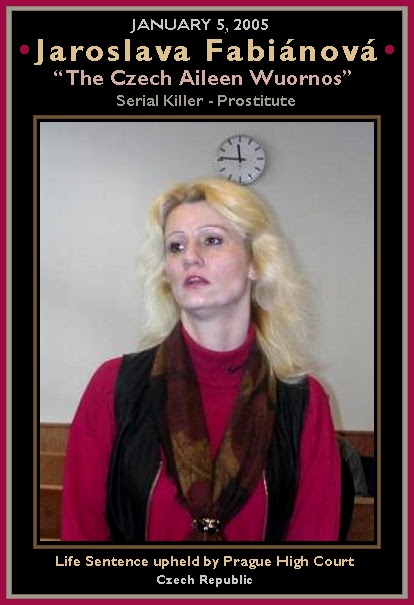 Wikipedia has created a page in January 2019 for this case:


Jaroslava Fabiánová (born 1965 in Děčín) is a Czech serial killer who committed a total of four financially motivated murders between 1981 and 2003. She has served the penalties for the first and second murders, while she is currently serving a life imprisonment sentence after being found guilty of the other two murders and other crimes. Their similar backgrounds, psychopathology and modus operandi led the media to refer to Fabiánová as "the Czech Aileen Wuornos.”

Jaroslava Fabiánová was born in 1965, and was raped during her childhood. Her parents divorced when she was 13 years old, and since neither parent showed interest in their children, she was left without money. In 1981, in Děčín, she joined a group of Roma peers who fed themselves through small thefts and occasional prostitution. At the turn of October and November, Fabiánová took part in several burglaries, including that of the "Snowdrop" cafeteria, on which she left trace evidence. Because of this, the burglary was investigated by the police. In October, 78-year-old Vladimir Z., who looked for sexual services, went to her apartment. He did not pay Fabiánová, and so she killed him in the kitchen with a few blows from a masonry hammer and about 20 stab wounds with a knife to the chest. In addition, she stabbed him in the face with a stitching awl. Based on fingerprints left on a box of cocoa and footprints in the burglary, she was apprehended a day after the murder. As a minor, she was sentenced to 7 years imprisonment, but served only 4 years and 9 months.

After serving her punishment, she became a switchman at České dráhy, but continued earning money as a prostitute. Her clients complained about the sexual intercourse due to her lesbian orientation, so she began to drug and then rob them. Among the robbed was an American who lost $7,000 and electronics for 250,000 crowns, and two Hungarian tourists whom she robbed of $150,000 after drugging their beer with a hypnotic in the hotel room. One of these men, however, was a cardiac and, as a result of an ingestion of a high dose of medican combined with alcohol, died. Fabiánová was sentenced to 10 years in prison, followed up with a 5-year ban on visiting Prague, serving her sentence at the female prison in Pardubice. She was released for good behavior in 2001. Although she still had a ban on moving around Prague, she stole a cell phone in February 23, which she then sold to a pawnbroker. However, she sold it using her own identification papers, was imprisoned and sentenced to one year in jail with 3 years probation.

On June 5, 2003, Augustin K. was found in Prague's (now-defunct) Poříčí district. He had been murdered in the kitchen with a cleaver, with the corpse then pulled out of the living room, sat in a chair and covered with a blanket. The apartment was then robbed of three paintings and electric tools worth 50,000 crowns. DNA traces found at the scene matched Jaroslava Fabiánová. As a woman, who was sitting on the ground floor of the house in the Šatlava restaurant on the day of the victim's murder, she recognized Fabiánová. Another witness said that she helped her by selling one of the stolen paintings to a gallery for 10,000 crowns. Originally, Fabiánová had offered all three paintings, but she sold one later herself for 2,000 crowns and she later disposed of the last one because it was damaged. After this, a search warrant was put out for her. At the beginning of August, she was hospitalized in Prague, and after she was released from the hospital, she decided to stay in the city. On August 8, she met 31-year-old Richard S. on a tram, who invited her to a disco and then to his home. There, Fabiánová stabbed him 38 times in the bathroom with a knife. At the crime scene her traces and, above all, traces of her DNA were found on the victim's fingernails. On August 22, she was captured and accused of both murders. During the investigation, she claimed that Augustin K. gave her the paintings, and because he did not feel well, she left the apartment. In the case of Richard S., she admitted that she had robbed the man, but continued to claim to have not hurt him. In 2005, she was only the third woman in the history of the Czech Republic to be sentenced to life.