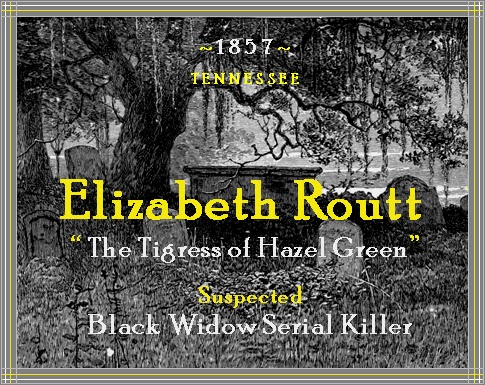 FULL TEXT: It was once said that six grinning skeletons encircled the marriage couch within the walls of the Hazel Green [Alabama] plantation home of Mrs. Elizabeth E. Routt.

After almost 130 years, the guilt or innocence of Mrs. Routt in connection with the sudden and mysterious deaths of her six husbands remains in question.

All that remains of the mystery today is found in the weathered pages of court records, the ruins of the plantation home and in a small, crowded graveyard under an immense holly tree a mile east of Hazel Green.

History also records that “her appeal to men was unusual.”

Upon reaching womanhood, Miss Dale married ... First to a man named Gibbons, then to a Mr. Flannigan. All that remains of those marriages are the notations, “both died rather mysteriously a short while after, leaving no children.”

Not long after the death of his first wife, Alexander Jeffries, a plantation owner from  Madison County, visited Tennessee and met the former Elizabeth Dale.

Following a courtship and subsequent marriage, the couple returned to the Hazel Green plantation, They lived there until 1837 when Jeffries died at the age of 65.

“Whether there was any suspicion concerning the cause of his death is not known, for his will, filed the next year, states that he was in bad health, though of sound mind, records show.

Taking over operation of the plantation, new widow ruled slaves “with an iron hand” and wasted little time in securing another master for the estate.

He was Robert H. High, of Limestone County, who served as representative in the state, legislature from 1833 to 1839. High married the then Mrs. Jeffries in 1839, and history records only his sudden death in 1842.

Absalom Brown became the next pretender to the throne of Elizabeth. The New Market merchant was married to the again-widowed Elizabeth on March 16 1846.

Following her marriage to Brown, Elizabeth proceeded with long-thought-out plans for A fine home to which she might invite her guests, some of whom were members of Madison County’s most prominent families.

The invisioned home, on the same site of the former two-story log cabin dwelling, took a slave and carpenter more than a year to build. “Furnishings were the richest obtainable,” a history of the time records.

The home became a center for festive parties, “Where every convenience was furnished. Even servants’ bells in each room.”

But the, splendor and gaiety of  the Brown plantation came to a sudden end on a night in 1847, only a year after the marriage, when Brown died of a strange malady.

Brown’s death was slow and painful and the strange, malady “caused his body to swell so that it was necessary that he be buried during the night following his death.” Records reveal the fact that, “‘Present residents of the county recall that their parents and  grandparent’s often remarked on their part in the ceremony there in the dark, aided only by lantern light, held by shaking darkies.”

On May 11 of the following year she was married to her sixth husband, Willis Routt. Her spouse soon followed the path of his predecessors and died soon after the wedding.

Records indicate that only the name Elizabeth High Brown Routt was recognized by her family because of the code of etiquette of the time that three trips to the altar were enough for any respectable woman.

[Despite Elizabeth Routt’s] unusual appeal to men, there was one man who did not succumb to her charms. The nearest neighbor to the Routt plantation was Abner Tate. During the years immediately following the death of Elizabeth’s last husband, several squabbles erupted between Tate and the widow, stemming from loose livestock and other plantation matters.

The neighbors jointly confessed no liking whatever for each other.

The squabbles continued to progress in their degree of bitterness and ultimately led Tate to openly charge Elizabeth with the murder of each of her six husbands.

To support his contention’ of the foul deed, Tate told a strange tale. Tate’s charge, “substantiated by sight,” was that in the main hallway of the Routt home Elizabeth kept a hat rack on which hung a hat from each of her dead husbands.

Tate’s charges were never verified and the case was dropped. But Tate’s involvement with Elizabeth was far from finished.

In 1854, Tate was severely wounded by a shotgun blast to the stomach. The slave who fired the shot was killed before he could comment on his actions, but a wave of  rumors alleged that “the tigress of Hazel Green” had taken her revenge.

Tate recovered from his wounds but his problems were not over.

Not long after Tate’s recovery, reports began to circulate that a drover from Kentucky, on his way back from selling his herd in South Alabama, had been murdered at Tate’s home and cremated in a large fireplace there.

The source of those reports was said to be Mrs. Routt who enlisted the aid of a suitor to prefer a charge of murder against Tate. The suitor was D. H. Bingham, a Meridianville school teacher.

Tate was acquitted in court of the murder charge and subsequently tried to clear his name further by publishing a pamphlet with the elaborate title “Defense of Abner Tate Against Charges of Murder Preferred by D. H. Bingham.”

In the publication, Tate charged that Elizabeth’s “bridal chamber was a charnel house” and spoke of her as the woman “around whose marriage couch six grinning skeletons were already hung.”

Another reference to Mrs. Routt is found in court records of 1857. Mrs. Routt filed a suit claiming $50,000 in damages from Tate’s publication.

The court records one such excerpt from Tate’s pamphlet which Mrs. Routt found offensive.

“Poor  soul -- she is alone -- she ought to have a husband. And then such a husband - an industrious sober husband like D. H. Bingham! She has not been particularly fortunate in. that  respect heretofore and in Bingham’s opinion was entitled to all the consolation an industrious sober man can bring to the bed around which nightly assembles a conclave of ghosts to witness the endearments that once were theirs and shudder through their fleshless forms at the fiendish spirit which wraps the grave worm in the bridal garment and enforces a lingering death with a conjugal kiss.”

The question of whether Ms. Routt was Madison County’s answer to Bluebeard or merely the victim of misfortune and a vengeful neighbor probably will never be known.

All trace was lost after the move and only a few mementos remain to keep alive the memory of Mrs. High Brown Routt.

There are the remains of the plantation and, in the words of a historian, “A few yards to the south of the house, beneath an immense holly tree, surrounded by a low thicket, tombstones lie in a random pile-that of husbands, child and ancestor, a harbor for reptiles and field mice.”