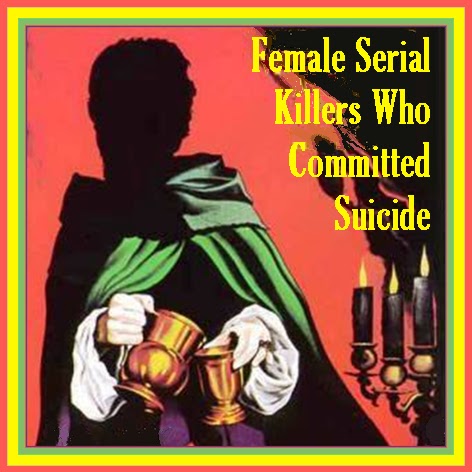 The unfortunate woman hung herself in her cell a few hours before the appointed time.


Ms. Wenzel, better known as “Mrs. Hoffman,” committed suicide by poisoning. There was little doubt that she had previously poisoned her step-daughter to death, and had made attempts on the life of her husband, who was lying ill at the time of her death. She probably poisoned her first two husbands.


Sophie Gauthié murdered seven of her own babies and a granddaughter, all under the age of one year. Before her arrest, she tried to commit suicide by using the same method she used on her children. She was found guilty and executed by guillotine.

The woman Schneider, who was arrested with her husband for decoying and murdering servant girls, attempted to commit suicide. Her recovery is hopeless. [Note: She did, in fact, recover, and go on trial.]

Mrs. Butler attempted suicide by taking laudanum, and, failing in her purpose, another poison was brought into play, which concluded the job.

“As the crowd tried to enter the prison and lynch the poisoner, the woman was brought to Catania. Here she made an attempt to cut open her veins with a broken windowpane.”

In November 1891, she was admitted to Gloucester Asylum following a bungled suicide attempt.

“By December, 1906 police issued warrants for the arrest of Herman Billick and Rosa Vrzal. All six bodies were exhumed and autopsies determined that they had all died of arsenic poisoning.   Though they were able to arrest Billick, Rosa managed to escape them by committing suicide with arsenic before she could the police could catch up with her.”

Credited with at least ten murders, she survived two years in captivity before manually strangling herself in 1910.

Discovery was made Nov. 4, 1911, that Mrs. Louise Vermilya, who is under police guard at her home charged with poisoning Policeman Arthur Bissonnette, had attempted to take her own life with arsenic. A quantity of the poison was found in her bedroom in a pepper shaker.

Sensational developments occurred this afternoon in connection with the investigations by detectives into the mysterious disappearances of several babies adopted by the woman Isabella Newman, who committed suicide at her house in Mordialloc, after detectives had placed her under arrest.

“When Raya was finally landed in a cell after a fight in which she all but succeeded in driving a dirk into her breast she was placed in solitary confinement.”

A close guard is being maintained today [Nov. 5, 1923] over Mrs. Eliza Patigian [error, “Potegian” in most sources], charged with poisoning her step-daughter, following an attempt to commit suicide by strangulation in the county jail here yesterday afternoon. The attempt by Mrs. Patigian to end her life followed receipt of word that her mother, Mrs. Maria Torosian had committed suicide by hanging at the Torosian ranch home west of Fresno.

Mrs. Hauptrief’s body was found in the morning shortly after 7 o’clock suspended from a narrow band from her cell door in the Hayes County jail, where she had been during the last five months on a charge of poisoning her four stepchildren and attempting to poison her husband.

Mrs. Cunningham, recovering in a hospital from an attempt to strangle herself, has admitted the poisoning of three children.

A number of bodies were exhumed and arsenic was found in them. Police inquiries quickly broke down the wall of fear which had so strangely protected the guilty, and several people confessed. The evidence against Madame Fazekas piled up so quickly broke down that she was on the point of being arrested when she took her own life.

Susi [Suzi] refused to talk and was released. She made her way to her home village and visited several of her women friends. She told them to keep their mouths shut. Unknown to Susi, the police had let her go, hoping she would lead them to the other conspirators. The scheme worked. All the women were taken into custody. All except Susi. When the police called at her home, there was no answer. They found the mass murderer in a closet. She had hanged herself. Thirty-one women were placed on trial in Szolnok for the arsenic poisonings.

The confessions showed that the widow [of] Balint Czordas [Christine] was the second in command, a sort of vice-president of the murder syndicate. She confessed to having helped poison twenty husbands and, also, during the hungry years, just after the war, a few children who were hard to feed. The morning after her confession the authorities wished to ask one or two more questions, but she had committed suicide during the night. Three other widows, sharing her cell, had watched Balint make a rope from bedding and hang herself, without interfering.

“Additional precautions were taken last night to guard a confessed woman principal in a widespread insurance-poison ring who twice attempted suicide while shouting “witches” were chasing her. High police officials said no official report had been made, but guards declared on one occasion they found Mrs. Carina Favato with a handkerchief knotted around her neck. Several hours later, they said, she plunged a safety pin into her arteries.”

Police ordered an autopsy in the death in her prison cell on Aug. 25, of Josefa Idler. She was sentenced to death Aug. 24 for the poison slaying of two of her four husbands.

At the start of the probe, Mrs. Perkins shot herself in the chest in a suicide attempt, but was hospitalized and recovered.

While awaiting trial, she hanged herself with a prison bedsheet on Aug. 8, 1984, and left a note saying “at last I have found peace.”

Autopsy results on Julia Lynn Womack Turner showed she died from the "toxic effects of the prescription medication propranolol, a blood pressure medication that Ms. Turner had been prescribed," according to Georgia's chief medical examiner.

After the unnamed woman’s suicide, the skeletal remains of four newborns were found in her home.

Attempt: she cut her wrists, but only superficially, and swallowed an overdose of pills.

Aug. 16, 2018 – Serial killer Joanna Dennehy is believed to have tried to kill herself in jail after apparently making a grisly suicide pact with her prison girlfriend. Dennehy, 35, is understood to have been found with her throat slit, while her lover had cut her wrists. A source told The Sun: “When the guards found them they were entwined on the floor, which was covered in blood.” [Daily Mail, Aug. 16, 2018]