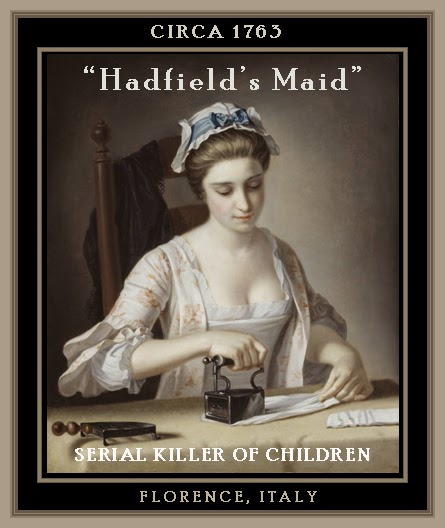 From a letter by Mary Hadfield Cosway, dated May 24, 1830 (punctuation and spelling modernised):

I may relate a circumstance at my birth as extraordinary as unheard of.— Four or five children were born before me. Put to nurse out of town, my mother used to go frequently found the child well and to her great surprise the next day the nurse came and the child had died in the night. Changed nurse, changed place, the same happened through four children. At my birth my father resolved to take a nurse in the house and had a governess to keep always a watch on the nurse and the child.

One day a maid servant went in the nursery, took me in her arms, and said: “Pretty little creature, I have sent four to heaven I hope to send you also.”

The governess, struck at this extraordinary speech, ran to my father, proper enquiries were made. The woman said she thought it doing a good act and was confined for life from that instant.

My father said I should be brought up a Catholic and all his children, were also. When four years old I was put into a Convent, under the protection of the Grand Duke and Grand Duchess of Tuscany. [From this passage can conclude that the nurse’s crimes were discovered, circa 1763, before Mary was four years old.]

Maria Cosway was born Maria Luisa Caterina Cecilia Hadfield (pronounced Mariah) in 1760 in Florence, Italy to Charles Hadfield, said to have been a native of Shrewsbury, England, and an Italian mother. Her father was a successful innkeeper at Livorno and had become very wealthy. The Hadfields operated three inns in Tuscany, frequented by British aristocrats taking the Grand Tour. One of eight children, Maria demonstrated artistic talent at a young age during her Roman Catholic convent education. She remained a devout Catholic all her life.

Four of the Hadfield children were killed by a mentally ill nursemaid, who was caught after being overheard talking about killing Maria. The nurse claimed that her young victims would be sent to Heaven after she killed them. She was sentenced to life in prison. Only Maria, her brothers Richard and George, and a younger sister Charlotte survived.