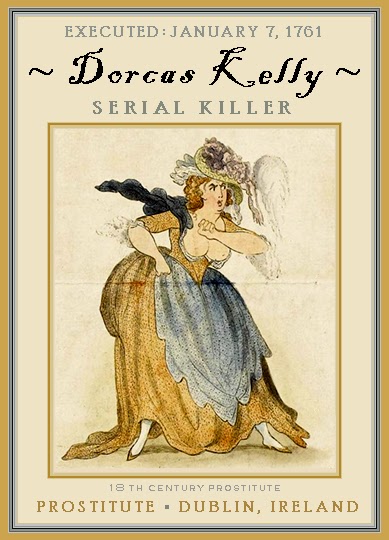 Newly revealed contemporary accounts reveal the real Dorcas Kelly (“Darkey Kelly” in popular legend), who operated the Maiden Tower brothel in Copper Alley, off Fishamble Street in Dublin, was actually accused of killing shoemaker John Dowling and investigators then found the bodies of five men hidden in vaults in her brothel. Prostitutes reportedly rioted in Copper Alley following her execution. Eamon McLoughlin and Phil O'Grady, researcher, made the discovery which was revealed in 2012.


Wikipedia: Dorcas Kelly was a madam who operated the Maiden Tower brothel on Copper Alley, off Fishamble Street in the southwest part of Dublin, Ireland. Accused of killing shoemaker John Dowling on St. Patrick's Day 1760, her brothel was investigated by the authorities. Investigators then found the corpses of five men hidden in the vaults of her brothel. Kelly was executed by partial hanging and burning at the stake on Gallows Road (modern Baggot Street). After her execution she was waked by prostitutes on Copper Alley; thirteen of them were arrested for disorder and sent to Newgate Prison, Dublin.

An account of the 1773 execution of the murderess Mrs Herring on St. Stephen's Green, Dublin, gives an idea of what Kelly's execution may have been like:

“She was placed on a stool something more than two feet high, and, a chain being placed under her arms, the rope round her neck was made fast to two spikes, which, being driven through a post against which she stood, when her devotions were ended, the stool was taken from under her, and she was soon strangled. When she had hung about fifteen minutes, the rope was burnt, and she sunk till the chain supported her, forcing her hands up to a level with her face, and the flame being furious, she was soon consumed. The crowd was so immensely great that it was a long time before the faggots could be placed for the execution.” [Edward Cave ("Sylvanus Urban"), The gentleman’s magazine, and historical chronicle, Volume 43, London, 1773]

Various legends grew up around Kelly after her execution. The most common story is that she became pregnant with the child of Dublin’s Sheriff Simon Luttrell, 1st Earl of Carhampton, a member of the Hellfire Club. She demanded financial support from him. He responded by accusing her of witchcraft, and killed their baby in a Satanic ritual. The body was never found. Darkey was then burnt at the stake.

This story may have its origin in one told about Luttrell's son Henry, who supposedly raped a girl in a brothel, and then had the girl and her family imprisoned under false charges. ["Dorcas Kelly," Wikipedia, accessed Jul. 23, 2016]

A chapter recounting the Dorcas Kelly story: “Copper Alley and the Maiden Tower,” Chapter 5 in: Maurice Curtis, To Hell or Monto: The Story of Dublin's Most Notorious Districts, The History Press Ireland, 2015