Chicago’s Women Who Got Away With Murder – 1935 Report 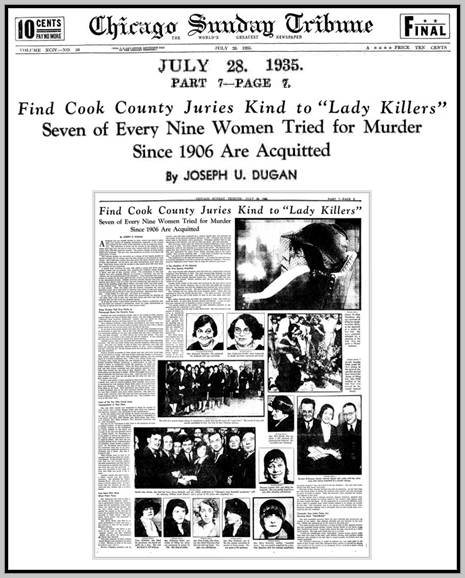 FULL TEXT: A woman still can commit murder in Cook county and stand a better than even chance of escaping punishment, especially if she chooses her husband as the victim, more especially if she is young and attractive. The statement is borne out by records of the Criminal court, which shows that only two out of every nine women tried for murder in Cook county since 1906 have paid any penalty. The greater number of these women killed their husbands. The few who were sentenced to prison were either old, unattractive, or both.

A typical case, revealing the ease with which a young nd fairly pretty woman quickly won an acquittal after shooting her husband, Joseph Pollak, a death, was that of Mrs. Dorothy Pollak. The prosecutors in this case realized that their greatest difficulty in securing a conviction was not the evidence, but the attractiveness of the defendant. They demanded that several women be chosen for the jury, believed that women would be less susceptible to the defendant’s charms. Defense attorneys adroitly blocked this move by waiving their client’s right to a jury trial and trusting her fate entirely to the ruling of the presiding judge, Harry Fisher, who then (1932) was chief justice of the Criminal court. The hearing was the quickest murder trial on record in Cook county. When the judge read his decision, acquitting the comely defendant, there was a wild burst of cheering from scores of men and women who had packed the courtroom to hear the proceedings. Afterward Mrs. Pollak said: “Judge Fisher is a nice man. He looked at it sensibly.”

At the time of the murder Mrs. Pollak had characterized the shooting as “the dirty trick I did to poor Joe,” and both before and after the trial she had killed her husband in self-defense, which the judge characterized “the law of nature and the right of every human being.”

Probably the most sensational similar case in the annals of Cook county’s woman slayers was that of Beulah Mary Annan, who was widely publicized as “Chicago’s most beautiful murderess.” Beulah shot and killed her lover, Harry Kalstedt, during a drinking bout in her in her apartment in 1924.

After shooting Kalstedt, whom Beulah entertained in her home while her husband was at work, the slayer kept a drunken vigil over him while a phonograph blared out her favorite tunes until he died in her apartment in 1924.

At the time of her arrest Beulah told police she had killed Kalstedt because he threatened to leave her. But at her trial, dressed in a fashionable gown and frequently smiling at the jury, she testified that she was a virtuous wife who had been wronged. At times during the recital she sobbed. The jury acquitted her, and within a few weeks she left her husband. It was reported she had gone to Hollywood in search of a movie contract.

Another woman slayer who received kind treatment from a jury was Belva Gaertner. She shot and killed Walter Law, married salesman, following a gin party. Her case was similar to that of Miss Cora Orthwein, who shot and killed her married sweetheart, Herbert Zeigler, in 1921. Cora’s explanation was she “loved him so.” On the witness stand she said she fired in self-defense and was acquitted.

Women accused of murder in Cook county and who were later freed were not all attractive or young. The case of Mrs. Catherine Cassler is illustrative. This woman, portly, past forty, and unromantic looking, was the principal figure in a murder conspiracy case. With a Mrs. Lillian Fraser and a younger man, Loren Patrick, she was charged by the state with having murdered William Lindstrom, a cabinetmaker, in order to collect a share of Lindstrom’s $7,500 life insurance, of which the Fraser woman was beneficiary. When the three were arrested Patrick and Mrs. Fraser confessed and were granted separate trials. They both testified for the state of Mrs. Cassler’s trial. She was found guilty and sentenced to death. Within forty-eight hours of the data of execution her attorneys won a stay. Later the state Supreme court ordered a new trial, but the state did not retry the case and Mrs. Cassler was freed.

It was a case similar in some respects is that of Mrs. Sabelle Nitti Crudelle, who, with her second husband, Peter Crudelle, was accused of murdering her husband, Frank Nitti, owner of a small truck farm near Stickney. Crudelle at the time of the murder was the hired hand on the farm. Both defendants were found guilty. Two of Mrs. Crudelle’s sons by her first marriage testified for the state. Mr. and Mrs. Crudelle were given death sentences. The state Supreme court, however, ruled that they had been convicted on insufficient evidence and the state dropped the case. The Crudelles went back to the truck farm.

~ Some of the Few Who Found Juries Unsympathetic to Their Pleas ~

The only other woman ever sentenced to death for murder in Cook county was a Creole, Maggie Titter, who killed her husband. The sentence, however, was committed to life imprisonment.

In the last twelve years the number of women convicted of murder has not increased. Among the few who found it impossible to sway juries were Mrs. Tillie Klimek, Mrs. Kittie Malm, Mts. Elizabeth Unkafer, Mrs. Eliza Nusbaum, Mrs. Margaret Summers, Mrs. Wynekoop. [Note: Klimek and Summers were serial killers.]

The case of Dr. Wynekoop is still fresh in the memories of most newspaper readers. It was a sensational murder because of her age and previous record as a useful citizen. Dr. Wynekoop was found guilty of killing her daughter in law, Rheta, and was sentenced to serve 25 years in prison. Her trial was complicated because of her weakened physical condition, which caused a postponement. Dr. Wynekoop was brought into the courtroom each day in an invalid chair and was constantly attended by physician a nurse. She was sentenced in 1933.

Another woman who used arsenic as a lethal weapon was Margaret Summers. She poisoned her nephew Thomas Meyer. She was convicted and given a 14-year prison term. It may be noted that the pictures of Mrs. Summers and Mrs. Cassler bear a resemblance.

Mrs. Nusbaum was tried in 1926 to the murder of her husband, Albert. It was a particularly brutal and revolting crime, and her accomplice, John Walton Winn, was convicted and hanged. But the jury which heard the evidence against the woman in the case did not break the precedent that women are not executed in Cook county. Mrs. Nusbaum, found guilty, was sentenced to life imprisonment.

Mrs. Kittle Maum, who died in the Joliet penitentiary in 1932, was given a life sentence in 1924 for the murder of Edward Lehman.

Florence Stokes was given a sentence of one year to life on a manslaughter charge, and Mrs. Elizabeth Unkafer was given life imprisonment for killing Sam Belchoff.

The great majority  of Cook county’s woman slayers were adjudged not guilty not guilty in court. Mention of some of the more sensational cases follows:

Bernice O’Connor, youthful and attractive, who had been employed as a cabaret cigaret girl, was arrested for the murder of her divorced husband, Edward, 1931. O’Connor was shot killed killed in his former wife’s apartment. Witness testified that he had threatened to kill Bernice, who did not take the stand. She was acquitted.

The prosecutors in the case and afterward: “It is just the same old story, it is almost impossible to convict a woman for killing her husband. This jury, however, deliberated much longer than is unusual for juries in such cases.”

~ A Few Members of the Majority Who Won Speedy Acquittals ~

Mrs. Rose Franks, alias Emerich, shot and killed her common-law husband, Policeman Paul Emerich, in 1927. The state charged that Emerich was shot while seated at the dining table. The defense denied this and charged that Mrs. Franks fired because Emerich abused her. When both sides had concluded the jury retired. Fifteen minutes later later the jurors returned with a verdict of not guilty.

Another quick verdict of not guilty was returned by the jury which heard the case of Mrs. Bertha Hellman, who in 1926 shot and killed her husband, Herman. Her defense was that her husband and attacked her with a butcher knife. She choked him to death. The jury found her not guilty in 27 minutes.

Mrs. Hellman did not typify the usual husband slayer.  When she was preparing to leave the county jail she said: “I’m sorry to leave. Everyone was so good to me, and I had plenty of time to sew and make some nice things.”

Mrs. Lillian Schaede shot and killed her husband in 1926. The bullet entered his back. In court Mrs. Schaede pleaded self-defense. A jury of business men required only 13 minutes to reach a verdict of not guilty.

“I’m surely ticked at the verdict,” was Mrs. Schaede’s comment as she walked from the courtroom a free woman.

A little unusual was the case of Katie Craft. She was accused of the murder of Frank Falato, a 14-year-old boy. He had entered her apartment to retrieve a ball. Mrs. Craft asserted the shooting was an accident and that she had not intended to fire the gun. The jury agreed and acquitted her.

Mrs. Mary Kuna, who stabbed her husband to death in 1925, was worried when her trial opened. A plain woman, she had heard that juries were only kind to young and pretty slayers. “I wonder if the jury will let me go as they do pretty women?” she was heard to ask her daughter. The jury took three ballots and Mrs. Kuna was freed.

The case of Mrs. Bernice Zalimas was full of sensations. After her first trial she was found guilty of killing her husband with arsenic and was sentenced to serve 14 years in prison. Then the Supreme court reversed the verdict and ordered a new trial.

In the second trial a defense attorney, Eugene McCarthy, asserted that he believed the amount of arsenic found in the victim’s vital organs could not have caused his death. At the suggestion of a prosecutor McGarry then took a dare to swallow some white powder alleged to be poison, an exhibit in the trial. The courtroom was in an uproar a few minutes later when McGarry collapsed, sobbing, but it developed that he had merely been overcome by his own emotions.

The next sensation occurred when the jury returned and pronounced its verdict of not guilty. Mrs. Zalimas shrieked and ran forward to the jury box. Wildly she embraced all of the jurors in the front row.

The latest murder case involving a woman is that of Mrs. Blanche Dunkel. She has confessed hiring another woman, Evelyn Smith, to kill Ervin Lang, Mrs. Dunkel’s son-in-law. Lang’s body, minus the legs, was found in a Hammond swamp. The legs were found near by in a trunk.

“Juries are considerably more ‘hard boiled’ toward woman slayers today than they have been in the past,” said Wilbert Crowley, first assistant state’s attorney, who pointed to the fact that in recent months convictions have exceeded acquittals.

Mr. Crowley’s statement, it might be pointed out, was made prior to the night of July 24 last, when Mrs. Margaret Rose, comely 22-year-old toe dancer, was acquitted of the murder of her husband, Walter, stabbed to death with a butcher knife on July 4. 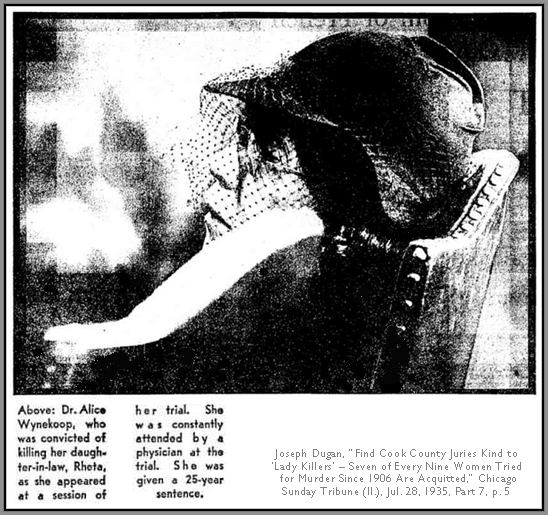 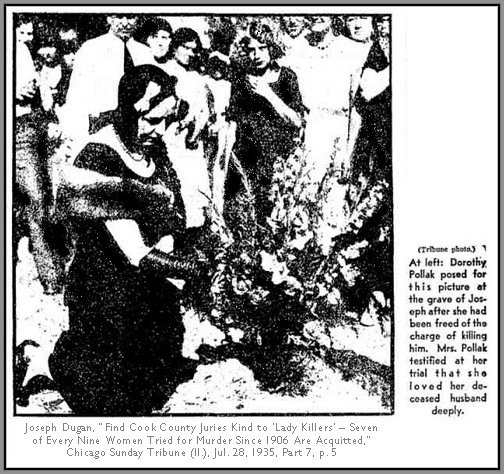 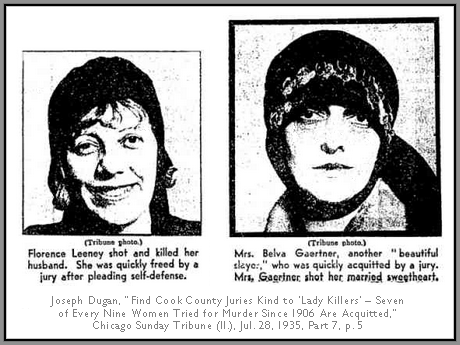 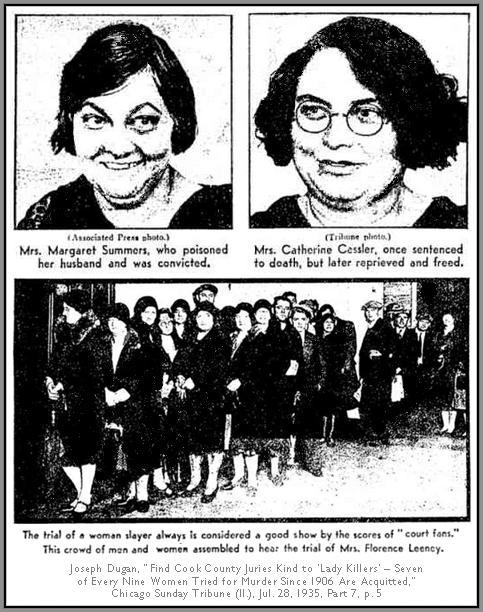 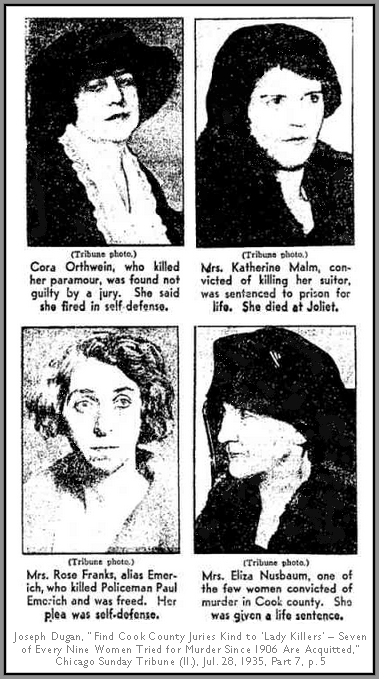 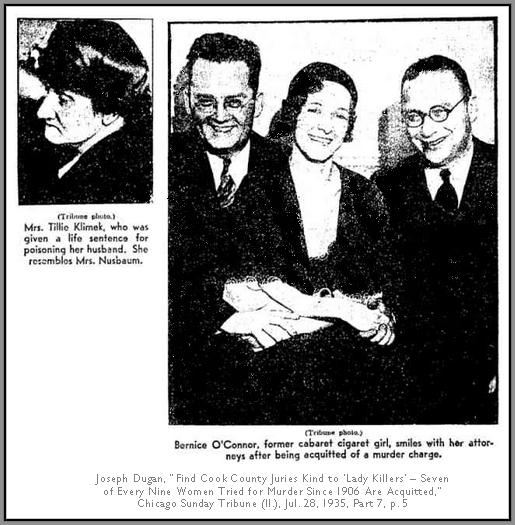 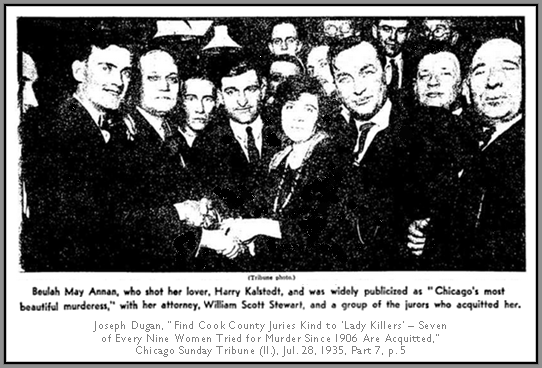