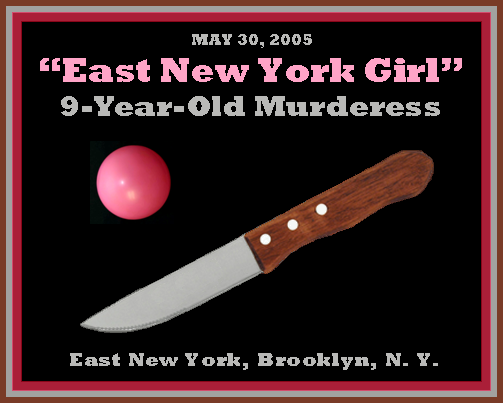 A 9-year-old girl from East New York (Borough of Brooklyn) stabbed her 11-year-old best friend, Queenie Washington, in the heart with a steak knife, killing her. The little murderess explained to police, reportedly with perfect calmness not knowing the attack had resulted in the child’s death, that “She kept hitting me, I told her to stop. . . . She wouldn’t leave me alone, so I went into the kitchen and picked up the knife and I stabbed her.”

The children had been fighting over the possession of a tiny ball, the diameter of a quarter. At one point the 9-year-old’s 15-year-old brother entered the room and broke up the fight. As soon as he left Queenie resumed punching the other girl on the arm. It was then that the 9-year-old ran to the kitchen, grabbed a steak knife off a counter, returned to Queenie and plunged the knife into her chest.

The victim stumbled out of her friend’s apartment and collapsed near the elevator and bled to death. Police found the knife, covered in blood, in the apartment.