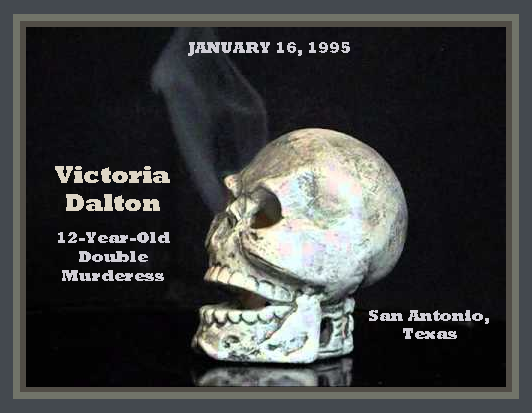 Victoria Dalton, a San Antonio, Texas girl obsessed with the macabre, acting as a babysitter for two children, Timothy and Renee Gutierrez, aged five months and two years, respectively, used her hand to smother each to death.

No motive could be cited  by investigators other than the girl’s obsession with gruesomeness.

The Galveston Daily News reported that prosecutor Juanita Vasquez-Gardner “portrayed the girl as a streetwise kid who was fascinated by horror. A few days before the killings, according to testimony, Dalton received a belated Christmas gift — a plastic replica of a human skull used for burning incense. Dalton named the skull “Pequena,” the nickname of Renee Gutierrez, and said she gave it the name because she wished the 2-year-old were dead.” “She loves anything that stands for Halloween – darkness, masks, scaring little children,” said the prosecutor.

On Nov. 10, 1995 a jury found the young murderess guilty and she was sentenced to “as many as 14 years in custody.” It was decided that at the age of 18 a determination would be made as to whether she had been rehabilitated.