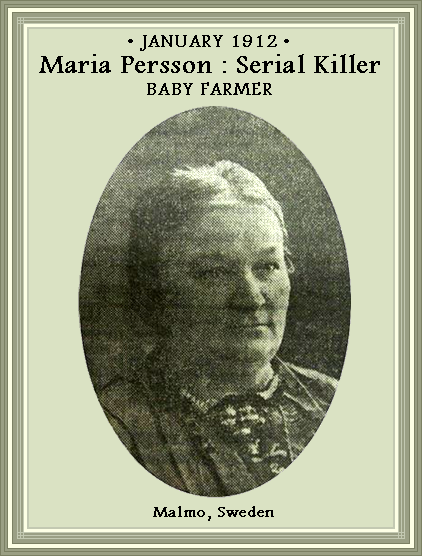 Maria Persson, a midwife and husband Anders Persson living in Malmo, Sweden were arrested in early 1912 after it was discovered that they had been in the practice of disposing of infants. Mr. Persson  was a foreman at a creosote plant and maintained the company’s boiler. It is thought that this is where the corpses of newborns were destroyed after having been delivered to the boiler room in a hand basket.

The midwife claimed that her husband sent coffins to a cemetery caretaker for burial, but caretaker denied other than having received small boxes of “immature fetuses, according to the midwife's certificate.”

An extensive investigation revealed that 73 children had gone missing. Twenty-one of them were determined to be dead. Only three were properly accounted for.

The prosecution of the couple lasted over two months, beginning March 29 and ending June 12, 1912. No homicide could be proved and the couple were convicted of minor charges and given a light sentence.

[Robert St. Esteph, based on a rather difficult to follow auto-translation of: “Åtskilliga spädbarn dog hos änglamakerskorna,” Sydsvenskan, Dec. 2, 2012]
http://www.sydsvenskan.se/malmo/atskilliga-spadbarn-dog-hos-anglamakerskorna/