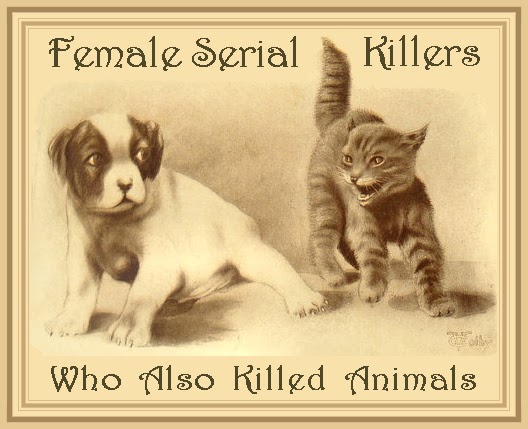 “The Marquise de Brinvilliers and Gaudin experimented upon dogs and then upon patients in hospitals, whom she sought under the guise of charity.” [source: article on 1897 Jager case, Hungary]

“Elizabeth Branch (1672–1740) and her daughter, Betty Branch, would torture small animals, apparently taking inspiration from stories of Nero. They would often beat and humiliate their servants, especially after the death of Benjamin in 1730, so that soon no local persons were willing to serve them.” [Wikipedia]

Honorine, aged ten, threw two young girls – each not much more than two years old – in a well on June 16 and 18, 1834. On the 20th she attempted to drown an eleven year old boy but was unsuccessful in her ploy. The justice of the peace first thought that they were accidents, but the community of Bas-Val suspected the girl, known for her cruelty to other children, whom she would torture by throwing dust in their eyes and then rubbing nettles into them. She also liked to strangle animals. Honorine eventually admitted she killed the two girls because they were said to be prettier than she. She delighted in seeing the suffering of family members of her victims.

Margarete Jäger (Jaeger, Joyer) murdered eight persons. “Professional men to whom she explained her diabolical process made an experiment with it upon a calf and a pig. These animals died with astonishing rapidity, and their bowels on examination presented no trace of poison.”

“Minor crimes, such its the poisoning of juvenile animals and the burning of numerous houses, are also said to be among the number of her achievements.”

“The four murders extended over a period of more than two years, and when, the bodies were exhumed and arsenic found in large quantities the woman merely expressed surprise that traces of the poison were discovered after so long a time. Before beginning her series of murders the poisoner made a number of experiments on animals, and even killed her own dog in order to observe the effect of arsenic.”

An “accidental” poisoning of a dog resulting from serial killer Agnes Orner’s preparation to poison a human victim: “Mrs. N. B. Larock testified that she lived at the same house as Mrs. Tyra at the time of Lilly’s death. She said that she went over to the Orner home shortly after the death of the child, and Mrs. Orner told her that Lillie had been taken suddenly sick and had died from some cause unknown to Mrs. Orner. She testified that J. D. Lea threw away some meat that had been on the table in the Orner home, and that her dog ate the meat and a few minutes thereafter the dog went into convulsions and died. She also testified that she had offered on Sunday to prepare a meal for Mrs. Orner and asked Mrs. Orner if she would like to have some of the meat which was on the table warmed over and served and Mrs. Orner said she did not care to eat any of it.”

At the trial of Chicago serial killer Louise Lindloff who was later convicted, prosecutors ordered two witnesses “to tell of experiments which Mrs. Lindloff is said to have conducted to test the effects of poisons in causing death and sickness, using animals as subjects.”

Mrs. Platts, caretaker of Alsa Thompson: “Between that time and now we were quite ill a number of times, but I didn’t become suspicious until about two weeks ago, when she asked me what would happen if she put some ant powder in the canary’s cage. I asked her why. ‘I wonder if they would die?’ she said. I told her they probably would. Next day she came to me and said: ‘O, Mrs. Platts, the canaries are sick! What do you suppose is the matter?’ I found they were drooping and I noticed ant powder around the bottom of the cage. Later, Alsa confessed she had placed the powder there and had expected the birds to die.”

In addition to poisoning the Platts’ canaries, Alsa and poisoned the family cat – and many humans.

Aunt Flora’s pet white cat played a vital, not to say a deathly, part in the drama of the revelation of her wickedness. The woman was given fly papers, told to prepare them for Mrs. Todorov. Then they let the cat drink the liquid. She died in agony.

Appropriately, France has called its latest murder sensation “The Poisonous Flirt” case. Central figure is an attractive widow, Marie Jeanbracq, 59, a brunette from the Pyrenees region. Police are holding her under suspicion of having murdered two husbands, her six-year-old daughter, an old man, and the wife of a wealthy man with whom she hoped to form a liasion. She is also alleged to have killed three dogs.

Farmers dilute [the poison] with water at a ratio of 20,000 to 1. Christa tested it by soaking a piece of bread in the clear, bitter-almond liquid. She put it in her dachshund’s milk and seconds later he died. She told neighbors she killed the dog because she couldn’t afford the taxes. Christa’s laboratory experience taught her that animals have a greater resistance to poison than humans so in September 1952 she slipped a few drops of E-605 in her husband’s milk.

“As a child, [Christine Falling] showed her ‘love’ for cats by strangling them and dropping them from lethal heights in order to ‘test their nine lives.’” [Michael Newton, Bad Girls Do It!, 1993, p. 70]