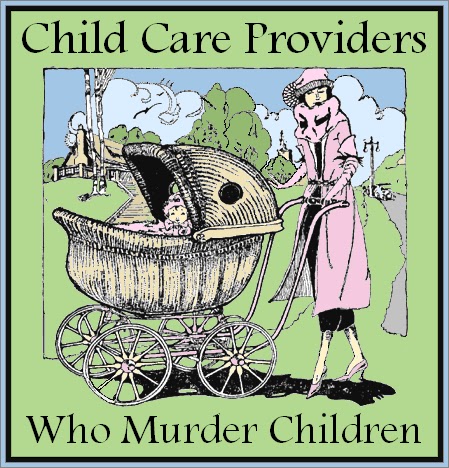 What does this subject – Child Care Providers Who Murder Children – have to do with misandry? A great deal actually.

First, present-day social engineers, whether they come from a corporate, government or leftist utopian perspective promote the politically correct agenda of “universal day care.” With so many fatherless children, an excellent thing for the controlling classes, the next step is parentless children – an ideal state of affairs for those who like Secretary of Treasury Robert Rubin who in 1998 gave this in answer in response to a question regarding the government’s plan to provide corporations with “a flexible and mobile workforce to which everyone contributes to the limits of their ability”: “federally subsidized day care.” In other words, a population of smaller, more easily reassigned,  family units which will the controlling interests the opportunity to engineer children to become the most obedient and profitable resources. 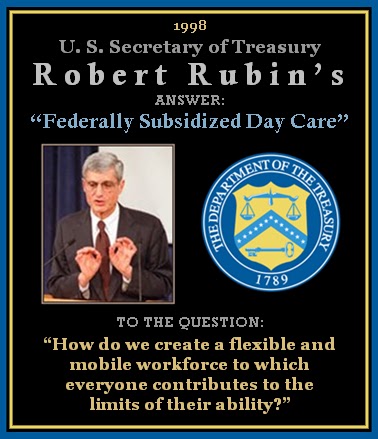 Second, the propagation of misandry depends upon constant propaganda emphasizing a wide  array of claimed shortcomings of men. One of the effective devices used to keep the message going is the repeated display and emphasis on representations of male criminals, images of sociopaths who can be, through incessant repetition reinforced by false generalizations, put forth a typical of what all men inherently “really are,” deep inside. For this tactic to work, however, news reports and other public representations of women who commit heinous crimes must generally be made to fit into two categories which do not dehumanize them. They must be seen as victims of circumstances (marriage, motherhood, poverty), insane and thus not responsible for their actions and therefore “victims” of a disease, or failing to fit one of these categories individual bad eggs who are, as the narrative would have it, “not like typical women.”

Another aspect of the propagation of the stereotype of evil maleness is the creation of a false historical narrative which employs the devices mentioned above. Thus, for the narrative to hold, it is necessary to keep information on female criminals to a manageable portion.

To counter this tactic of misandry it is valuable to put forth a more truthful and complete picture of female criminality. Female serial killers, a subject which has been researched by The Unknown History of Misandry, is one area in need of attention. The most complete study of the subject to have been published so far lists 140 of these criminals. UHoM has turned up an additional 220 (plus a number in another category: Black Widows who murdered two husbands). Among them are a large number of child care providers, most of them fitting the category which used to be termed “baby farmer,” referring to any person who took in children, usually infants, for payment.

Several baby farmers have found their way into the standard lists of female serial killers. All of them coming from Great Britain or the British Commonwealth. The reason for this restriction are due merely to accessibility of information. Little interest in, or funding for, the study of the subjects has ever existed, in stark contrast to the strong interest demonstrated in male serial killers.

The few baby farmers whose names are currently widely known were all sentenced to death and thus, since there has been for decades a great deal of interest in the subject of capital punishment plus an equal amount of interest in the treatment of female criminals in history, historians have scoured the capital punishment records – which are fairly easy of access, complete and of a manageable scale -- thoroughly. In the United States, however, despite many homicide investigations, indictments and trials of baby farmers, none were ever convicted of child murder (though some baby farmers in their capacity as abortionists were convicted for the deaths of mothers they had housed and operated upon). Deaths of children at the hands of baby farmers occurred in enormous numbers, however. UHoM has uncovered at least 60 cases of baby farmers reasonably suspected of having murdering children in newspaper reports dating from the 1860s through the 1940s. 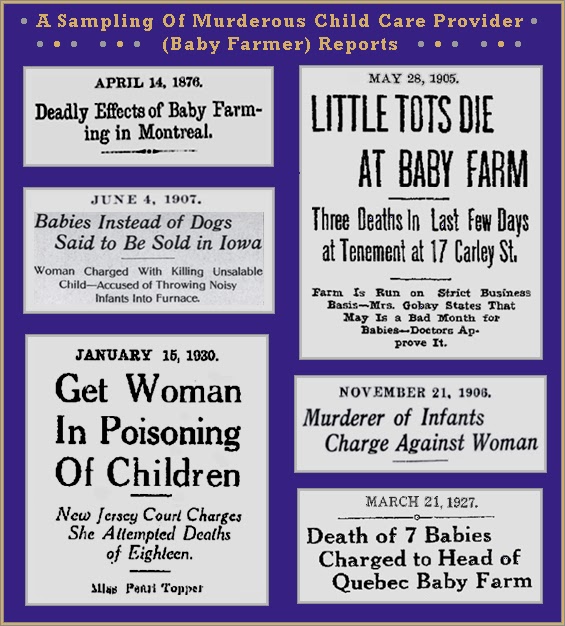 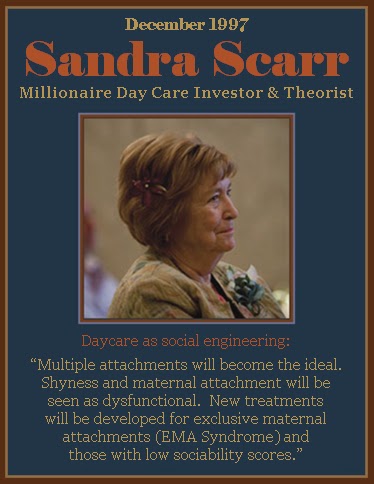 The most chillingly effective advocate of government child control may be Dr. Sandra Scarr, a high level proponent of behavior modification (former president of four organizations – Society for Research in Child Development, Association for Psychological Science, Council of Graduate Departments of Psychology, Behavior Genetics Association; former  Board of Directors member of American Psychological Association, founding member of the American Psychological Society), and major investor in the largest day care corporation in the world, Kinder Care (chief executive officer 1994-1997). Her influential utopian strategy is to manipulate the health profession to label infant’s maternal attachment and even their shyness as “dysfunctional” (mental illness which must be “treated” regardless of parents’ wishes). “Treatments would be developed to deal with this: drugs and Pavlovian conditioning (behavior modification based on fear). Any parent who would refuse to allow their baby to be treated would be deemed by Family Court to be unfit: they would have their child confiscated and sold into the foster care industry. She calls this Brave New World strategy, which is currently in its early stages, “New Century Children.”

William Norman Grigg warned  the public in 2002 of this anti-family scam: “Like most people who lust to restructure society, Scarr doesn't shy away from the prospect of forcing people to conform to her ideological blueprint. And like Brezhnev-era Soviet commissars, Scarr eagerly denounces opposition to the Brave New World she envisions as a form of illness. Since "being isolated at home with one adult and no peers" is socially harmful, it "should not be permitted," she contends. As the drive to create the rootless, socialized New Century Children continues, ‘Multiple attachments to others will become the ideal. Shyness and exclusive maternal attachment will be seen as dysfunctional. New treatments will be developed for children with exclusive maternal attachments (EMA syndrome) and those with low sociability scores.’” [William Norman Grigg, “New Century Children,” The New American, Sep. 8, 2002]

This post serves as an introduction. It will be some time before a large quantity of posts in this category will be made. While many baby farmers will be included in the posts, other types of cases will also appear: those involving foster care, nannies, and benevolent societies. Please check the LABELS sidebar category “Child Care Providers” from time to time to see news posts as they trickle in.