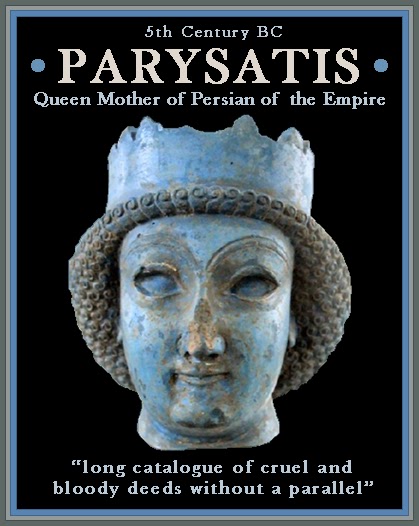 Parysatis was the 5th-century BC illegitimate daughter of Artaxerxes I, Emperor of Persia and Andia of Babylon.

EXCERPT: The court of Persia, during the reign of Artaxerxwes, was the scene of many crimes and atrocities, for the worst of which the queen-mother, Parysatis, was responsible. She had great power and influence over Antaxerxes. The long catalogue of her cruel and bloody deeds without a parallel even in the history of Oriental despotisms. Among her victims was the virtuous Queen Starira, whom she poisoned. The members of the royal household became the special objects of jealousy to each other, and executions, assassinations and suicides decimated the royal family. The king put to death his eldest son, Darius, whom he had appointed his successor, but who offended him by asking for Aspasia, one of the king’s concubines, and some say Darius conspired to kill the king.

[A. P. Spofford, et al., The Library of Historical Characters and Historic Characters and Famous Events of All Nations and All Ages, Volume VII, Art Library Publishing Co., 1904, p. 47]