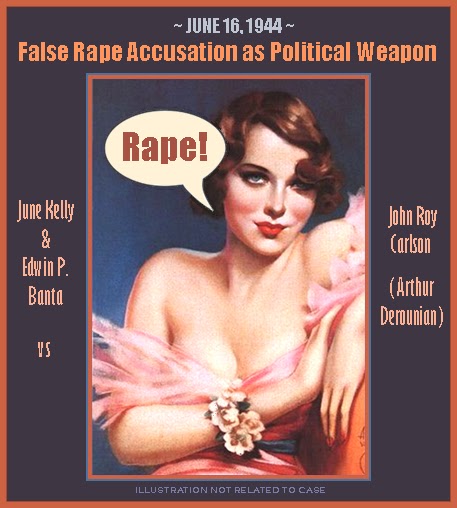 FULL TEXT (Article 1 of 3): New York, Aug. 4 – Edwin P. Banta, 75, was held in $1,900 bail for trial on Sept. 11 today on a charge of conspiring to have a false charge of attempted rape brought against Arthur Derounian, on the theory it would "blow that sedition trial in Washington sky-high."

According to District Attorney Frank S. Hogan Banta was a friend of George Sylvester Viereck, one of the defendants in the sedition case.

Derounian, who under the pen-name of John Roy Carlson, wrote the best-selling “Under Cover” has been a key witness for the prosecution.

Hogan charged that Banta, an orator for the German American Bund [U. S. organization formed by the German National Socialist Party, commonly known as the Nazis] when that organization was flourishing, posed as a violent anti-Nazi and recently succeeded in obtaining a job as investigator for the anti-Nazi league.

Banta's motive in taking that position, Hogan declared, was in the hope of aiding Viereck and other defendants in Washington. Banta enlisted June Kelly, 21, according to the district attorney, who said she was induced to bring a charge of attempted rape against Derounian.

When questioned, she admitted the charge was false. She was named as co-conspirator in the information on which Banta was arraigned yesterday but was not a defendant.

Banta denied the charge contending he was the victim of the Anti-Nazi league. 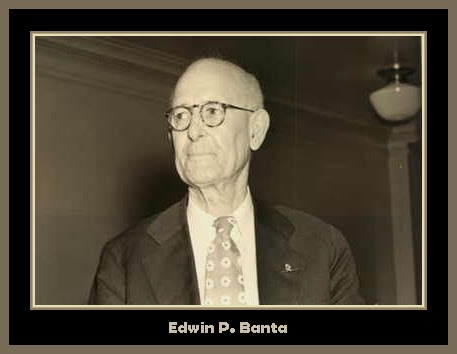 FULL TEXT (Article 2 of 3): New York, Oct. 18 – Special sessions court seeks today to learn the source of $1,000 which was promised red-haired June Kelly, 21, if she would accuse John Roy Carson [pseudonym of Arthur Derounian], author of “Under Cover,” of rape in an alleged conspiracy to “blow the Washington sedition trial to hell.”

Miss Kelly testified yesterday that Edwin P. Banta, 73, alleged master mind of the plot, told her he would “write to Rep. Fish (Hamilton Fish, R., N. Y.), Mr. Deatherage (George E. Deatherage, organizer of the Knights of the White Camelia) and a Mr. Robinett (of Chicago) about raising money.”

Carlson is to be a government witness in the trial of 29 alleged seditionists which has dragged for weeks in a federal court in Washington.

Miss Kelly testified that she had been Banta’s secretary, and that he visited her room the night of June 19. “I told him Carlson had been to see me and he got very excited. He said ‘I have a great idea. You see he raped you and we will blow the sedition trial at Washington all to hell.”

Banta told Miss Kelly he had informed New York’s police commissioner Lewis J. Valentine of Carlson’s “attack” on her, she said, and a deputy chief inspector called to hear her story, which she told while Banta sat in the bathroom of her apartment within earshot.

“Banta told me to tear my dress, scratch my arms and shed tears when I told my story to the inspector,” Miss Kelly testified. She said she refused tear her dress because it was new, but she did accuse Carlson, and later telephoned police to say the story was “a frameup instigated by Banta.” 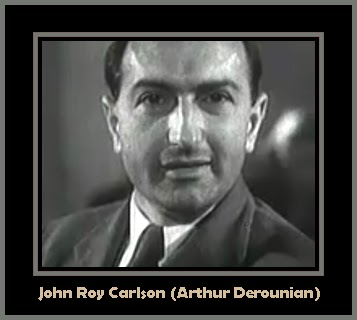 FULL TEXT (Article 3 of 3): New York, Oct. 23 – Edwin P. Banta, 73, was found guilty on a charge of conspiracy in an attempt to discredit Arthur Derounian, author of “Under Cover,” by asking a girl to falsely accuse the writer of raping her.

Presiding justice Irving Ben Cooper of Special Sessions announced sentence would be imposed Nov. 9 after “a full investigation of this defendant.”

Banta, faced with a maximum sentence of three years imprisonment, was accused of asking June Kelly, a pretty red-haired girl, to make the false accusation against Derounian, who wrote under the name John Roy Carlson, in order to “blow the seditionist trial in Washington all to hell.” 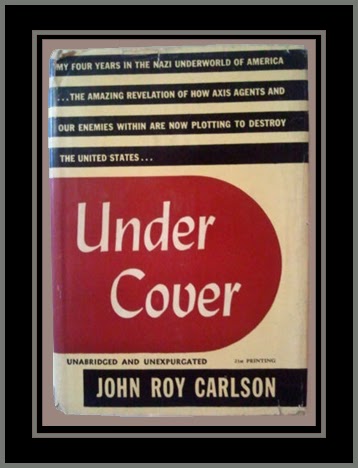