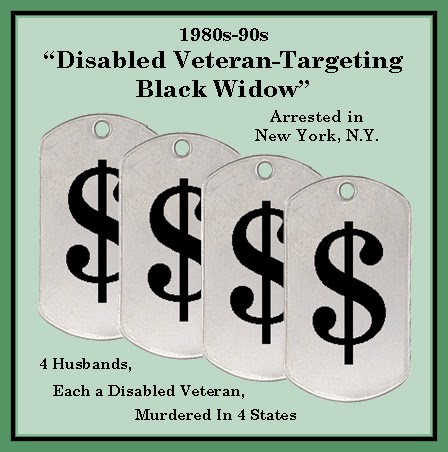 NOTE: At this time the case described below has not been identified. It is of great interest not only in that it represents a “champion black widow” case (4 or more husbands killed) but also for the fact that the killer targeted disabled veterans to exploit and murder. Based on the dates of the homicide detective’s career, the arrest following murder No. 4 would have occurred 1981-1995.

EXCERPT: Victor [O. Rice] is at a competitive disadvantage just now, because he has only been Norfolk State's police chief since Nov. 1, after applying for the job at his younger brother's suggestion. William has served on the ODU force since 1987, and as chief since 1991.

Victor spent most of his 25-year New York City police career as a homicide detective, the creme de la creme of investigators, while Williams rocketed into police administration. He served 21 years.

Victor was a patrolman till 1971, a plain clothes investigator till 1981, and a homicide detective till he retired this year [1995].

Victor solved the case of a New York woman who'd murdered four husbands, all disabled veterans, in different states. After the fourth murder, she told Victor her husband had been done in - slashed ear to ear - by one of three men who'd been drinking with him. Four half-filled glasses were on the table, but there were no wet marks on it. After Victor pointed out to the woman that each man could not have placed his glass in exactly the same spot time after time, she broke down and confessed.