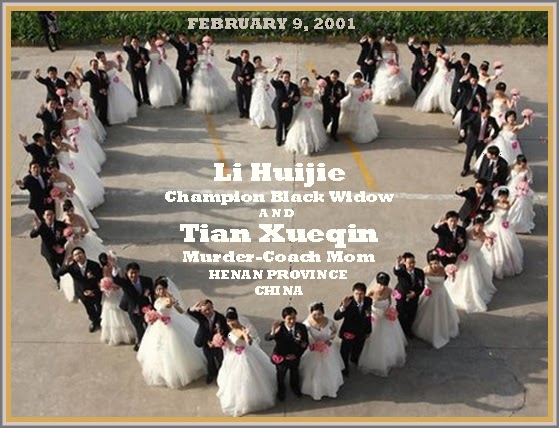 FULL TEXT (Article 1 of 2): Hong Kong – Chinese police have arrested a young woman on suspicion of murder after she was widowed for the fourth time in two years.

Li Huijie, from the central province of Henan, is accused of killing all her husbands on the orders of her mother, Tian Xueqin, for the "bride price" paid by rural grooms. Li and her mother were held when police were told that her last husband, Huang Zhiqiang, 25, died three days after his wedding from rat poison.

FULL TEXT (Article 2 of 2): Beijing. – Two Chinese women - a mother and a daughter - was arrested on a wedding-scam designed to grab up expensive wedding gifts, leading to the discovery of the suspicious deaths of four grooms.

Huijie Li and her mother, Tian Xuejin, were  arrested in Henan province, after four young men in the period of two years had been killed by with rat poison.

Suspicion took root after Li's last husband, Huang Zhigiang (25), died three days after their wedding on 21 January. An autopsy determined that he was killed by rat poison.

After police found a large quantity of rat poison in Tian's house got, Li admitted that she and her mother Huang killed the man she married.

Then it came to light that her last three husbands all too soon after their marriage died of poisoning.

Li's first marriage was in January 1999 with Huang Guofu.

After that she and Ma Fu Gualiang Xinhai married.

Each of these grooms brought large wedding gifts into Li’s possession.