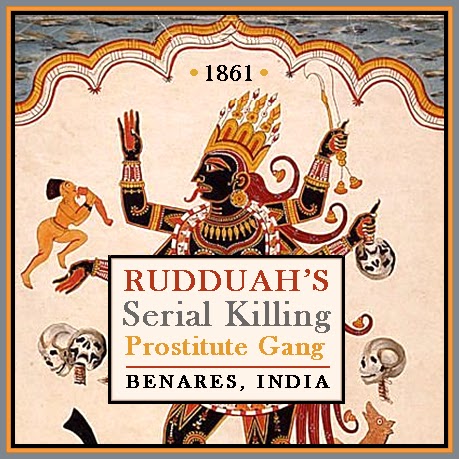 A group of prostitutes led by a woman named Ruddah was arrested, prosecuted, convicted and sentenced to death. Two of her girls, Bilassee, Parbuttee were also sentenced to death. Another prostitute in the ring Mussamut Soomerkee was given a lesser sentence. The prostitutes had been recruited by a professional poisoner, pseudo-Rajah Zalim Sing, to exploit their opportunities as prostitutes to poison their customers and rob them.

It was later found that technical errors were made in their trials, though the court did indeed find that the defendants were indeed professional poisoners.

Following are some excerpts from a long and complex account of the case:

EXCERPTS: The disclosure here made caused considerable excitement and horror in the city of Benares. ...

I now consider how far Captain Watson's enquiries lead to the belief of the existence, at a former period, of an organised gang under pseudo-Rajah Zalim Sing. Both Brij Bussia and Chowrassia (who was named by Brij Bussia) state that they were employed by Zalim Sing and his wife, known as the Ranee Lulloo, to commit robberies by the administration of dhatoora and khurreearee (the latter is, I believe, a preparation from the root of the Nerum odoratum or sweet-scented oleander, the medicinal properties of which are described in the new Indian Gardener as follows: The bark of the root and leaves externally applied are by native doctors considered repellants, the root taken internally being poisonous!) ...

Amongst the persons denounced by Brij Bussia were two women, Rudduah of Ramnuggur, and a servant of hers named Soomerkhee, a prostitute, "poisoners by trade." Subsequent enquiries proved that here again her story was true. Both were apprehended. In Rudduah's house a large quantity of dhatoora, khurreearee, arsenic, and other poisons were found, both in the raw and in a prepared state. Soomerkhee, on being apprehended, and on being confronted with Brij Bussia, made a clean confession of her crimes, declaring that Rudduah was the employer of Bilassee and Parbuttee, prostitutes, being in the Dal Hurdoee Mohullah, who destroyed by poison those decoyed into the brothel and then plundered their property.

[Selections from the Records of the Government of India, Home Revenue And Agricultural Department. No. CLXVII. Papers Relating To The Crime Of Robbery By Poisoning. Calcutta: Office Of The Superintendent Of Government Printing. 1880]