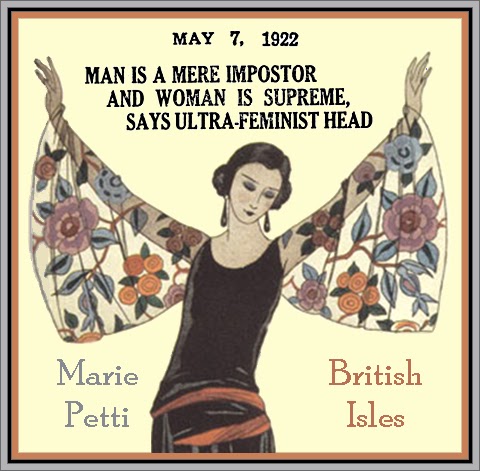 FULL TEXT (Article 1 of 2): London, May 6. – “Man is but one of a million humble fertilizers. Nature intended woman to reign supreme.”

Marie Petti, leader of a secret ultra-feminist movement that has sprung up throughout the British Isles, today voiced this slogan of the new organization.

Although still clandestine, the organization is reported to have gained tremendously in membership and influence since first it was promulgated a month ago. It aims to restore womankind to its “rightful place.”

Miss Petti was asked by the United Press to state the beliefs on which her movement is based.

“Modern man,” she replied, “in his pose of superiority, is but a mere contemptible imposter, who must be subdued. Woman’s superiority has been scientifically established.

“At the beginning of organic life, woman created man, and ruled him. He was a parasite, and a slave.”

“At best, man is but an afterthought of nature.”

At secret meetings of the new movement, a charter, based on data from the days before woman fell, is being drawn up, Miss Petti declared. She said at these meetings, any mention of the word man or anything masculine was hissed. 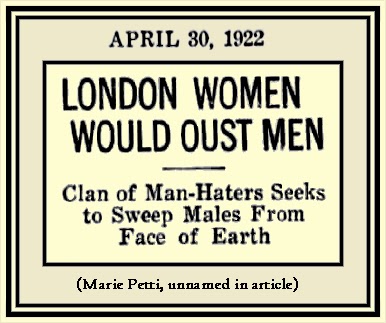 London. – Mere man is about to be swept off the face of the earth if “ultra-feminists” have their way, Elliott O’Donnell, author and investigator of distinction, informs the International News Service.

The tenets of the ”ultra-feminists” who are organized to unthrone man, are, according to O’Donnell, as follows:

“In the beginning there was only one sex, the feminine – man was a mistake, a mere afterthought.”

“There is no need for any sex other than the feminine.”

“Love between the sexes is only weakness, temporary madness.”

“Parthenogenesis or virgin birth proves the oneness at the substance out of which all things are made.” 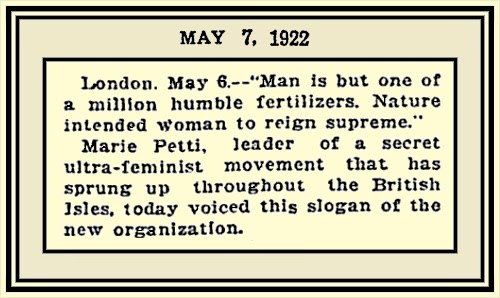 LONDON – A feminine war against the male sex is well under way to Great Britain, according to Elliott O’Donnell English author and investigator.

O’Donnell, who is the author of more than 30 books on psychic matters and who has established a reputation run an Investigator of haunted houses, is Irish by birth but in reality an American product, for his family nettled in Baltimore more than a century ago, and ho spent the early days of his youth on a ranch in Oregon.

For many years O’Donnell has been looked upon as one of the leaders of those who are trying to lay the truth about things supernatural before the public. His adventure in investigating ghost stories and haunted places are widely read in England, but now he has given up his investigations of things supernatural to take up the investigation of the efforts of certain ultra-feminists to bring about the downfall of man.

This English investigator informed the International News Service that he is in possession of absolute evidence that “ultra-feminists” are laying plans for a sex war in England, and he has no doubt that their organization extends to the United States.

“I am not making a hostile attack on women,” O’Donnell said. “For women, as women, I have always had the greatest respect and admiration. I have always held that it is only fair and right that women should enjoy the same privileges, an a advantages as men.”

“I am convinced, however, from my investigations that the cult of man-hating is being fostered by a very definite organization in London.”

“Secret meetings, from which men are rigidly banned, are being held repeatedly, and the doctrine of male hatred is subtly but vigorously propounded.”

“The chief aims and objects of the movement are in the field of politics and economics.”

“The ultra-feminists are particularly anxious to gain control over the police.”

“If the cult of man-hating goes on increasing until it gains ascendency, even were it possible to propagate the race without the assistance of the male, the end of the world would be assured.”

“In the past history of the human race sex hate and antagonisms have been the prelude to great national catastrophes, and I venture to suggest that this nation would take heed lest a like fate befall it. There is nothing constructive in ultra feminism; it is destructive from start to finish.”

O’Donnell declared that the are of three types, as follows:

1. The type that apes the masculine.

2. The anaemic, fretful type of woman.

Dissemination of the cult of the “ultra-feminists” is being accomplished by propaganda, O’Donnell charges. 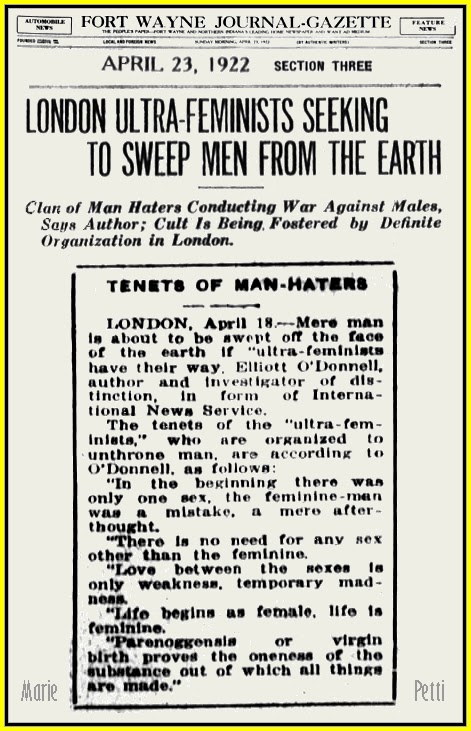