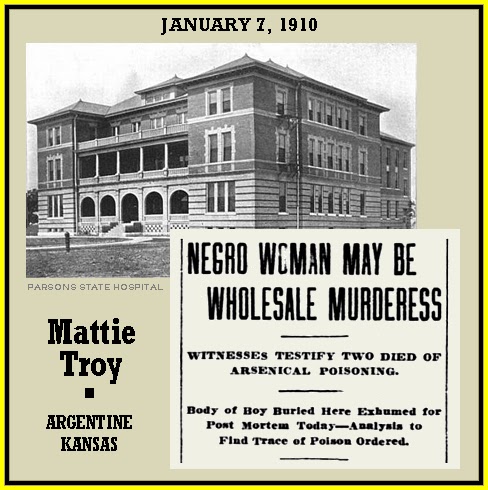 FULL TEXT (Article 1 of 3): As a result of the beginning of a coroner's inquest yesterday morning the body of a negro boy, who is said to have died here mysteriously two months ago, was exhumed last night and an effort will be made to identity it today as that of Harry Marshall of Kansas City, Mo. At the time the boy died a woman, who claimed to be his stepmother, held here under a charge of illegally collecting life insurance, asserted his name was Willard D. Troy. After the insurance had been collected agents for the Metropolitan Life Insurance company, in which the real Willard Troy was insured, discovered the living boy and swore to a complaint charging obtaining money under false pretenses.

Since the beginning of the inquiry it is believed the boy was murdered and that the woman, Mattie Troy alias Mary Troy alias Mary Troy Thomas, who claimed to have been his stepmother, is the murderess. The inquiry has developed several other things that may prove the woman to be a second Mrs. Gunness of Laporte, Ind., fame. It was asserted yesterday, during the course of the hearing, that another child, Jessie Watson, died while insured in the favor of the Troy woman in a manner strongly suggesting arsenical poisoning and that the woman’s husband died last summer, also mysteriously and also insured. The little girl is said to have died at 612 Holmes street, Kansas City, April 24, 1909, after a short illness. A Dr. Uthank, who attended her, told Walter Fearn, an agent for the Metropolitan Life Insurance company, so the latter testified, that there were all the symptoms of arsenical poisoning in the death and that he had notified the Kansas city authorities, but a delay made it too late to hold a post mortem and the matter was dropped.

The husband is said to have died last July. Willard Troy, or rather Harry Marshall, as the boy is believed to have been, died in Topeka November 6, 1909, and was buried by Stone street & Hamilton the following day. In addition to the three deaths mentioned in particular, it was asserted that there have been others, perhaps half a dozen more, and in each case the victim has carried insurance, making a chain of suspicious circumstances that the officers believe may mean that the woman is a wholesale murderess.

Mattie Troy was arrested at the home of her husband, an Argentine ragman, at 230 Maple  street, Argentine, Wednesday night, and was brought here Thursday morning. Upon being taken to the county jail she began praying at the top of her voice, asking the Lord to have mercy on her for what she had done. An investigation of her belongings showed that she had quite a stock of arsenic in her trunk, corroborating the strong suspicion that it was arsenical poisoning that caused the deaths.

The Troy woman came to Topeka, so Mrs. Robert Washam testified, October 28 and stopped at the Washam hotel, 116 East Seventh avenue. The night she arrived two children she had with her, a boy and a girl, both were in good spirits. The next day, however, the boy took sick and remained so until November when he died. A picture purporting to be that of the dead boy was identified yesterday by Eva Baker, an aunt of Harry Marshall, who has been missing since he was persuaded to accompany the Troy woman, as her nephew, and it was identified by Undertaker Hamilton as that of the body he buried November 7.

Alter having secured ample evidence to warrant exhuming the dead body of the boy County Attorney Schenck called a halt and suggested that the next step would be to exhume the body, have it identified if possible, and then proceed with a post mortem and an analysis of the contents of the stomach to determine whether or not there are traces of poison. This was ordered done, the jury being adjourned until 10 o'clock this morning, when it will meet Dr. H. H. Keith, county coroner, at the Stone street & Hamilton undertaking parlors to view the exhumed remains. At that time also the aunt of Harry Marshall will be present to identify the body if, as is expected, it is that of Harry Marshall.

FULL TEXT (Article 2 of 3): Mattie Troy, alias Mary Thomas, charged with obtaining money under false pretenses in that she collected insurance on the life of a boy who was not dead, and charged also with murder in the first degree in connection with the death of David Marshall, here November 6, waived preliminary hearing In both cases before Judge Ernest R. Simon in the court of Topeka yesterday and was bound over to the district court in the sum of $500 and $7,000 in the two cases respectively.

It was asserted late yesterday afternoon that arrangements probably will be made to try the woman some time during the present term of the district court in which case, in case she is convicted as the officers feel sure she will be, she will be taken to Lansing with other convicts later in the term.

Mattie Troy, alias Mary Thomas, wife of an Argentine, Kan., rag man, is alleged to have given David Marshall, whom she “borrowed” in Kansas City for the purpose, arsenic here to kill him. After his death she claimed insurance for David Troy, her step-son, swearing that the dead boy was David Troy. The finding of the living David Troy aroused the suspicions of the Metropolitan Life Insurance company’s agents, in which the boy was insured, and shortly afterward a complaint was sworn to charging the woman with obtaining money under false pretenses in that she collected insurance on the life of a boy who was not dead, The question of the identity of the boy who did die soon was cleared up and a chemical analysis of the boy’s stomach showed traces of arsenic, strengthening the belief that the Marshall boy was murdered.

FULL TEXT (Article 3 of 3): Mattie Troy, alias Mary Thomas, wanted for the  murder in the first degree in connection with the death of a child here shells alleged to have murdered in order to collect insurance carried on his life, escaped from the state hospital yesterday morning about 7 o’clock, an although she was hunted high and low all day yesterday, scarcely any trace of her could be found. The woman acted unbalanced at the county jail where she was waiting for trial, and finally was taken before a commission in lunacy. In the local probate court and was adjudged insane, At the time of her commitment to the state hospital it was asserted that she was failing so fast in jail it was feared she would not live a week. Since being at the hospital, however, Dr. T. C. Biddle reports that she has been gaining both physically and mentally, and almost has regained her normal weight of about 300 pounds.

Just how she escaped is something of a mystery. She was confined in a cottage on the grounds. Dr. Biddle says, and she was there all right early yesterday morning. After breakfast she was missed, and a search revealed her departure. Later a street car conductor on the asylum line told the hunters that he had taken a woman to town, a colored woman who was large and heavy, and she answered the description well enough that it is deemed probable she was Mattie Troy.

The woman was arrested nearly a year ago charged with the murder of a boy here in Topeka. An investigation following the death of the child on the part of adjusters for the Metropolitan Life Insurance company, in which the boy’s life was insured, showed that the boy who was dead was not the one on whom insurance was carried. The body of the boy who died immediately was ordered exhumed, and a chemical analysis showed arsenic in good sized quantities in vital organs. The woman is alleged to nave poisoned several other persons. In- eluding at least alleged murder here.

Dr. Biddle believes that his patient will be recovered in a day or two at most, declaring that he is going to keep after her until he gets her. He believes she is in the city, and therefore within reach.

[“Mattie Troy Escapes From State Hospital - Was Charged With Murder Of Boy Nearly A Year Ago But Was Found Insane -  Believed She Came to City on Street Car and That She Is In Hiding Somewhere In Topeka.” The Topeka Daily Capital (Ka.), Jan. 3, 1911, p. 6]

“In addition to the three deaths mentioned in particular, it was asserted that there have been others, perhaps half a dozen more.”