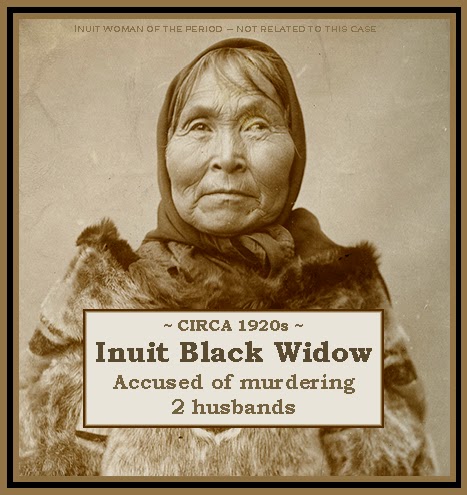 EXCERPT: In another telling story, Grace O’Kelly described an Inuit woman being held at the police barracks with a male and female accomplice who had aided her in strangling two previous husbands. She was an old woman, remarked Mrs O’Kelly, who had eluded capture by making doglike tracks in the snow. Mrs Kelly was impressed by this clever manoeuvre, and intrigued by the third husband who “seemed mot devoted and could be found sitting in their tent with his arm around his lady love, or holding her hand as he walked.” It is not clear if the Inuit woman murdered her first two husbands so she could marry the third, although it is apparent that Mrs O’Kelly believed that to be the case and that she was more envious than damning of the woman. She also noted that this behavior was the only form of lovemaking she had “witnessed among the stolid, and apparently unresponsive natives of these coasts.”

Note: Ms. Kelcy refers to the question of whether the suspect “murdered her first two husbands so she could marry the third.” This phrasing implies that somehow the murder of no. 1 would be connected to her aim to marry no. 3, yet there is no explanation of this peculiar set of circumstances. The answer to the conundrum will likely be found in the original 1924 source, not a present accessible to us.