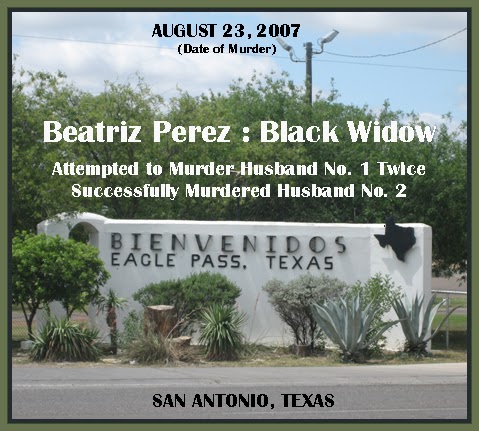 FULL TEXT (Article 1 of 2): Four years ago, Beatriz Perez received probation when she admitted to trying to kill her husband with a poisoned sandwich after accusing him of having an affair.

On Wednesday, the 49-year-old woman sat in a Bexar County courtroom again - this time accused of bludgeoning to death a new husband.

Perez, who had been served with divorce papers two days earlier, left town later that afternoon, witnesses said. She wasn't seen again until four weeks later, when she was arrested crossing the border into Eagle Pass, prosecutor Michael De Leon told jurors during opening statements in her murder trial.

"Instead of going to her husband's funeral, Beatriz Perez packed up everything and moved to Mexico on the day of the murder," De Leon said, pointing out that a strand of her hair was found on Abitu's body.

Also on Wednesday, prosecutors displayed on the courtroom wall a large photo of Abitu's blood-smeared left hand, where investigators said they found a long, wavy hair traced to Perez.

Lawyers for Perez countered that the hair was inconsequential. Although the couple had been separated since February 2007, two months after they were married, they still had feelings for each other and often visited, defense attorney Jay Norton said.

"Reason and common sense will show you a lot of the state's case is built upon assumption - a house of cards," Norton said. "This really quite honestly is a sloppy investigation."

Attorneys didn't mention Perez's previous conviction to the jury of eight women and four men. Perez told police in 2003 that she put eight pills of Ativan, a sedative, in a tuna sandwich she made for Jose Perez. They had been married for 22 years and had three children.

Two years before that incident, she had tried the same scheme using fewer pills, but all it did was make her husband sleepy, she told police.

Outside the courtroom Wednesday, defense attorney Alan Brown said the old case and the current one are completely different.

"This is head trauma, a violent act," he said. "Our thinking is that it's so much different from (the 2003 case) that it shows she's innocent of this."

FULL TEXT (Article 2 of 2): Jurors returned a guilty verdict Monday in the trial of a San Antonio woman whose 73-year-old husband was found beaten to death two days after she was served with divorce papers.

It wasn't until after the punishment phase of Beatriz Perez's murder trial began that the panel learned that the 49-year-old defendant was already on probation for aggravated assault - having admitted to police in 2005 that she twice tried to poison a previous husband.

Perez could face up to life in prison for the death of Juan Abitu, a Green Beret and Vietnam veteran described by relatives as the rock that held their family together.

Closing arguments for the punishment hearing are expected this morning in the 226th District Court.

Defense attorneys described Perez during the weeklong trial as someone who was prone to anxiety - so much so that it wasn't surprising she fled to a family home in Piedras Negras, Mexico, immediately after discovering her husband's body while peering through the locked screen door of his Monticello Park apartment on the morning of Aug. 23, 2007.

Perez was apprehended a month later as she crossed the border into Eagle Pass.

"I looked up and I saw a lot of blood - too much blood," Perez told jurors through an interpreter while on the witness stand Friday. "I was very, very scared. I just hadn't seen something like that ever."

She said she didn't know who killed her husband but feared the assailant might be after her, too. The two were still in love, Perez said, adding that the divorce had been planned as a way to appease her children, who didn't get along with Abitu.

"Burglaries are rampant throughout this city," Brown said. "I don't know what happened here. But I really don't believe this woman - 4 foot 11 - did that to this Green Beret."

But Perez worked construction, prosecutor Michael De Leon later countered. He pointed to testimony from a deputy medical examiner that anybody could have inflicted such wounds, given the right instrument. A murder weapon was never recovered.

If it was a burglary, he said, it seems odd that Abitu's gold watch, ring, car keys and a couple hundred dollars in cash were left on his body. Perez was the only person with a motive, and her actions spoke louder than words that day, De Leon told jurors.

"If your husband, or your wife, is lying on the floor in a pool of blood ... any decent human being is going to call for help," he said. "You don't bolt for the border." 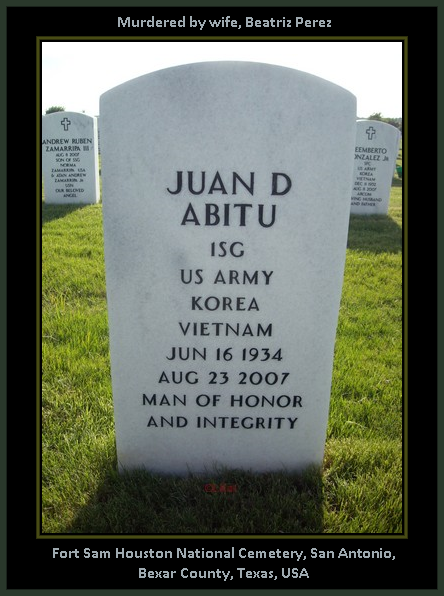