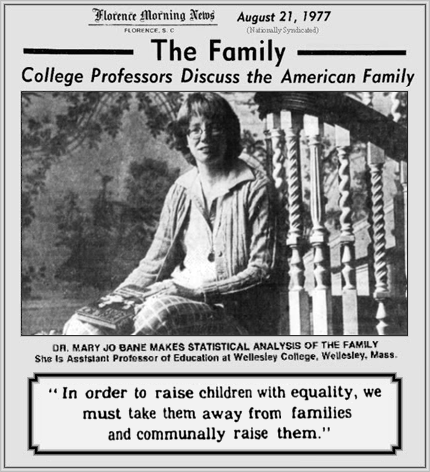 Mary Jo Bane became Commissioner of the New York State Department of Social Services prior to her appointment with the administration. In 1993, President Clinton appointed her Assistant secretary of Health and Human Services (HSS) for Families and Children.

The American family was dying, many of the experts declared.

Many, but not Mary Jo Bane. To her, the notion of the family falling apart was fairy tale.

Dr. Bane, 34, an assistant professor of education at Wellsley College and associate director of the school’s Center for Research on Women, concluded after careful statistical analysis the family was far from dead - surviving and, in fact, healthy. She stated her case in a book, “Here to Stay: American Families in the Twentieth Century.” Dr Bane, after consideration, took issue with a number of widely held beliefs, like the notion Americans in the past drew strength from the extended family – two or more generations living happily and productively under one roof.

In the 18th and 19th Centuries, she said, only six per cent of the country's households contained more than one generation. In 1970 about 7.5 per cent of America's families included relatives other than parents and children in the same home. She opposed, too, the suggestion that a declining birth rate indicates disintegration of the family.

“Some people aren’t going to have any children,” she said. “Some put it off. Some aren't having as many I don't really see any widespread childlessness. People are having their
first child later.”

“Yes. we're just coming out of a period of low birth rate, she said. "But we're comparing it to the so-called baby boom of the previous period.”

“Baby boom babies were contraceptive mistakes, when people have the first baby later, they're more effective users of birth control, because they used it so well before having the Dr Bane was interviewed recently in her office on the Wellsley campus. There, in the renovated country estate that is home for the Center for Research on Women, she discussed her findings and offered more support for her conclusion that today's family is a healthy one.

“Families are among our most conservative institutions,” she said. “But when people begin talking about the Family, that’s obviously changing.”

“I tried to separate out and think more specifically about family relationships in my work,” she said. “I looked at the data that illuminated bonds between people. People are continuing to have children and keep children with them after a disruption.”

Years ago, she said, mothers probably did not spend as much time with their children as today's working mother. In the past, she reasoned, women had more work to do around the house with more children and fewer time-saving devices. Working mothers today, Dr. Bane said, often are criticized as bad parents because they are not home with their children. Working fathers, on the other hand, aren't subject to the same rebuke.

“What happens to children depends not only on what happens in the homes, but what happens in the outside world,” she said. "We really don't know how to raise children. If we want to talk about equality of opportunity for children, then the fact that children are raised in families means there's no equality.

“It’s a dilemma. In order to raise children with equality, we must take them away from families and communally raise them.”

“There is no evidence.” Dr. Bane said, “that having a working mother per se has harmful effects on children.” Citing studies in Syracuse and Boston in 1968 and 1973, she said there is evidence many working mothers set aside time exclusively for their children.

“They probably read more to their children and spend more time in planned activities with them than nonworking mothers,” she said.

Those who contend the family is breaking apart also maintain increased mobility has caused fragmentation and isolation. Government statistics, she said in rejecting that notion, show about 20 per cent of the population moved each year in the 1970s. Only four per cent moved to other states. And most of those who moved, she said, were the young and the unmarried.

“If mobility is destroying community and social life in America,” she concluded, “it has been doing so for a long time.”

As for divorce, Dr. Bane said she sees it as a “safety valve” for families. “It makes for better family life,” she said.

“There's no merit in holding families together just for the sake of it. For this reason, divorce improves the quality of marriages.”

And most divorced people remarry, she said. “In general, the remarriage rate has kept pace with the divorce rate, suggesting that it is not marriage itself but the specific marital partner that is rejected.”

Email ThisBlogThis!Share to TwitterShare to FacebookShare to Pinterest
Labels: Anti-Family