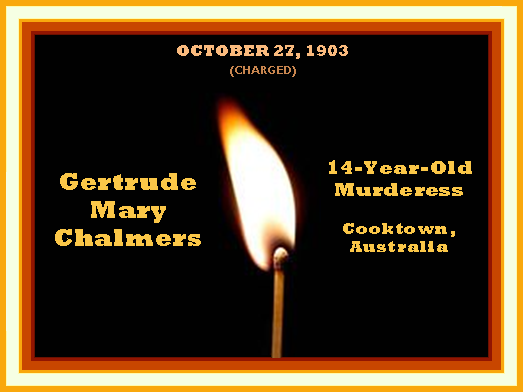 FULL TEXT: The Commissioner of Police has received a telegram stating that at the Circuit Court at Cooktown on Friday a girl named Gertrude Mary Chalmers, aged 14 1/2  years who was charged with the murder of her niece, a girl of 4 years, was ordered to be sent to the Brisbane reception house, to be dealt with as a lunatic.

The accused was living with her marries sister, Mrs Walter Nelson as a nurse girl Mrs Nelson left for Cairns leaving her mother in law in charge of the house and the children. The nursegirl left the house one day in charge of the little girl Mrs. Chalmers, and they went to a vacant allotment to play with other children. The little girl sat down, and the other, picking up a pill box with one match in it struck the match and threw it lighted into the lap of the little girl, whose clothes immediately caught fire. The child jumped up and screamed, her clothes blazing. The girl, Gertrude, stood about two yards away and rendered no assistance whatever till a neighbour, Mrs Borland, hearing the screaming ran out to the child's assistance, and put the flames out. The little child subsequently died.

The girl Gertrude told the doctor that she was glad the little girl was dead. She also admitted to the sergeant that she set her to the child because she would not play with her. She also said that when she saw the flames she was going to spit on them but did not do so.

The girl was known to the neighbours as a simpleton. When the police went to arrest her they found her in bed suffering from the measles.