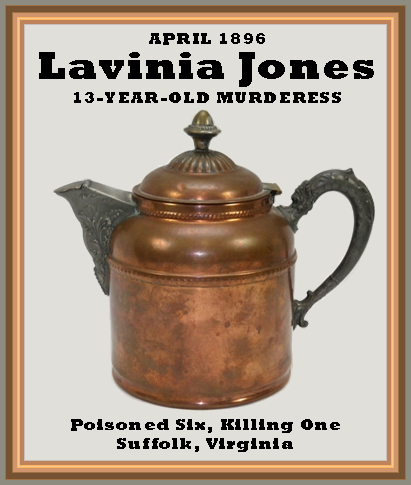 FULL TEXT: Suffolk, Va., April 10 – Lavinia Jones, aged 12 years, was to day committed to jail charged with a second attempt to poison F. L. Holland’s family at Elwood. At first she drugged the coffee with arsenic, from the effects of which one person died and four were made ill. Failing to kill the victim intended, she put “rough on rats” in milk, which was ejected by the first person who tasted it. Investigations pointed to the guilt of the girl, who, at a preliminary hearing today, was sent on to the grand jury. It is questioned whether Lavinia acted on her own responsibility or in the capacity of agent. She is a domestic.

FULL TEXT: To-day, in the Nansemond County Court, Lavinia Jones (colored), aged 12 years, was indicted for the poisoning of a family near Elwood.

FULL TEXT: At Suffolk yesterday evening Lavinia Jones, aged 13 years, was sentenced to five years’ imprisonment for poisoning F. L. Hollands’ family last April. She placed rough on rats in the coffee, after drinking which one person died and five others were made violently ill. Lavinia heard the sentence pronounced without tremor and appeared to only feebly comprehend its purport.