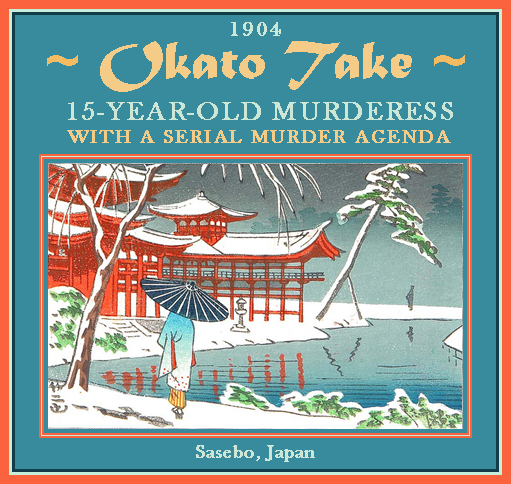 Okato Take (15) planned to murder four children but failed in two attempts, succeeding in only one.

FULL TEXT: Startling facts in regard to Japanese war superstitions are given in a letter from J. Gordon Smith, the Tokio correspondent of the “Liverpool Courier.” He says:

In the temple gate at Asakusa. where the fierce-looking Nio—the two Deva kings Indra and Brahma — stand sentinel behind their rusted iron grating to frighten demons from the entrance to the Temple of the thousand-headed, thousand-armed Kwannon and the lesser gods housed with the God of Mercy. I was yesterday brought into contact once again with the superstitions of these people of Japan. The war has brought to light many interesting superstitions, and that of the women who sew a thousand I stitches and breathe a thousand prayers as each pair of hands works a thread into a waistband that is to guard a soldier from all harm is not the least interesting. Daily, in the gateway of Kwannon at Asakusa, hundreds of women gather to

who pass to beseech each one girl and woman to add a stitch to the waistband that is to be the talisman for a loved one. In the early morning, when the high gate, dull, red and ponderous, with its galleries and superimposed beam-work, pretty with its truly Buddhistic architectural effect, is throwing long shadows down the narrow lane of bazaars, the women gather in the pale beneath the massive paper lanterns which sway in the morning breeze and seem to murmur as the pendant charms strain with the gentle swing. Some have brought new strips of cotton, fresh from one of the booths near by, others have waistbands that need but a few more stitches to become a talisman, a charm to guard a soldier from all the perils by field and flood. All day, without ceasing, the women call to women, to friends, and even to total strangers, beseeching every one of their sex to sew a thread and to offer a prayer to whatever gods they will – the Gods of the Way that travel from the Light hidden beyond myriads of existences and the Gods of the Path, the Shinto Gods who once were humans – that a loved one might be free from harm. In order that the charm may be complete there must be a thousand prayers from a thousand different women, as each sews one of a thousand stitches.

With the armies of Japan now in the field there are thousands of soldiers who wear these waistbands, and each band of cloth has been fingered by a thousand different women, each of whom has breathed a prayer for the wearer, though few of those who sewed and prayed had ever seen him, or even heard his name. Really there is nothing mysterious about these waistbands; the material is of the commonest, a plain strip of white cotton and the commonest of thread, both the products of some British factory. It is the sewing by the thousand different women, the mumbling of the many prayers to the many gods of the people that work the charm, and makes the product of a Lancashire mill the talisman which the mothers, wives and daughters of Japan believe will turn the foemen’s bullets and protect the soldier from all the perils that threaten.

It is a pretty ceremony, this of the thousand stitches. That of which I tell now is not. It deals with superstition – and crime. At Saebo, which is the Portsmouth of Japan, lives O Kato Take, a girl of fifteen years of age, whose brother is a gunner on the battleship Mikasa, flagship of Admiral Togo. When the Mikasa and her contorts sailed from Sasebo in the 5th of February to make war on Russian vessels the sailor wore a waistband such as those the women make at Asakusa, which O Kato Take, his sister, had secured for him, and he carried a little stone Buddha over which the prayers of a whole family had been said. He had talismans galore, but O Kato Take was still fearful of her brother. She visited many temples at Sasebo, rang gongs and beat the brass at main shrines. and called to many gods, her prayers being ever for her brother’s safety.

At the Temple of Amida, in a grove lined with lanterns of age-worn clay, she met O Shimizu Osho, a woman of twenty-two years of age, who had come to pray for the safe return of a lover. The girl and woman told each other of their hopes and fears as they shuffled over the paving of the temple courtyard, and then the young girl, who was both ignorant and superstitious, was told by Osho San that if four children were thrown into wells for the sake of one soldier at the front the gods would guard that soldier, and he would surely come home safely. The girl believed the tale, and when she returned home she thought and thought as she sang – she loved to sing and accompany herself on the sainisen. The burden of her thoughts was to secure the safety of her brother – even at the expense of four young lives, and she decided to drown four children for the sake of the sailor.

~ THE ILLS OF SUPERSTITION ~

Her first, victim, or rather intended victim, was a seven-year-old girl named Tsuku-hi Sade. She met the child in Shimanose-machi, a street of Sasebo, and coaxing the little one toward a well – every Japanese village, town, or city has hundreds of roadside wells – she seized the little girl suddenly and hurled her into the well. That was on the 12th of February. Fortunately, the cries of the child, who, had caught the bucket rope as she fell, were heard by the owner of the well, and he succeeded in rescuing her. Meanwhile the sailor’s sister, affrighted, was in hiding, fearing discovery and punishment for her crime, soon became emboldened again, however – perhaps her great love for her brother overcame her fears – and on the 4th of March she met a little boy, four years of age, Kiyoshi by name, playing near a well in Yahata-machu, Sasebo. The little fellow was strutting about attired in a military cap and wearing miniature haversack and kit such as that the Japanese soldiers have – the bazaars sell hundreds of similar toys daily to parents for boys, of their families. He was “playing soldier” after the manner of the majority of the tots of Japan in these warlike days. Perhaps it was his toy-like equipment of haversack and pouches, blanket and cartridge boxes, which brought the murderous thoughts to the mind of O Kato Take. However that may be, she grasped the little fellow, carried him to a well near by, and threw him into the water. Then she fled as the child drowned.

Six weeks elapsed before the superstitious O Kato Take sought another victim for her sacrificial crimes. On May 19th she tried to drown Uchida Suga, a girl of seven years of age. The girl was standing in front of a chemist’s shop – the shops of this land are all open-fronted – and the older girl came to her with a request that O Uchida Suga should assist her to draw water from a well close at hand. The little girl was about to comply, and walked with O Kato Take toward the well with stone wall and balancing bamboo pole high in the air above the stone. As the child did so the elder girl pounced on her, and, seizing her by the shoulders of her kimona, pushed her into the well, after robbing her of five sen. Some passers-by heard the cries of the unfortunate child, and they rescued her. The deluded murderess fled. Her crimes remained undiscovered until mid-June. They might never have been known to the public but for the remorse which seized her and caused her to go to the police-box by the roadside at Sasebo, sobbing bitterly, to tell of her crimes. She told the whole tale of superstition to the police, who wrote it on the records. Then they arrested Osho, who had told the fifteen-year-old murderess that four children drowned in wells would protect a soldier at the front, and both women are held to await trial. The sailor, meanwhile, still serves a gun on Admiral Togo’s flagship.