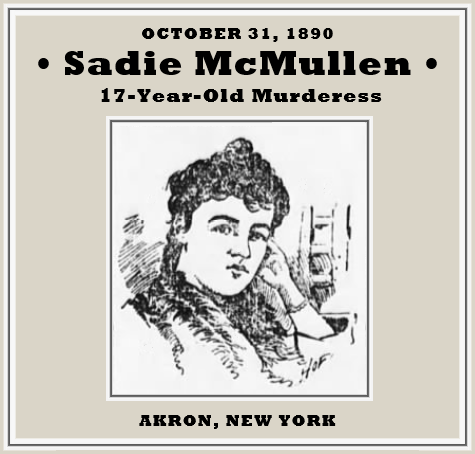 FULL TEXT (Article 1 of 3): Buffalo, November 22. – Pretty, rosy-cheeked Sadie McMullen is in jail in this city, and will soon be tried on the charge of causing the sensational death of little Nellie May Connors, whom she threw off a bridge at Akron on October 31, together with Delia Brown, aged 6, who escaped death. Sadie is 17 years old, and little does she look like a murderess. She is the first woman to commit a murder since the new law made for the disposition of murderers went into effect. The grand jury will investigate Sadie’s case the coming week, and then if she is found guilty of murder she will be the first woman to be electrocuted.

Facts have come to light which go to show that Sadie was in love and her love was not reciprocated. A letter written by the accused girl is an important fact in the evidence. Two hours before she hurled the children off the bridge, Sadie wrote a letter to a friend in Buffalo, in which she said she was going to suicide, but was afraid to die alone and was going to take someone with her. She also said that her spirit would haunt the man she loved forever.

It is claimed by some that she was in love with Simon Brown, father of the little girl who escaped, and that she was jealous of Mrs. Connors, who is a widow and to whom Brown is engaged. It is reported that she was at one time engaged to Brown and they quarreled. It is the general belief that Sadie is insane and the defense will be insanity.

FULL TEXT (Article 2 of 3): Buffalo, N. Y., March 5.— With a smile of self-possession and a merry nod to the court attaches, Sadie McMullen, who is on trial for her life, on the charge of child murder, walked into the Supreme Court room this morning and took her seat before white-haired, kindly old Judge Lewis. Pale and slender as she is, and dressed in exquisite though simple taste, her long brown air falling in thick waves around her face and shoulders, she looks more like a child of ten than a girl of seventeen, who is barged with a most awful crime, and whose life depends on the ability of her lawyers and the mercy of the jury. But he either does not mind or does not realize her position, for every once in a while she turns her face to the sunlit windows and miles as though she were happy and contented. And then she scans the women who throng the court-room, only to sit back in her chair with a weary air as though the whole affair and her presence in court were bore.

Her face, while not particularly intelligent, is pretty. It bears a chic expression which is taking and she has a naive way of pursing up her lips which at times is, quite fascinating. There is nothing in her manners or her features which would indicate insanity or any other spirit than that of peace and girlish love. Yet this pale, slim, childish looking creature is charged with taking two helpless children of four and six and throwing them on a trestle. One of the children was instantly killed. The other lived and testified to-day. The awful act seems to lave been a cruel and premeditated one.

When the accused came into court she wore a cute, little black toque tied and beribboned in a dozen mysterious ways; her hands were covered with long, black, undressed kid gloves, and she wore a snugly-fitting, prettily made gown of ecru henrietta, which displayed every line of her willowy form. She showed not the slightest trace of emotion or surprise, and only once, when her former sweetheart was testifying to-day, did her half-closed sensuous eyes brighten, and then they gilt-colored like live coals.

The jury was completed last night, and the trial, begun early this morning, provides to become one of the most famous and interesting in the history of medical jurisprudence. The defense will endeavor to prove insanity and District-Attorney Quinby will endeavor to prove premeditation. The examining of witnesses will be merely preliminary to the struggle of medical experts which will follow.

When the court-room doors were opened an immense crowd pushed forward. Never in the history of this city has there been so much public interest and morbid curiosity shown. Women were in the majority and young girls were plentiful.

Assistant District-Attorney-Kennepick opened the case and outlined the crime. He told in graphic language now Sadie had on the night of Oct. 31 last, at Akron, a short distance from here, enticed Delia Brown, aged six, and Nellie May Connors, aged four, to the New York Central bridge over Murder Creek; in the center of the trestle she stopped and, in a fearful struggle, threw the babes off to the ground, fifty-two feet below the body of the Connors girl, was found some hours after by a search party; little Della was found a few feet away, badly bruised and unconscious: then Sadie went to a low bridge near by and jumped off. Simon Brown, the father of the girl she had tried to murder, saved her life; the motive would be shown in the evidence, but Mr. Jiennepek insisted that the crime was premeditated, because Sadie had bade good-by to a Catholic priest.

At the afternoon session little Delia Brown was the first witness. A pretty child, with a baby face, she stood the ordeal bravely, and with fatherly tenderness Mr. Quinby asked her questions. She described in detail how she had been thrown off the bridge. She broke down at the mention of her murdered playmate’s name, and sobbed pitifully.

Other witnesses told of seeing Sadie go out with the children and return without them.

The motive for the crime was shown when Mrs. Nancy Morgan, Sadie’s aunt, identified a letter the girl had sent from Akron th day of the tragedy. It read as follows:

“When you got this will be far from earth. I am sick and tired of living. My last hope has gone at last. People accuse me of things I am not guilty of, and I can go in peace, as my heart I leave in Akron with the man I spoke to you about. He seems to not care for me. My brain is longing for the end. If I only had my little brother to take with me. When I am dead I will com to you and explain. Do not fear me. The man I love will know me as a frequent visitor. I think I will take some one with me so I will close my last letter on earth. Please bury me in Akron, so I will be near, my loved one. So good-by. Yours no more.
“SADIE.”

The loved one was Patrick Brown, uncle of one of the children, and the accusation referred to was a letter received the day before the tragedy from the family of George Dunbar, where Sadie had been working asking about some missing articles. Sadie loved Patrick Brown, but was not loved in return. When he testified Sadie’s eyes took on that peculiar glow which is seen who she is interested, and she smiled at him.

The testimony for the defense, as trough out by Mr. E. A. Hayes, Sadie’s lawyer, was poor and weak, and if the girl is acquitted it will not be through Mr. Hayes’s efforts. His handling of his own witnesses is of assistance to the prosecution.. He called Mrs. Morgan and attempted to prove hereditary insanity. It was shown that Sadie’s aunt has been insane fifteen years, a cousin two years and an uncle eighteen years.

Her grandfather, too, was queer in his actions. The testimony will be resumed tomorrow.

The trial will increase in interest hour by hour, until the climax comes with the testimony of the physicians. Peculiar and delicate points of law and medicine are to be solved yet. The prisoner will probably be on the stand to-morrow. At the end to-day she chatted gayly with her lawyer, blinked at the red rays of the setting sun, and went back to her gloomy cell as calmly as thong she were going to her own bed an innocent girl.

[“On Trial For Her Life. - Is Sadie M’Mullen Guilty Of Child Murder? - So Young and So Pretty - Could She Have Done Such a Deed? – What Promises to Be a Notable Case Now Before the Supreme Court at Buffalo – A Great Field Open to Insanity Experts – Meanwhile, Sadie’s Indifference is Hard to Understand.” The World (N. Y.), Mar. 6, 1891, p. 3] 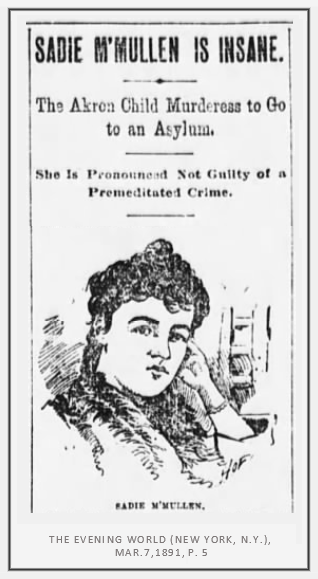 FULL TEXT (Article 3 of 3): At Rochester, N. Y., Saturday, the jury in the case of Sadie McMullen, charged with the murder of little Nellie May Connors, by throwing her over a bridge the New York Central railroad near Akron, N. Y., last October, after being out less than an hour, rendered a verdict of not guilty on the ground of insanity. The judge then ordered her sent to an asylum to remain until cured. It is expected she will be released in a few days. 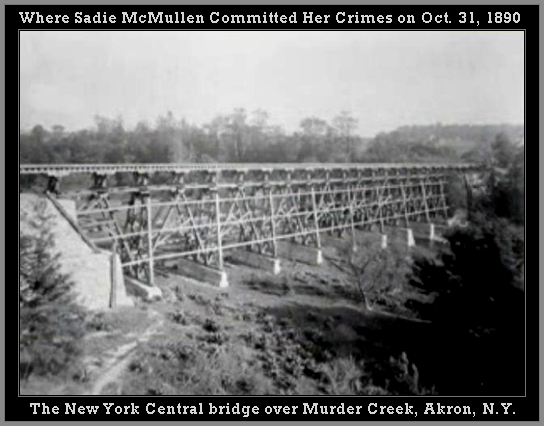