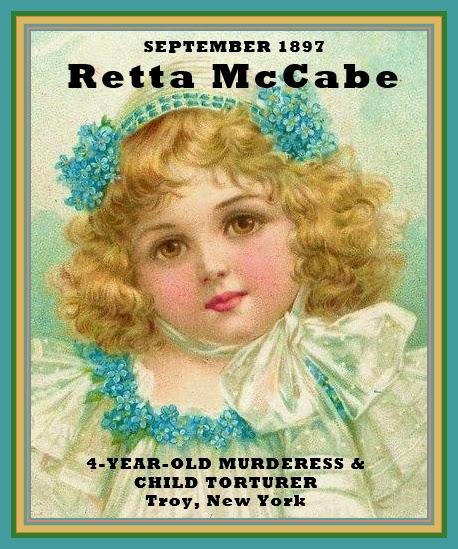 FULL TEXT: Troy, Oct. 21.- The extraordinary case of Retta McCabe, a beautiful blue-eyed, golden-haired child of four years, who has pronounced suicidal and homicidal tendencies, has puzzled the medical fraternity of Troy and vicinity.

The child is a female Jekyll and Hyde. From a pretty, smiling child with laughing eyes and dancing dimples she is transformed in an instant into an uncontrollable little demon. An amazing look of demonical malevolence creeps into her straining orbs, her mouth grows tense and white, her little forehead corrugates itself into a mass of ugly wrinkles and her face is thrust forward with a most repulsive leer. Her clinched hands impotently beat the air and her entire manner resembles that of a wild beast about to spring upon its prey.

While in this mood she fatally injured her infant brother several weeks ago. She seized the helpless babe and hurled it to the floor with stunning force. Then this wicked little creature sprang upon the babe and beat it with all her might. The infant died a week later. And when Retta heard that her baby brother was asleep to wake no more she chuckled.

Yesterday afternoon this strange child was found at the Union Station, many blocks from her home. She insisted upon sitting upon the railroad tracks in front of approaching trains. Passengers waiting in the station saw her peril and several women nearly fainted. The child was dragged from the track. She screamed, bit and fought. The policeman who held her in his arms had to put her down more than once for fear she would seriously disfigure his face.

At the Second Precinct Station-House it was found necessary to place the child in a cell. Behind the massive iron bars she raved and tore madly at her beautiful blond locks.

In a short time the paroxysm of rage passed away and she became a sunny little creature, although, it must be confessed, rather dirty and dishevelled. But her blue eyes beamed with good-nature, a sweet smile curved, her red lips and she was a cooing, joyous creature. A brawny policeman started to take her to the headquarters of the Humane Society, on Fourth street. No sooner was she in the street again than she burst into another violent passion. Whenever she saw a burnt match-stick lying on the sidewalk she darted toward it with strange eagerness. When she reached the society her little hands were full of match-sticks.

She had not been in the custody of the society very long before she manifested remarkable acrobatic abilities. She climbed upon a chair and threw herself to the floor, alighting upon her hands. She turned handsprings all about the floor with amazing rapidity and skill. Her performances astonished the matron and other officials of the society. They could not understand her. She was the greatest freak of a child that had ever come to their notice.

When the child regained her feet after turning a second series of flip-flaps she ran against a door with a force that knocked her down. When the matron went to the child’s assistance and tried to quiet her little Retta turned upon the well-meaning woman and bit her arm savagely. The child broke away from the matron’s grasp and rushed at several children who stood near by and who were too astonished to move. Had not the matron seized the McCabe girl it is almost certain that the children would have suffered injury.

To-day the McCabe child was taken to her home, at Madison and Fifth avenues, in the southern portion of the city. It is not likely that her parents will be able to keep her as she has terrorized all the children in that locality.

One of little Retta’s favorite amusements is to catch children of her own age and stuff buttons and beans into their ears and nostrils.

What to do with the child is a difficult problem for the Humane Society, as Retta is too young to be sent to the Syracuse Institution for Feeble-Minded Children. No children younger than seven years are received there.

[“Child Jekyll And Hyde. – Beautiful Little Retta McCabe Is an Uncontrollabe Demon at Times. – Murdered Her Baby Brother – Possessed with a Suicidal Mania, She Sat Down Before a Railroad Train. – Kicks, Bites and Scratches. – She Stuffs Beans Into children’s Noses and Ears – A strange, Wild, Acrobatic Monster.” The World (New York, N. Y.), Oct. 25, 1897, p. 9] 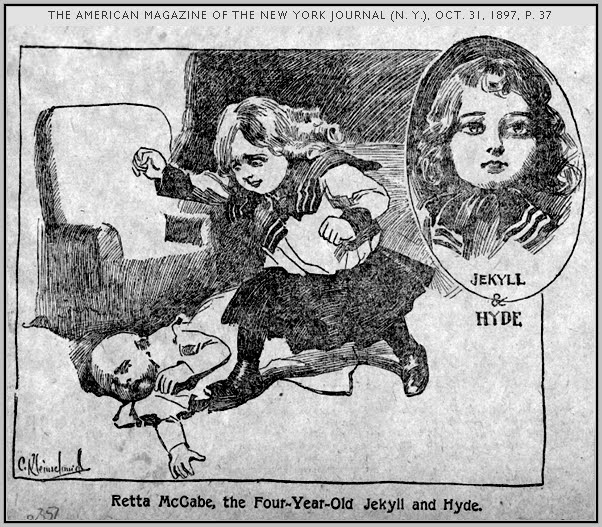 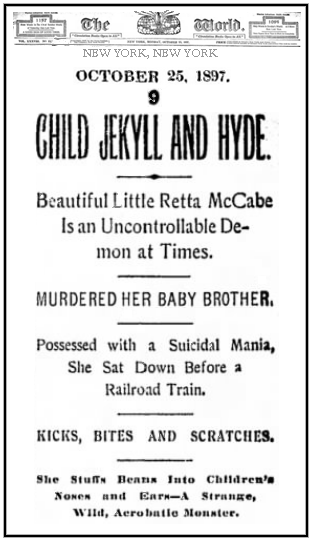 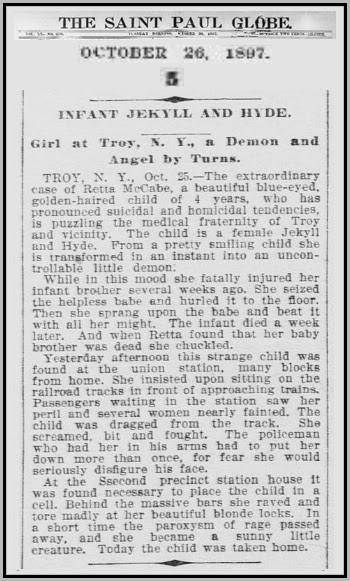 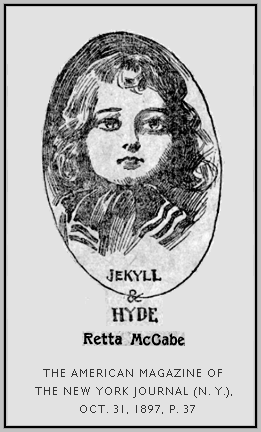