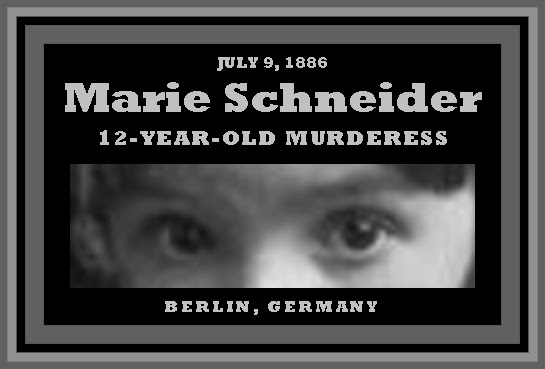 FULL TEXT: Berlin, July 9. – [. . . ] An atrocious murder was committed here today by a girl of about 12 years. The child coaxed another little girl of about 4 years to the fourth story of a house, robbed the little one of her earrings, and then threw her out of the window. The poor creature was killed by the terrible fall. The youthful murderess confessed her guilt, giving us the reason for the deed that she wanted to possess the little girl’s earrings.

FULL TEXT: The trial has just concluded at Berlin of a little girl of 12, named Schneider, who was sentenced to eight years’ imprisonment for deliberately and knowingly causing the death of an infant playmate, aged three and a half. The details of the trial were most revolting, and bore out the opinion of an expert in medical jurisprudence that be had never heard of such an instance of human depravity m any criminal so young. Coveting the earrings of her playmate, which she meant to sell for sweetmeats, this little girl Schneider decoyed her victim up several flights of stairs, secured the trinkets, and then pushed their owner out of an open window. Schneider’s answer to the judge on questions of religion, law, morality, death, and life showed that she was perfectly conscious of the nature and consequences of her deliberate crime.

EXCERPT: I will now give, in some detail, the history of a more decisive and significant example of this same moral insensibility. It is in a child, and I take it from German records. Marie Schneider, a school-girl, twelve years of age, was brought before the Berlin Criminal Court in 1886. She was well developed for her age, of ordinary facial expression, not pretty, nor yet ugly. Her head was round, the forehead receding slightly, the nose rather small, the eyes brown and lively, the smooth, rather fair hair combed back.

With an intellectual clearness and precision very remarkable for her age, she answered all the searching questions put by the President of the Court without hesitation or shrinking. There was not the slightest trace of any inner emotion or deep excitement. She spoke in the same quiet equable tone in which a school-girl speaks to her teacher or repeats her lesson. And when the questions put to her became of so serious a character that the judge himself involuntarily altered his voice and tone, the little girl still remained self-possessed, lucid, childlike. She was by no means bold, but she knew that she had to answer as when her teacher spoke to her, and what she said bore the impress of perfect truth, and agreed at every point with the evidence already placed before the court. Her statement was substantially as follows:—

That was what little Marie Schneider told the judge, without either hesitation or impudence, in a completely childlike manner, like a school-girl at examination; and she seemed to find a certain satisfaction in being able to answer long questions so nicely. Only once her eyes gleamed, and that was when she told how in the prison they had given her dry bread to eat. The medical officer of the prison, who had watched her carefully, declared that he could find nothing intellectually wrong in her. She was intelligent beyond her years, but had no sense of what she had done, and was morally an idiot. And this was the opinion of the other medical men who were called to examine her. The Court, bearing in mind that she was perfectly able to understand the nature of the action she had committed, condemned Marie Schneider to imprisonment for eight years. The question of heredity was not raised. Nothing is known of the father except that he is dead.

Marie Schneider differs from the previous cases, not merely by her apparent freedom from pathological elements, but by her rational motives and her intelligence. The young French woman intended nothing very serious by her brutal and unfeeling practical jokes. Marie Schneider was as thorough and as relentless in the satisfaction of her personal desires as the Marquise de Brinvilliers. But she was a child, and she would very generally be described as an example of “moral insanity.” It is still necessary to take a further step, although a very slight one, to reach what every one would be willing to accept as an instinctive criminal.