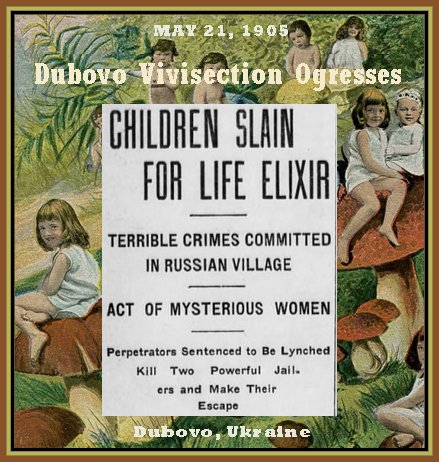 FULL TEXT (Article 1 of 2): Moscow, May 21. – A dreadful story of crime that eclipses the iniquities of the notorious Mrs. Dyer – horrors the imagination of an Allan Poe or De Sade never surpassed – comes from the village of Dubovo [Ukraine], on the Don.

Six months ago two women of gigantic stature took a furnished house on the main street, and ever since their movements have been exceedingly mysterious. They were seldom seen in the daytime, but occasionally a belated wayfarer met them striding along the country roads at night.

On Christmas day the little 4-year-old daughter of the village blacksmith, a man named Petrokoff, disappeared while carrying her father’s midday meal to the forge. The child was a general favorite, and the whole village turned out and scoured the country, but in vain. Five days later the baby daughter of the starpsta, or innkeeper, vanished from her home during the momentary absence of her mother. Nothing more was heard of the infant, and again there was no clew to the mystery.

During the month of March five more children vanished unaccountably. The terrifying news spread, and the village was shunned by the peasants of the surrounding country, and called “Dubovo the Damned.”

Recently the horrible mystery was explained. Screams were heard to issue from the home of the two women. Suddenly the door flew open and the viragos, locked in each other’s arms, bleeding and disheveled, struggled out into the road. They fought desperately, and both appeared to be the worse for vodka. Eight strong laborers carried them clawing and screaming like furies to the village police station.

A caretaker was thereupon sent to their house in, the main street. A few minutes later she was seen running down the road, gibbering in a paroxysm of fear.

A crowd of villagers thronged, into the mysterious house. In the cellar they discovered a long table, furnished with clamps and straps. Surgical knives protruded a cabinet on the wall, and rows of bottles filled the shelves, which entirely covered one end of the room. Further search revealed the body of a baby girl who had disappeared eight days before.

The two fiends in female form admitted at the police station that they had come to the village purposely to prosecute scientific research. They belonged to a secret society which had for its main object the discovery of the elixir of life. According to their theory, child life was cheap in comparison with the importance of their investigations.

A village council was called, and was decided to lynch the disciples of human vivisection at noon today [May 21, 1905]. The women were stripped and fastened by strong chains to an iron bar in the wall of their cell. At daybreak this morning it was found that they escaped in the clothes of their jailers, both of whom, though powerful peasants, had had their heads battered in and their throats cut and were dead. The police are searching Russia [Ukraine] for these revolting criminals.


FULL TEXT (Article 2 of 2): Throughout the middle ages there were current tales of men who caught ana sacrificed babies in their unholy pursuit of knowledge. Recently stories or a somewhat similar kind have been revived in China as part of the crusade against Americans. Here is a yarn of the same character from Russia: “Two women of gigantic stature took a furnished house in the principal street of the village of Dubovo. They seldom went out in the daytime, but were often seen in town and out on the country roads at night. On last Christmas day the four-year-old daughter of a blacksmith mysteriously disappeared while carrying his midday meal to her father’s forge. The whole place and the surrounding country were scoured in vain, for no trace of the little one was found. Five days later the baby daughter of an inn keeper vanished. On February 4 the twin children of a widow went to slide on a pond, but failed to return. Search resulted in the discovery of a large hole in the ice, but the bodies of the children could not be found. During the month of March five more children unaccountably vanished.

“On April 21 the solution of the terrible mystery came. Screams were heard in the home of the two women. Suddenly the door flew open and they appeared locked in each others arms, bleeding and disheveled. They were fighting desperately, but eight strong laborers carried them, clawing and screaming like furies, to the police station. A caretaker was sent to their house, but a few minutes later she was seen leaving the house in a paroxysm of fear. The place was soon thronged with a crowd of curious people. They discovered in the cellar a long table furnished with clamps and straps. A cabinet on the wall contained surgical knives, while one end of the room was covered with shelves filled with bottles. Further search revealed the body of a baby girl who had disappeared eight days before. Upon examination the two prisoners stated that they had come to the place to prosecute scientific research. They belonged to a secret society which had for its main object the discovery of the elixir of life. They considered child-life cheap in comparison with the importance of their discoveries. The women were then fastened by strong chains to an iron bar In the wall of their cell. The next morning it was discovered that they had escaped during the night in the clothes of their jailers, both of whom were found dead with their heads battered in and their throats cut. The women are still at large.”

[“Seeking ‘Elixir of Life’ – Terrible Story That Comes From Russia Reads Like a Tale of the Middle Ages – Lives of Young Children Sacrificed,” The Index (Hermitage, Mo.), Sep. 7, 1905, p. 2] 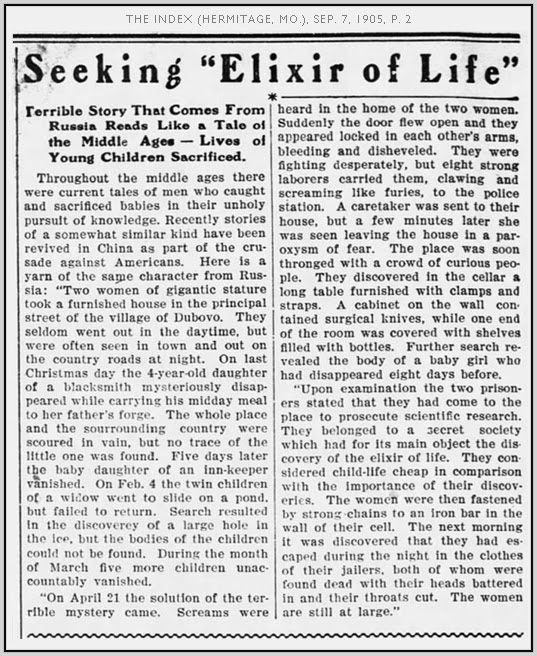 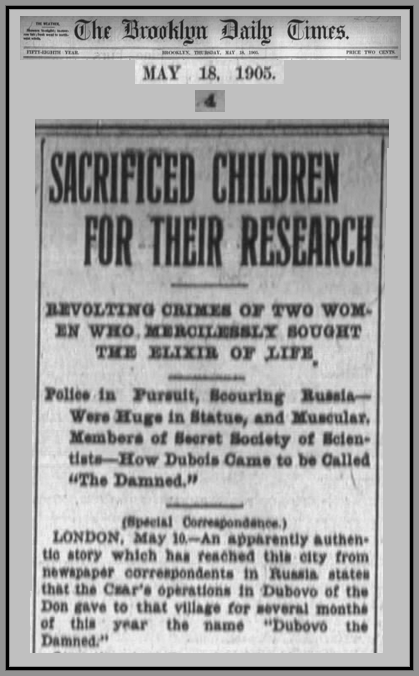 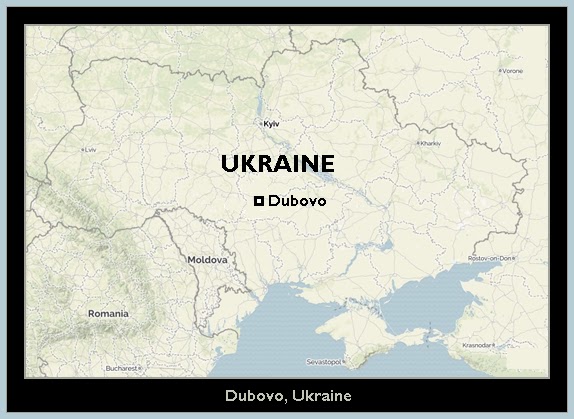